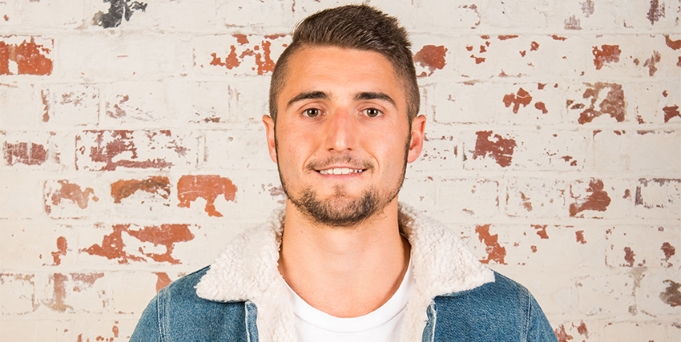 After searching for a non-pretentious and less complicated watch while shopping for a friends birthday present, Robbie Ball decided to take the matter into his own hands and start designer watch brand Uncle Jack.

Co-founding the business with Richmond footballer Brandon Ellis, Ball quickly learnt just how much demand there was for the brand’s watches, as the business was left scrambling to order more stock after selling out its first launch within a few days.

Today the business turns over upwards of $1.4 million and has shaken off its early stage challenges to become a successful local watch brand, with Ball landing himself a spot on SmartCompany‘s 2017 Hot 30 Under 30 list earlier this year.

Ball spoke to SmartCompany about the importance of social media when growing a product-based business, and how the founders landed a collaboration with supermodel Megan Gale.

We launched Uncle Jack in September 2014, after six months of planning. There were three of us involved then, not all of us in the day-to-day capacity, but the businesses was funded by the three of us.

My co-founder is Brandon Ellis who plays for Richmond in the AFL. We’ve known each other since we were eight, and we played against each other in footy before we partnered up.

His influence has helped tremendously in the business, and it’s been great to be able to utilise his network when we need to. Today the brand itself has really grown its own legs, but in the beginning, if he were to post a picture on Instagram, it would be huge.

The Uncle Jack brand has really come into its own over the last two years, so we’re not reliant on his exposure anymore, but in the first six months, it was a nice thing to have access to.

Before I started Uncle Jack I was running my own web design and online marketing business as well as studying a Bachelor of Business at uni. If you take the product out of Uncle Jack, a lot of online marketing skills are transferable across different types of businesses.

The idea for Uncle Jack came when I was looking for a watch for a friends’ 21st birthday. I was walking through a shopping centre and it became apparent the watches available at the time were not targeted to me or my peer group.

Most of them were pretentious, overpriced, and over complicated. Who needs six dials on one watch?

I knew I could create something more targeted to people my age.

There was a lot of learning involved in the early days, as you have to become an expert in the product to really understand the market and why people buy watches. I don’t really use a watch to tell the time, for me it’s a fashion statement.

Much of it was understanding consumer behaviours and why people purchase watches. A lot of our customers purchase them as gifts, so it’s around the motivation behind that; what makes it a good gift? It was a lot of learning.

Early on we weren’t ready to grow as quickly as we did. We had a lot of growing pains, which dragged on longer than we would have liked.

For example, when we launched, we sold out of our first order within a few days and we had no plans for a re-order. That left us with a couple of months of just getting people to sign up for the next launch.

It was not ideal to not have stock for two months, but in the end, it shaped our business model. We began to order only what we needed, sell it out, and then order again.

We became quite lean through this, and we weren’t going and ordering 10,000 units and trying to sell them. It’s worked really well for us as a model.

Today we don’t operate on quite the same scale; it’s more about shorter, more frequent collaborations. We’ve done ones with Megan Gale and some local artists, and we’re constantly wanting to bring out new things customers want to buy.

We’re at a price point where customers can afford to buy three to four watches a year in different styles.

We landed the collaboration with Megan Gale through Brandon’s network, as Brandon plays with Shaun Hampson who is Megan’s partner. The timing really worked well as we got Movember on board, as they both have strong connections to the organisation.

In the end, we got nationwide exposure. The most notable time for me was when Megan was on the Today show talking about our watches on national TV.

The way the business operates today is a lot different to how it did when it started — it’s not just me sitting there dispatching orders for five to six hours a day. We have a small team that works on the business full time; we’ve really grown and scaled.

Hiring people for the business was daunting, but at the same time we’ve made it easy. We have such a good customer database and social media following to tap into that it’s really effective for us to hire people who are already customers and who already love the brand.

In the first 12 months to two years of the business, social media has been super important to help us get the word out there, especially early on. You can’t launch a product to crickets.

Now it’s about diversifying and implementing other strategies outside of social media because you have to remind yourself you don’t own your social media accounts. Instagram’s recent algorithm changes have affected a lot of businesses, and an email database can’t be the sole way you communicate with customers.

I’ve recently been able to launch a separate business to Uncle Jack, an Australian sneaker brand called Athletikan. It has been something I’ve wanted to do and I’ve been planning for a couple of years.

I saw a gap in the market, especially in Australia, so we’re hoping to be the first athleisure sneaker company here. They’ve gone crazy in Australia and all over the world, so it’s really surprising that it hasn’t been more common locally.

We’re going to launch with an open mind. We’re not the type of people who need to make x amount of sales — we haven’t set any strong expectations.

We’re going into it pretty excited, and we just want to have a bit of fun with it, and see where the journey takes us.

We’re launching a global online store in July that will allow us to better serve customers outside of Australia, so that’s been a good project. We have a strong customer base and demand in the US, Canada, and the UK.

Our goal is to make it as easy as possible for people to purchase from us, and while online is a big component for us, we’re looking at in-store offerings, and even exploring getting our own store.

It’s been an unbelievable increase in competition, but that’s good for us as it validated what we’re doing. Now it’s really about refining and producing what the customers want.

As founders, we really need to keep the big picture in mind, as it can be so easy to get caught up in the day-to-day running of the business.

Owners trying to scale the business should step back and identify where you need to hire people, and then do it and let your business grow.

Sadly it seems this fast fashion has even evolved into watches, we have seen it in the clothing game now it’s gone to watches, nothing but a race to the bottom.