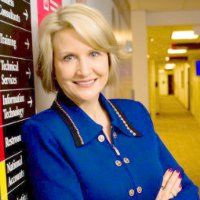 Catherine Monson is the Dallas, Texas-based chief executive of FASTSIGNS International. Aged in her early 50s, Monson has overcome adversity to head up the global franchise which operates sign, graphic and visual communications centres.

FASTSIGNS turned over $374 million ($US343 million) and has over 4000 employees worldwide. The franchise operates from 550 locations in nine countries, with its Australian business, SIGNWAVE Australia, recording revenues of $13 million last year.

I grew up in an abusive alcoholic home and I know lots of people have had similar challenges.

As a young adult I suffered a lot from depression and I was blessed to have some very good therapists.

The most important realisation that I came to was I became aware that life is going to throw a lot of crazy things at everybody, but it is how we react to those hardships that is so important.

I learnt that rather than drawing on the negative I would look to the positives. There are common characteristics of all highly successful people and the most important one is a positive attitude and the second is goal-directed behaviour.

My first role was spending three years as a buyer, but I realised purchasing agents never become chief executive.

Back in late 2008 when the chairman of the private equity firm which owns FASTSIGNS gave me a call he had heard of me because of my board service at the International Franchise Association.

I accepted the role in Jan 2009. You can imagine for any new chief executive it’s an exciting time to take over a company in the midst of the global financial crisis, but it was a great opportunity as people were open to change and to growing their business.

In Australia we trade under the name SIGNWAVE as a smart Australian businessman in the US saw the success of FASTSIGNS and came down here and used the same name, so we had to open under a different name.

What we are really good at is that we help franchisees compete with the big guys. Our people understand the latest marketing trends, the best visual solutions.

In Australia we are now at 17 locations and I would like to double the volume here and grow their profitable sales. I feel we can get to 45 or 50 markets in Australia.

We have the right team in place now. We have franchised the country to new master franchisees and they are smart, savvy businesspeople.

I hire great people who understand what their function is. I reward them with recognition and positive reinforcement and financial incentives that are tied to the company achieving its objectives.

My one very critical piece of advice for franchisees is that it is so important to have a business plan. I don’t mean it has to be 100 pages; it can be three or four. Even the smallest company needs to have a business plan and every single month they need to review financial statements prepared on the accrual accounting method and compare it to the actual. That is the single most important discipline for small business success.