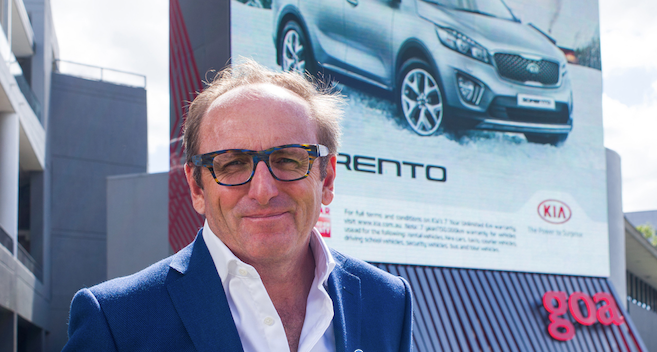 Chris Tyquin took over Goa Billboards in 1989 from his father, and since then has grown the family business into Queensland’s largest billboard provider. The company’s billboards can be seen from the Gold Coast to Cairns, and the company has operations in Sydney.

Goa Billboards evolved from static to digital billboards in 2009 and now offers live updates to clients using their boards, alongside Twitter and RSS feeds. The company turns over around $30 million annually.

SmartCompany sat down with Tyquin to hear about the advantages – and challenges – of running a family business.

My father started Goa Billboards in 1983.

I came on board on 1989 after my father came down with some health issues. He was going to sell the business, so my brother and I came back. We had no plans to get into the business, but through his sickness we ended up in it.

I didn’t have any experience running an out-of-home business. I was working for Channel Nine in Sydney at the time and I’d been there for about eight years. I was familiar with the sales side of media, but managerial and administration was not my area at all.

About five years ago I was at a CEOs conference ran by ex-vice chancellor of Bond University, Ken Moores and he asked me: “You launched the first digital billboard network in Australia, how much risk was there?”

Because no one had really done it before in Australia, from our perspective there was a lot of risk.

Ken asked “Did you ever wonder why it was you that did it and not one of your big corporate competitors?” The answer was easy.

If you’re in a big corporation and you fail on the launch of the first digital billboard in Australia, you won’t still have your job. In a family business, there’s a good chance I’d still have my job.

That’s the big competitive advantage of being a family business.

If you’re not staying ahead, you’re falling behind.

We’re playing in this market in a David vs Goliath nature every day. We have to be nimble, and we have to work out ways to compete.

There’s a degree of brevity that comes with running a family business. You can perform, you can have failures, and you can have setbacks.

I tend to be a bit cold-blooded. A lot of family businesses have succession issues, which are often deeply rooted in a lot of emotional issues that can overwhelm rational business decisions.

When you arrive at work, leave your bloodline at the door. Treat your family members like any other staff.

When I came on board we were still hand painting metal panels and hand screen-printing posters. Our installers had a big bucket of glue, a brush and a squeegee.

Some of the sign writers were truly brilliant, artists in their own right, and it could take up to two weeks to hand paint a billboard

In the early 1990s we had the advent of the computer printed skin, which is what every traditional billboard is these days. These computer-generated skins could be done in an hour. We couldn’t email them back in the early days, so they were all delivered on disks.

That was the first big breakthrough.

I switched on the first digital screen in October 2009. It had been in a secret location undergoing 24/7 testing for 12 months leading up to that date.

Now we’re the first in the country who can go live to market in 60 seconds; that’s how good we’ve got it now.

With the weather that hit Queensland in the last few weeks, we had the media on the phone wanting to get messages out to not drive through floodwaters. We could get that live to market quicker than they could get their online warnings up. This is all through our Goa Connect service. We can drive an RSS feed and a Twitter feed, and it’s all entirely automated.

We wanted to give clients the freedom to drive their own content that they themselves or their clients produce.

Our first foray into this was the State of Origin three years ago. There was someone in Sydney sitting there with an iPad and they were updating the scores onto our network live.

In 2014 three kids in their 20s came and saw us because they wanted to run a positive information campaign during the G20 in Brisbane. The campaign was to broadcast different ‘Jesus loves’ messages across billboards in Brisbane. They crowdsourced the $40,000 campaign in just three days.

What we saw with digital was a far greater level of engagement and immediacy. The campaign got over 500 Instagram likes in the first five hours.

That’s the direction we need to head. We want to actively encourage people to regularly change their copy, for whatever reason.

These days everything is to do with content. Screen quality is as good as it’s going to get.

The days of building a rectangle billboard on a stick are over. Since I’ve got here, I’ve tried to work on enhancing the visual amenity of the environment.

My vision is a move towards more artistic billboards. The billboard medium has to get to the point where it enhances the environment it sits in.

The canvas is no longer limited to the 20 square metres of LED screen. For our new billboards coming out, we’ve made it so clients can choose the colour of the whole structure. It actually looks like they own the structure while the ad is up.

I think there is an opportunity to take the passive ‘passer-by audience’ to an audience that is actively engaged. That’s where the next frontier may lay.

People consciously sit down at night to read the newspaper or watch the news; they don’t consciously get in the car to go look at billboards. I’m not saying they ever will, but I do think we can get more of them looking out for what we’ve got on our screens.

The idea for Goa Connect came from two graduate students who had been with us for six months. It didn’t come from any specialist innovation department. These girls were working in sales support and they’re still with us today.

I’m 53 and I am in no way across where all these trends are heading across social media and online. That’s why I’ve got people working here who are.

You can’t force innovation. You need to create an environment where people feel comfortable to put their ideas through.

Looking back, I would have had the courage to ask a lot more dumb questions.

If you look at the CEOs of big firms these days, most of them come from the financing side of the business. That needs to be a grassroots thing. Early on in the business, you have to get yourself across the numbers.

I wish that I had Ken Moores’s comment to me many years earlier. It was a key component in me realising that we do have a competitive advantage as a family business.