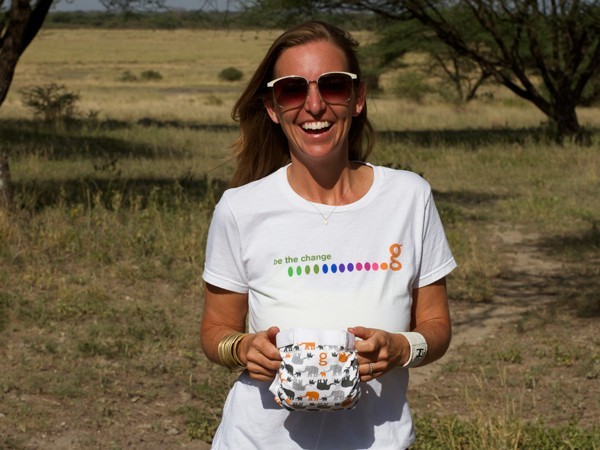 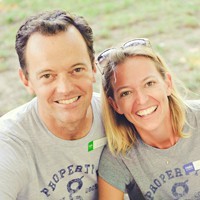 Sydneysider Kim Graham-Nye was having breakfast with her husband Jason one morning in 2002 when the idea for their now multinational business gDiapers came about.

Graham-Nye was pregnant and the pair was discussing the estimated 500 years it takes for disposable nappies to biodegrade.

The year 2002 was also one in which Australia was going through an extended drought and for Graham-Nye the idea of wasting water on washing cloth nappies was confronting.

It began to hit home the couple were having a child that one day would look to them for answers about who was responsible for the “never ending rubbish” in the world.

“It was still only cloth or disposal [nappies], there was no alternative. [It was] ludicrous. We thought this space is so ripe for innovation, people are looking for alternatives.”

While Graham-Nye says the couple were “green leaning but not dark green”, the idea behind gDiapers – to produce “biodegradable, flushable, home compostable” nappies – seemed like common sense.

The pair met a “brilliant tech out of Tasmania”, a biochemist who came on board with the idea of working with them exclusively to create such a product.

In 2004 the Graham-Nyes took gDiapers to the US, which proved a wise move. The business enjoyed solid year-on-year growth and the success also saw Graham-Nye named Fortune Magazine’s eighth most powerful female entrepreneur in 2011.

The business now turns over more than $1 million annually.

Graham-Nye says some of the biggest challenges she has faced in the business came at the very start, including the delays the couple experienced in getting to the US.

The second challenge came not long after they arrived, when Graham-Nye was heavily pregnant with her second child and an important round of funding fell through.

“We had two million coming in from one particular investor,” she says.

The money was continuously delayed and it got to a point where the Graham-Nyes had set up a meeting with lawyers.

When the deal was almost done and the funds were about to be transferred, the unthinkable happened – the investor passed away.

Graham-Nye says the unfinished deal left the couple with bills in the hundreds of thousands and no means to pay them.

“We were panicking, thinking we will go under before we start.”

At the last minute an angel investor stepped in and wired the money – no questions asked.

“The money hit then my water broke, I went into labour,” she says.

Overall, the Graham-Nyes spent 10 years in the US and “getting G up and running”.

The family came back to Australia on Christmas Eve last year, and the Graham-Nyes now run their global business from home in Bondi, managing 13 employees in the US, five staff in the UK, two in Germany, four at a new base in Korea and two in Australia.

SmartCompany chats to Graham-Nye about how those challenging early days helped change her day-to-day life in positive ways and why she’s happy to be back in Australia.

With the family now based in Sydney and gDiaper’s headquarters still in the US, Graham-Nye’s days typically start early but on the day she speaks to SmartCompany her day had started even earlier than normal.

“The team (in Portland) were having a wear your pyjamas to work day today,” she says.

“I joined them at 3am for a half hour Skype session. I don’t usually do that.”

Graham-Nye usually gets up at 4am to conduct meetings with the US team at 4.30am from Tuesday to Friday and once the children are up, Jason takes over parenting duties.

“I usually stop and have a tea with them,” she says.

“Then I work generally with the US team until 9-10am, at which point I will start doing my own work for a bit or doing some yoga.”

But despite the long hours, the entrepreneurial couple set aside time for “catching up on the week or big vision stuff”.

“On Fridays we always stop and do lunch, with that we have two hours blocked in,” she says.

“We call it our ‘best you’ time, it’s about each of us being at our best and checking in.”

Graham-Nye’s daily life has changed a lot in recent years, she says, recalling some “dark days” about two years ago which led to some life-changing experiences.

“I was absolutely exhausted trying to be business owner, wife, daughter, friend,” she says of the time.

“It was not at all sustainable. When you start a startup you’re so pumped on adrenalin… but you can’t do that year-in, year-out.

“You go in there thinking in three to five years it will calm down. It never calms down.”

Graham-Nye says the same problems kept cropping up and the stress of running the business only caused her to get further rundown and sick.

“I couldn’t look up, I kept on getting stuck in the detail,” she says.

“I took a big, long breath; time to reassess who I am as an individual.”

Graham-Nye says while difficult, the time taught her the importance of realising the difference between just meeting needs versus something more sustainable.

“We used to say how can we care so much about sustainability and give our employees so much, yet sacrifice our own (sustainability),” she says.

She also learnt some valuable things about herself as an entrepreneur.

“My best skills are creating something from nothing and looking at new projects for the team,” she says.

“If you’re stressed and looking down, you don’t see clearly or very far.”

Graham-Nye says the biggest thing “the trip” taught her was to reframe her work life balance.

“It was about changing the framework to realise, for example, when I had my second baby, I didn’t take love from one (child) to give it to the other, so why would I do that in my life?” she says.

“I now look at life holistically; that I am a mother and also a woman. I need to keep filling my own cup and what gives me joy.”

Graham-Nye says she has also shifted her work mindset from “I’m giving this everything I have” to “what does it take to be at my best”. She also considers what recovery might look like after a period of intense work.

“If you are at your peak performance you can try and make the best possible decisions on a day-to-day basis, but this is unrealistic unless you build in recovery time,” she says.

The end of Graham-Nye’s day is structured and based on family time, with both herself and Jason doing their best to finish work and be home by 3pm.

“We love being home at 3pm, we love finishing the day with the kids,” she says.

“Jason will keep working until about 5.30pm,” she says.

Leisure time in the Graham-Nye family isn’t so much about constant activities as it is about having dinner, sitting around chatting and occasionally going for a sunset beach stroll.

Even with her children a bit older now, Graham Nye says she is “amazed” at how much her entrepreneurial values have already rubbed off on them.

“They’re looking forward to having jobs because they see we love our jobs,” she says.

The family’s new life in Australia, particularly in Bondi, is also a big plus for Graham Nye, who says she likes to take time during the day to appreciate it.

“Australia draws you out (side) naturally,” she says.

“Life in Bondi is so simple and so calm; it’s a huge sense of abundance and being full of possibility.

“It’s stunning. I love being here, going to yoga, going for a walk, that feeling of having room in the day. Time feels abundant. It’s glorious.”

Graham-Nye says while gDiapers has only recently expanded into Korea, the expansion into the Asian market is likely to net the company its biggest growth thus far. She predicts the Asian market will generate 20% of gDiapers gross revenue in the future.

Plans are also in full swing for the next phase of gDiapers, with Graham-Nye excited to be able to work with the Australian market and enjoying Australians’ “give it a go” attitude towards innovation.

A second gDiapers product, created by the same biochemist as the original, that was patented in 2007 has given them the licence to use the product, which is currently undergoing testing, in Australia, Graham-Nye says.

While Graham-Nye is mum about the exact details of the second gDiapers product, she says there have been trials in Melbourne and more trials to be held in Canada later this year.

There are also plans to start looking at how gDiapers can work with institutions such as childcare centres to try stop some of the waste produced by disposable nappies.

“Nappies and wipes are such a massive issue from a waste standpoint (at childcare centres),” she says.

“We’re talking five nappies a day per child at a childcare centre.”

Graham-Nye says gDiapers is looking at how to create a “closed loop” bin system for nappies on site, potentially producing soil that could be used for other purposes.

“Either way the centre has to pay for the disposal of them (nappies),” she says.

“Not only are you reducing landfill, you’re creating a resource. I’m incredibly excited about that.”