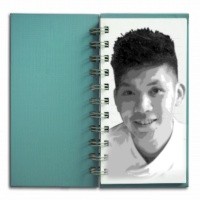 Twenty years ago Bernard Chu was making a mess playing with sugar and flour in his grandfather’s Malaysian bakery. Today, he’s worked with some of the world’s best chefs, has appeared on hit show MasterChef and co-founded his own Melbourne-based patisserie LuxBite.

After finishing secondary school, Chu studied hotel management at college in Malaysia and earned himself an apprenticeship at the prestigious Shangri-La Hotel in Kuala Lumpur. He worked for free for a year in a tough environment, but he learnt the necessary skills to make it in the industry.

Following his apprenticeship Chu and his girlfriend and business partner Yen moved to Sydney and completed a patisserie course at Le Cordon Bleu. At the time Chu was one of only 12 people in his class, selected out of a group of applicants globally.

“Everyone in the industry will say the peak of your career is when you run your own place… but everyone says that and to actually take that step was really hard,” Chu says.

“Yen and I were young, but we knew we’d do it one day. So we decided to learn from a lot of people when we were really young.”

Following his course at Le Cordon Bleu, Chu went onto work at highly regarded restaurants such as Lo Studio, The Pier and Comme, where he worked 90-100 hour weeks. Working at these restaurants taught Chu the “etiquette of cooking”.

In 2010 Chu and Yen decided to take the plunge and start their own venture, LuxBite, a patisserie now famous for its colourful macaroons, cakes and the famous Lolly Bag cake which featured on the 2013 season of MasterChef.

The business now turns over $400,000 and is looking to expand its range. SmartCompany spoke to Chu about collaborating with the competition, how he created the Lolly Bag cake and how he’s changing the culture of the cooking industry.

For Chu, his days are all about work.

“I get up at 7am, I’m a boring man, I take a shower and then I walk to work. At the moment I live close by to the shop and I buy a pastry on my way to work. At work I get to create and it’s just like a playground.”

Chu’s team takes care of the daily preparations, while his job is to create new flavours of macaroons.

“We believe you have to have the love when you make them. I pass this onto my assistants and they make them on a daily basis.

“A lot of the time the inspiration comes from childhood memories. Opening your own place is about sharing what you love to the general public. I try to replicate what I used to like, but the ingredients I need are from limited sources in Australia.”

LuxBite produces around 4000 macaroons a week, as well as hundreds of slices of cake.

Following the success of LuxBite and Chu’s reputation in the industry, he was approached by MasterChef producers to create a cake recipe combining six classic Australian lollies – mint leaves, bananas, red skins, jaffas, freckles and musk sticks. This kick-started one of Chu’s toughest culinary challenges, as he spent two weeks toying with the ingredients to make the flavours come together into a delicious cake.

“It was tough because I didn’t share the same childhood memories as everyone else with the lollies and you can’t just put all the lollies together, as they react to heat in different ways,” he says.

“The first thing I did was go to the supermarket and buy all the lollies. Musk was the worst thing I’d ever tasted in my life. I almost called them and said I couldn’t do it because it was so awful. But for me it wasn’t about going on TV, it was about creating something delicious and sharing it with people.”

To conquer his hatred of musk, Chu turned it into a musk marshmallow and lightened the flavour. Instead of the traditional orange jaffa, Chu gave it an Asian twist to suit the LuxBite brand and did a mandarin flavoured chocolate and also added a layer of hundreds and thousands. The spearmint leaves were a challenge as the gelatine turned it into a paste when heated, so instead Chu created a spearmint flavoured cream (for which his secret ingredient was eucalyptus oil). The red skin layer formed the outside of the cake.

“I’ve created so many happy faces with this cake,” he says.

Since the cake appeared on MasterChef, 3000 slices have been sold.

One of the biggest challenges for Chu starting out was learning how to operate a patisserie in contrast to a restaurant.

“In a patisserie the technology is really different to in a restaurant. We had to learn how things would travel in boxes and how to store things; it was a very big challenge.

“I didn’t have any real experience in a patisserie, but Adriano Zumbo has helped me so much with everything from how to price a cake, to how to market cakes. When we first started it was a new concept because we put Asian flavours into the macaroons, so it took a while to convince people. They’d come into the store, have a look, but not buy anything.”