How Paul Sadler swam his way into a $25 million business 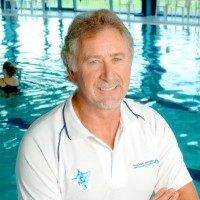 In the mid-1970s, special needs school teacher Paul Sadler had a passion for teaching kids how to swim. He taught at a local pool on Saturdays, and soon found he was making more money than he did in the classroom, so figured he was on to something.

He set up Paul Sadler Swim School in Brighton, Melbourne, and methodically built up a training system to get babies and toddlers to tread water, and parents were lining up to bring their children in for lessons.

Over the years business thrived and in 1995 he purchased a business called Swimland, so the company became known as Paul Sadler Swimland and it doubled in size overnight.

More than 40 years later, Swimland has around 15 schools in Australia through a franchise model and operations in Canada.

The company employs 600 to 700 people and turns over around $25 million each year.

Sadler tells SmartCompany of the highs and lows, and why his success has stemmed from a love of teaching, not from chasing a fortune.

In the early 1970s I looked up and saw all these mums sitting around the pool, and realised that everyone was putting up pools (in their homes) and there wasn’t much education for parents about surveillance of  your kid…and there was a real spike in drownings.

It occurred to me, what is the most important tool we could teach a kid? It was to not drown. So I set about finding a way to teach the basic skill of treading water. I realised the smart way to do this was to use artificial buoyancy aids.

I developed the psychology around that, and created a structure around that…with certificates for achievement. I thought, this survival stuff was the future of this business.

In the mid-seventies there was no handbook on how to start a swim school. I started the Swim School Owners Association with a colleague, and we kept that going for 30 years.

When you come from a school-teaching background, there is not one of part of the course that teaches you to become a business owner…it is skills that you acquire.

Rather than have a big picture plan of where I thought I would be in one year, three years or five years, I would think of whatever income would come in, and my expenses for the week, and calculate it in a one-week stance. It showed me how into survival you were, not having any business acumen.

thanks, I collected a lot of information CGS Caulfield Grammar School wheelers hill junior school 7B