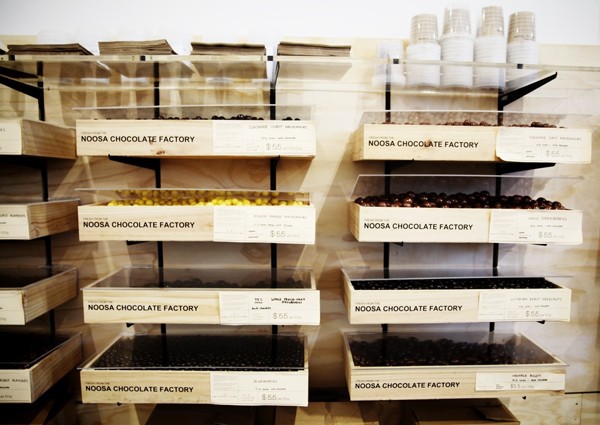 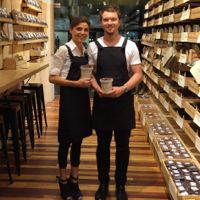 Based: Brisbane and Noosa

For Chris Thomson, making and selling chocolate is a family affair.

It started with Thomson’s grandfather Charlie, who invented many of the iconic Allen’s lollies such as Redskins and Minties – even coming up with the pattern on the back of the Allen’s jelly snake – before managing chocolate brand Red Tulip for a number of years.

His son and Thomson’s father, Gordon, took over the reigns at Red Tulip until it was sold to Cadbury in 1987 and then managed several other chocolate making factories.

It’s no surprise then that when Thomson opted not to continue in the field he studied at university, his thoughts turned to starting his own chocolate business with his partner Amy Sargeantson.

But it wasn’t just his family’s chocolate making pedigree that led to Queensland-based Thomson becoming a business owner.

“From an early age I had some pretty mediocre jobs in restaurants, washing dishes, it does set you up from an early age to want your own business,” Thomson told SmartCompany.

“I went to boarding school down in Melbourne and there were a lot of kids from family business there too.”

The business Thomson co-founded is Noosa Chocolate Factory, which was ranked seventh on this year’s Smart50 list of Australia’s fastest growing SMEs.

Founded in 2012, Noosa Chocolate Factory operates one factory in Noosa and four retail outlets around Brisbane and employs a staff of 19.

The company turned over $3.33 million in the 2014-15 financial year and has grown by approximately 435% over the past three financial years.

Thomson founded the business with his parents, Gordon and Pam Thomson, and his partner Amy Sargeantson, who also comes from a food retail background having previously run her own bakery business.

The founders all take a hands-on role in the business, with Thomson and Sargeantson usually running the retail stores in Brisbane three days a week and spending the other four days overseeing the manufacturing in Noosa.

“My dad is still there two days a week, making sure everyone is doing the right thing,” Thomson says.

“A lot of our popular products are his recipes and for new staff, it can as long as two years to master a new recipe.”

SmartCompany caught up with Thomson to find out the best piece of business advice he has received and what he would do differently if he was starting the business all over again.

Selling fresh chocolate each day means Thomson and Sargeantson start their working day early, usually up by 5am.

“We usually visit our coffee roaster on the way to work and have a coffee there,” Thomson says.

“We do coffee in the stores and we’re quite particular about making sure the blends are right.”

From the coffee roaster it is on to visit each of the Noosa Chocolate Factory stores by around 6.30am before the doors open. Checking how their chocolate is displayed is front of mind.

“Merchandising is quite big, everything needs to be in place and we make sure the new products that are being advertised are right,” Thomson says.

Noosa Chocolate Factory produces all of its own products and has chosen not to enter the wholesale chocolate market.

“Unfortunately our products have quite low margins,” Thomson explains.

“In store we sell our chocolate for $52 a kilo but if we were to sell it via a distributor, after all the expenses are taken into account, we would have to charge $100 a kilo.

“That would just be unaffordable in Australia; it’s a tough market.”

And maintaining control over the entire supply chain has other benefits too.

“The other reason we just sell in-house is so we can really control the environment… we can look after the customer experience,” Thomson says.

There are also savings to be made when it comes to how the chocolate is packaged.

“The packaging on our products never usually costs above 2 cents [a unit] but if we went through a distributor and other retailers, we would have spent quite a bit on packaging to get noticed,” Thomson says.

“If you have a nice store fit-out you can make your products look inviting with minimal packaging.”

The afternoons are more laid back for Thomson and Sargeantson, who generally wrap up their mornings’ work at 11.30am.

It’s then time for a trip to the factory in Noosa to ensure everything is running smoothly, although Thomson says the factory is fully managed now and that means the pair don’t have to spend as much time there as they did in the past.

Thomson says the best piece of business advice he has ever received is to make sure he hired good managers who can take care of the “day-to-day stuff”.

“We visit the stores nearly daily when we are in Brisbane but you can’t really be looking after 19 staff on a personal basis,” he says.

“You need good managers in place and make their role concise and clear.”

Around 90% of Noosa Chocolate Factory’s staff have been with the business for 12 months or more, although Thomson says some staff members have recently moved on.

For Thomson, it’s part and parcel of running a small business that counts younger workers among its team.

“As a small chocolate brand, you’re not necessarily a career option for people once they’ve finished uni… but it’s nice to provide them with a job through uni and help them out.”

Thinking back to his time working part-time jobs while studying, Thomson says small businesses can have a “huge impact” on young workers who might join a business when they are 17 and then leave when they are 21

When they do get a chance to take a break, Thomson and Sargeantson love to take quick trips overseas, often choosing to catch a flight to one of their favourite destinations: Bangkok.

“We’ll take an apartment there and spend two weeks working from our laptops,” he says.

“It helps to separate yourself completely.”

In the chocolate making business, planning ahead is essential, says Thomson.

“We always plan six months ahead to order our packaging,” he says.

“A lot of our cocoa is imported from overseas so by the time you have purchased it and it has shipped, it can be six months. We’re always thinking six months ahead.”

As an importer, Thomson says there are times when Australia can feel like a “pretty lonely island” that is very expensive to ship products to.

To manage this, the business buys as much as it possible can afford each time an order is placed.

“The great thing about Christmas is that it was all planned 12 months ago,” he says.

“I learnt to do that four years ago when we had a very rushed Christmas and we ran out of packaging. We had to source locally printed bags at $1.20 each, instead of 10 cents each if we had have thought ahead.”

While some entrepreneurs opt for aggressive expansion plans to continue growing their businesses, Thomson says he and the other founders of Noosa Chocolate Factory have “decided to stay quite small” for the time being.

“We plan to open two more stores in the next six months but we’re pretty happy,” he says.

“With a little brand like ours, to expand and open more stores would require a huge investment, a large factory, more staff.”

Plus Thomson says he is wary of getting too big and the effect that would have on the Noosa Chocolate Factory brand.

“If you have too many stores, it becomes a little less special,” he says.

“We never want our products to be contract-made.”

But that doesn’t mean Thomson is resting on his laurels, revealing he draws inspiration from home grown cosmetics success story Aesop.

“I’m a huge fan of Aesop; each of their stores are really different but aligned to the environment they’re in. I’d like to be the Aesop of chocolate in a way.”

Looking to the future can also mean reflecting on the past and Thomson says there are two things he would do differently if given the chance.

“Definitely invest in really good branding in the first few months and before your open multiple stores,” he says.

“I did it all myself and looking back, it would have been a lot easier to pay someone $15,000 to get it all sorted.

“If you have multiple stores and are changing the signage and labelling, it can be very expensive.

“What a lot of successful businesses get right is getting their marketing down pat before their launch and then sticking to it for a few years before rebranding.”

Thomson’s other piece of advice to other retailers is to “always lease the best store you can afford”.

That doesn’t mean you don’t “negotiate hard”, but Thomson says nothing beats a location with high foot traffic and one that is next to other companies you’d like to align your brand to.

“I see businesses with great concepts attracted by low cost leases in quiet locations, but as a result they can struggle to get numbers through the door,” he says.

“It’s important to take into account the benefits a store with high foot traffic brings. The decision to open your businesses in a quiet area in a low cost lease could be costing thousands in potential sales a high foot traffic site may bring.”