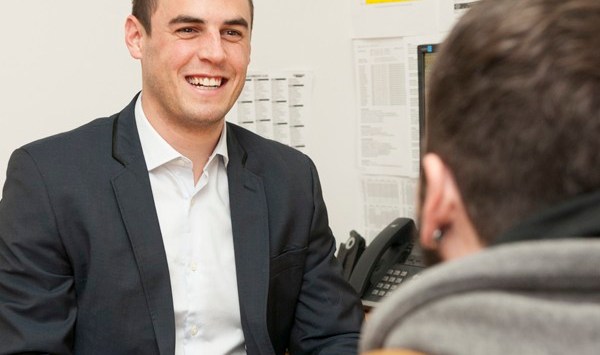 Tom Caesar and his father Mark Caesar really picked a prime time to start their business the Positive Group.

“We set up in 2009 in the middle of the Global Financial Crisis, probably the worst time to start up a finance company,” Caesar says.

After his dad was made redundant, Caesar “took a punt” and left his job to start up the business with him.

“We ended up with a massive credit card debt because we were chasing mortgages,” Caesar says.

“We were getting lots of leads but couldn’t get them approved because of the Global Financial Crisis. The banks didn’t want to lend.”

Then Caesar made a fortuitous decision, opting to put the business’s “last $1000” into Google Adwords.

Fast forward six years and the Positive Group, which comprises Positive Lending Solutions, Positive Home Loans and Positive Wealth Management, turned over $2.9 million last year and is on track to double that turnover this year.

Caesar wakes up at 6.30am and it’s straight onto his phone and on to work.

“As soon as I wake up I have half an hour on my phone when I respond to all my emails from overnight because a lot are from America or overseas,” he says.

“Then I generally get up and do some sort of exercise whether it is to go to the gym or to walk the dog.”

Ceasar says he’s “not a big breakfast person” which is something he’s trying to work on.

“I try and have a smoothie in the morning because it’s quick and easy,” he says.

Caesar then heads to the office, usually by 7.30am.

Life as a small business owner is ever changing according to Caesar.

“There’s no typical day,” he says. “There is no ‘usually’. There is always something different going on.”

“If we were just in South Australia we’d probably only have four or five staff,” Caesar says.

“Using the internet and the Salesforce systems we have in place allows our customers to get a faster approval for the loans they are after. That really comes down to customers who don’t want to have appointments and go into banks. They really want to get it done now.”

Caesar says founding a business with his dad has “had its challenges”.

“We bounce off each other and we both come up with ideas,” he says.

“The good thing is we can be honest and give honest feedback in ways where you cop it on the chin and you might walk away but it’s fine again an hour later.”

Caesar usually has a salad or sandwich for lunch but says he never eats lunch at his desk.

“That’s my number one rule,” he says.  “If I’m not with clients or business partners I’ll generally eat lunch in the staff room with my staff.”

The culture of the Positive Group is important to Caesar.

“We are pretty confident we have one of the better cultures going around in the finance industry,” he says.

“All the guys I treat them like they would be a friend not just an employee.  All of them would say that.”

Caesar says a lot of this is just about relationships and treating people the right way.

“Not necessarily as a boss but more as a coach,” he says.

The Positive Group also tries to put on team events every two or three months to build morale.

“I take them out for lunch or dinner altogether with an open bar just to let people network and get to know each other outside the office,” he says.

Caesar tries to leave the office fairly early but is back online in the evenings when he finds he can get a lot of work done without interruptions.

“I still play football. I train twice a week and play on a Saturday during winter,” he says.

“That’s something I will do until I can’t walk anymore because it is an outlet. That and a bodyboard during summer are the two things you can actually do and you’re not thinking about work at all the whole time you are doing it.”

When he does eventually head to bed Caesar doesn’t have an easy night’s sleep admitting that he often wakes up thinking about the business.

“Everyone says you shouldn’t watch TV before bed but I spend half an hour before bed when I watch TV just to relax,” he says.

“But I have nights where I come up with something at 2am in the morning and it’s almost been a subconscious thought that I write down. If I don’t write it down I won’t get back to sleep. The work mind is always going at nighttime.”

Caesar says running your own business is not work, it’s a lifestyle.

Caesar says even if he’s out for dinner he is busy telling people what the Positive Group is about and what he does.

“It’s just hard work at the end of the day and accepting that you are not going to sleep easily at night. “

“We’ve just about finished a portal that we are going to label for car dealers and mortgage brokers that can’t do asset finance,” Caesar says.

The brokers can submit loan applications to the Positive Group’s sales support team and it will process to the right lender.

“We think that’s going to be a big hit over the next six months,” he says.

Caesar is also planning a big focus around growing the financial planning and home loans parts of the business even further.

“We’ve got another business kicking off next year where we’ve stocked a warehouse in Adelaide with cars and have bought some domains around used car sales so we can actually sell to customers direct on social media. We think we’ve found a real niche in it.”

Last on the cards is the launch “in a few weeks” of comparison site loancalculator.com.au.

“We are trying to give people a true comparison on the loans there are comparing all the fees and charges and being able to apply for them on the website,” Caesar says.