Jim’s Interview: How the man behind the mower built a $500 million business

Looking back on his storied 40 years in business, David Penman reflects the most striking thing that springs to mind are the number of “dumb things” he did.

The 66-year-old is probably better known to Australians as ‘Jim’, the man behind the wildly successful and multi-pronged Jim’s Group franchise, which today includes Jim’s Roller Doors, Jim’s Personal Training, and — of course — Jim’s Mowing.

Penman speaks to SmartCompany in the wake of his recent biography release (appropriately titled Jim’s Book), which provides a “warts and all” overview of the iconic businessman’s life and business journey, including the fact that Jim’s Mowing was started from a mere $24 investment in 1982.

However, Penman reveals the rags to riches story of the $24 dollar start isn’t all it’s cracked up to be, saying it was his own incompetence that led him to be in that position in the first place.

“When you’re talking about the $24 start, it’s more about my stupidity to be in that position in the first place. I was a long way ahead earlier on, I had a good start at university and I bought my own house,” he says.

“But I got very lazy and arrogant, I didn’t want to work hard and I blew it all and ended up in a really bad situation, which shouldn’t have happened in the first place.”

“I’ve had so many significant crises over the years. When I look back on it all I think: ‘How on earth could I have ever succeeded in anything?’”

Surprisingly, this is exactly the message Penman wants readers of Jim’s Book to receive, hoping those who read it think: “If this idiot can do it, I can do it.”

Despite not agreeing with everything author Catherine Moolenschot writes in the book, he believes it conveys that message quite well and shows that despite his own shortcomings, the things he did right from the beginning with Jim’s Mowing overcame all the “ridiculous mistakes” he made.

“The book paints a fairly vivid portrait of someone who is pretty flawed, with poor personal skills, and who makes some rash silly decisions, but still manages to succeed,” he says.

Penman is a refreshing change from many other prominent Australian business leaders, especially those who run half-a-billion-dollar companies. He’s honest, direct, and completely willing to talk bluntly about his own failures, what drives him, and what he sees as the biggest faults businesspeople can have.

Since starting Jim’s Mowing nearly 40 years ago, Penman says he’s always been “thematically devoted” to his customers and views poor service to customers or franchisees as almost a personal offense.

“It gets me very emotional, it’s not really a rational reaction,” he says.

“Those who succeed have that emotional driver. They’re not after the money, it’s the service that really drives them.”

On the converse of this, arrogance is one of the worst traits you can display in business, says Penman, with the founder having no time for people who “think they know everything”.

“We never know everything, we’re never good enough. You have to have a sense of humility, people who fail in business aren’t the ones who are stupid or lacking in education, it’s the ones who are too stubborn to say they’ve made a mistake,” he says.

Penman speaks from experience here, noting the numerous mistakes and lessons he learnt — big and small — in the early days of Jim’s Mowing, saying he didn’t become a millionaire overnight

In fact, one thing he says was key to his business career came from a lesson he learnt by being humble, and from admitting he didn’t know how to do something. 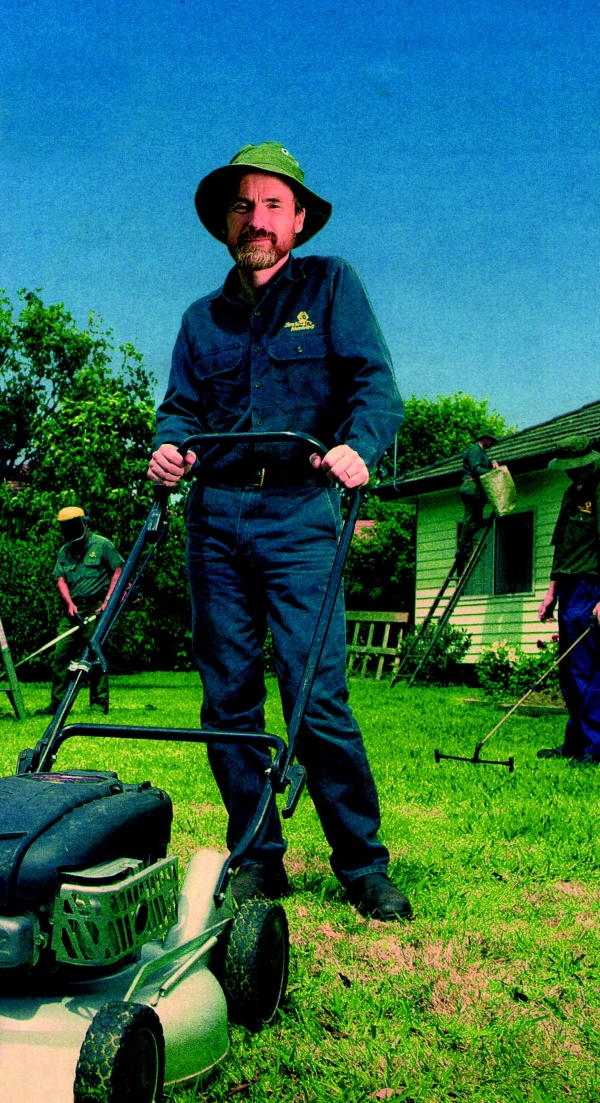 “I wanted to sell my lawn mowing round, but I was very bad at it, I’m not a salesperson so I went to see someone about advertising,” he says.

“But instead of talking about his company, he started talking about how I could run my business better and gave me his advice. And when he finished talking, I knew I would use him for advertising, even though he never told me a thing about his business the only thing he was concerned with was my success.”

“So I’ve used that same approach. When I’m helping people, instead of talking about running my business, I focused on their success, and that’s how I became a super salesman.”

Jim’s Mowing and the associated plethora of Jim’s businesses are deeply ingrained in the Australian psyche, their vans an iconic regularity on suburban streets. The company’s famous logo, featuring a smiling Penman in a bucket hat, has even been given the meme treatment via Twitter and a popular Facebook page called ‘Jim’s Lobbying’.

Penman never thought the business would reach such levels of popularity, and recalls being asked by a friend early on how many franchisees he’d like to have.

“I had no idea if it would work at that point, but if it did I thought I might have around 100 franchisees,” he says.

Today, Jim’s Group has nearly 4,000 franchisees and 300 franchisors, and the business is still growing, receiving over 180,000 leads each year it can’t facilitate.

Being a franchised business, Penman has shared his $500 million revenue with his franchisees and franchisors. But the businessman is no devoted fan of the franchising business model, noting the industry is rife with issues in Australia.

Speaking to SmartCompany prior to the government’s release of the franchising inquiry report, Penman labels the franchising code as largely “garbage”, saying it doesn’t do enough to protect franchisees, nor make it easy for an aspiring business owner to become a franchisee.

“I’m irate about the fact the franchising code doesn’t do anything to protect potential franchisees. Disclosure documents are arcane and archaic, and you have to be experienced franchising lawyer to understand them,” he says.

“Even then, the lawyers can only tell you what the contract’s like, not what the franchisor is like.”

“Ripping off the little guy”

Penman says there are a number of “really bad” franchisors around, and is pushing for a mandatory yearly anonymous survey of franchisees to evaluate franchisors, saying Jim’s Group does this internally every year. He also admits readily that his own company’s franchisors are not without their own shortcomings.

“Even with Jim’s, we’ve got nearly 300 franchisors. Most are pretty good, some are brilliant, and some I would not buy,” he says.

“Don’t take anything for granted. Investigate, do your homework. List all the franchisees by a particular franchisor and ring them all. If you’re not willing to spend a few hours to do your homework, then put your money back into the bank.”

Since then, the franchising inquiry has recommended a number of changes to better protect potential franchisees, along with calling for a full investigation into Retail Food Group. Penman says the alleged actions of Retail Food Group are “sin”.

“What they’ve done to their franchisees in some situations is awful, it’s just more wealthy powerful people ripping off the little guy,” he says.

Jim’s Group has a number of protections in place for its franchisees, including a system which allows them to vote out their franchisor, and allowing franchisees to change their franchisor whenever they like (which he notes is not that uncommon).

Even with these protections in place, Jim’s Group hasn’t been without its share of issues, though Penman proudly notes he’s only been to court three times in the history of the business.

I just think people deserve good protection. Even with our system and all the controls, we have had bad things gone on, and several franchisors who don’t do a good job,” he says.

“So I can’t imagine what goes on in other systems, it’s very upsetting.”