Liquid State got some of the best minds in Australian business to advise it for free: here’s how and why 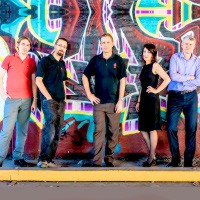 What do you do when you’re a fledgling Brisbane tech start-up, touting a product with the potential to wrong-foot all the big players in your industry?

If you build slowly and steadily – growing your business and refining your product as your customer base grows – you could lose the early lead you had.

That was the challenge facing Liquid State, a digital publishing company launched in Brisbane in late 2010. It makes software that allows businesses to easily and quickly publish documents in a format that’s built for iPad.

The leader in the business publishing space is Adobe. But when publishing a document for iPad using its tools, the end result can be clunky. The dimensions are wrong.

That’s where Liquid State came in.

Philip Andrews, Liquid State co-founder and CEO, says he and his co-founder Cyril Doussin knew there was a worldwide gap in the market for a product that allowed businesses to leave PDFs behind.

“The businesses we had built before had always started small, built organically, gone regional then national,” Andrews tells SmartCompany. “We’d bankrolled that process, which is fairly typical in the publishing business.

“But with Liquid State, because of the potential for the technology and the size of the market, as well as the size of the competition, we wanted to have an international profile very quickly.”

How can a business go from zero to being competitive with Adobe? By bringing on the best advice.

Shortly after formation, Liquid State formed an advisory board, and invited experienced business advisers to join it. They came on a pro-bono basis, with the understanding that they would have a stake in Liquid State’s success.

Dylan Byrne, an accountant and consultant at BDO, was one of the first to join.

He’s not getting paid for his help. But he tells SmartCompany he didn’t hesitate for a second.

“There’s a huge amount of personal satisfaction as an advisor in helping guys like that achieve their goals,” he says.

“I enjoy doing the financial thing, but the relationship side of things is the most satisfying part of my job.”

Joining Byrne on Liquid State’s advisory board are several businesspeople with specific expertise, including a lawyer, a leading corporate director, and a marketing guru.

They’re a calibre of person Andrews says Liquid State couldn’t afford to hire right now. But having them around has made the way ahead much easier.

Liquid State recently scored a $785,000 Commercialisation Australia grant to develop their product. Andrews says they couldn’t have done it without their advisory board.

“Companies like ours are often nimble and lightweight – and that’s what they try to be. When you’re dealing with larger businesses and agencies that can cause friction. You need really good advisers to get past that.”

To get the grant, Liquid State needed complex accounting structures in place. Most start-ups would say that kind of structure is far beyond their capabilities. But Liquid State didn’t.