In fact, if you had asked the brothers and now co-founders what they’d be doing in five years back in 2015, the once-upon-a-time dentistry students would have conjured up visions of root canals.

Perhaps that’s a parallel universe, because MAISON de SABRÉ, the eponymous personalised leather brand the pair created in 2017, is just as atypical as its founders.

At a time when even the most hyped personalised e-commerce businesses have been falling over and the retail sector is suffering through its biggest slump since the 1990s, the Sabré brothers have managed to create a multi-million dollar business in just a few years.

With more than 100,000 customers worldwide in 2019, the online-only retailer hit $10 million in revenue in its second year, with year-on-year average growth over 500%.

That’s all from the straps on their boots, in case you were wondering.

Selling a range of monogrammed accessories, including clutches and zip wallets, the Sabrés have carved out a niche with young shoppers around the world looking to showcase their personalities.

From dentistry to luxury retail

The MAISON de SABRÉ journey hasn’t been without adversity: the business was born from vision produced by necessity.

Born in New Zealand, Omar and Zane are both qualified dentists, with the latter admitted to study at Griffith University on the Gold Coast, fronting up $30,000 a semester for the privilege as a non-citizen.

But several years into his degree, an illness in the family sidelined Zane’s plans, suddenly pulling his financial support out from under him.

“We were in a position where we either pay for it ourselves, or just forget it,” Zane tells SmartCompany.

“I was in my fourth year of studying, it was too far in to just let go of everything.”

Left with few options, the brothers turned to their entrepreneurial bent and MAISON de SABRÉ was launched from nothing more than some creative vision and oodles of hard work.

Omar was working full time as a dentist while Zane was studying, but both made time to work on the fledgling company.

“It was probably the most hectic year of our lives,” Omar says, thinking back to 2018 when he was working as a dentist during the day, before coming home and building the business until 2am.

The grind paid off. Today, after building a sizeable business in Australia, MAISON de SABRÉ is charting out a global expansion, hoping to take a bite out of markets as far flung as North America and Asia in the coming years.

“We want to be the biggest personalised leather company in the world by 2024,” Omar says.

It’s a lofty goal, but so was creating a multi-million dollar retail business out of dentistry school.

Several factors have underpinned the Sabré brothers’ success so far, not least of which was their ability to leverage Instagram at a time when the platform was exploding for retailers trying to build new brands.

Underneath, the brothers credit the brand’s traction to the appeal of a young brand, built by two millennials with an eye for designing products they themselves want to buy.

“It’s still that younger generation that really aligns with who we are,” Omar says.

“Our consumers have not changed, but our target market has kind of matured with us.” 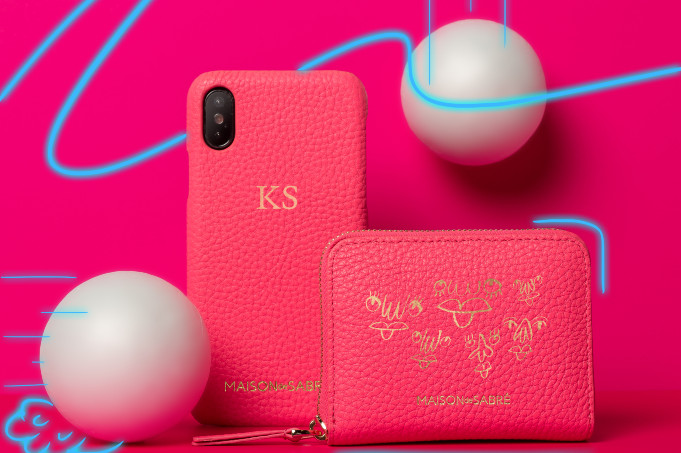 From selling phone cases to clutches, card holders and zip wallets, honing in on demand for personalisation has made more than one entrepreneur their fortune in recent years, but the segment hasn’t been without its failures, including once-upon-a-time market darling Shoes of Prey.

The Sabré brothers say they’re not getting ahead of themselves and intend to learn from the failures of others in the space, particularly around company culture and operations.

“The key takeaways we’ve seen from a lot of business failures is that it’s not so much about the product, it’s more around management and how the team is operating,” Omar says.

The brothers now have 25 employees and have worked hard to foster what they call an “owner’s mentality” in the business, encouraging their team to own successes, and failures.

“Everyone is responsible for growth,” Omar says.

The key to their strategy, Omar says, is “go global, but stay local”.

MAISON de SABRÉ ships products to 131 countries, but is run out of an office in Brisbane; the brothers want to maintain a stable Australian business while searching for scale in larger markets around the world.

“Over the next 12 months we’re looking at reinforcing our international growth and securing more regions in North America,” Zane says.

North America is an attractive market for any growing business, with a massive population and an economy that rebounds like nowhere else, while in Asia, Japan has been earmarked for growth.

China is a larger market, but much more risky.

“In terms of expectations, we’re better aligned in a way that can support our customers in Japan,” Omar says.

But that doesn’t mean plans won’t change; the brothers say they don’t plan more than six-to-twelve months ahead in the dynamic world of international e-commerce, so everything could change by this time next year.