A fondness for “immature” markets: DriveMyCar’s Chris Noone on why he’s comfortable with the unknown 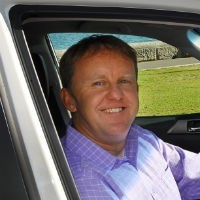 Recognising the value in peer-to-peer marketplaces and the true nature of the sharing economy is something Collaborate Corporation chief executive Chris Noone is passionate about.

Noone, who came on board with the company only last year, has in a short period of time overseen some of the ASX-listed company’s biggest growth and changes.

Collaborate Corporation, which used to be known as QANDA Technologies until Noone changed the name in November last year, now operates three peer-to-peer marketplaces: DriveMyCar, Rentoid and MyCaravan.

Noone says other changes took place as soon as he took over the parent company in August 2014.

“This is when the company started to transition away from being a software company to one operating in the peer-to-peer space,” he says.

Noone launched MyCaravan in November last year and also launched PeerPass, a “trust and reputation” platform that verifies people before they participate in peer-to-peer transactions.

The largest of Collaborate Corporation’s businesses, DriveMyCar, was founded in 2010 and is based on the idea of unlocking Australia’s under-utilised cars and making them available to rent.

DriveMyCar has enjoyed sustained growth in recent times, with its consumer rental transaction value in July 2015 increasing by 26% month-on-month. In the 2014-15 financial year, DriveMyCar’s private car rental turnover was more than $1 million.

Most recently, Noone lead the August launch of DriveMyCar: Business, a corporate peer-to-peer service for businesses wanting to access rental vehicles, which was driven by the rapid growth in the number of vehicles the company has available for rent nationwide.

As well as privately owned vehicles, DriveMyCar also utilises a fleet of vehicles provided by InterLeasing, one of Australia’s largest vehicle leasing firms.

“We have more than 400 vehicles located all over Australia, more than 14,000 registered users and have paid out more than $4.5 million to vehicle owners,” Noone says.

Noone is no stranger to disruptive technology, having spent the past 15 years or so in the digital space, particularly mobile.

Noone was previously involved in a mobile content port La Vizzavi in 2001- a European joint venture between Vivendi and Vodafone that was the forerunner of Vodafone’s Live service.

In 2006 he launched NineMSN’s mobile group and grew its advertising business to take a 17% market share.

Noone even founded an education campaign aimed at demystifying mobile content services at the time in 2008 called ‘You Can On A Mobile’.

And prior to Collaborate, Noone founded Nitro Media, the largest provider of mobile games and apps to the Australian telcos.

Noone says one big difference from his current role is the security of knowing Collaborate Corporation is a publicly listed company.

Apart from that, Noone says his latest venture has really been an extension of his fondness for disruptive and “immature” markets.

“It’s a space I feel particularly comfortable in, a place where you have to take educated risks every day,” he says.

“There’s a lot of opportunity to make decisions, to get them right and reap the benefits.

“The downside is getting a few of them wrong but it’s worth it when you get it right,” Noone adds.

Noone says his biggest deal since coming on board with Collaborate is the partnership with InterLeasing, one of the largest leasing companies in Australia.

“We secured a large corporate supply of vehicles for our fleet; it was one of the first deals where a company participated in peer-to-peer opportunities,” he says.

“We think there’s a big future in taking peer-to-peer from being person-to-person to business-to-business.”

Noone is an early riser and says the ideal morning involves him getting up at 5.50am to head down to Manly beach for 1.5km ocean swim to Shelly Beach and back.

He’s usually done by about 7.00am, and then it’s time for “a quick hot chocolate to warm up” and back home by 7.30am to get ready for work.

Noone either jumps on the bus to work in Potts Point, which is about 16km away, or rides his bike.

“I usually pick up a fruit salad and yoghurt on the way into work,” he says.

Noone’s days start off with “quite a lot” of emails from brokers, investors and clients and with a lot of these in different time zones, they never really stop, he says.

Then it’s time to “really plan out the day”.

“It’s a pretty essential because of the business, it’s really important to segment where I’m spending my time during the day,” Noone says.

Noone says he tries to balance his time between operational, strategic and developmental activities and a big part of his daily life is focused on using technology “intelligently” to make things more efficient.

“It’s also really important for the business to focus on constantly improving our peer-to-peer technology,” he says.

“(The motto is) develop once, use many times … we can leverage our technology throughout multiple businesses and it allows us to scale much more quickly.”

Noone says he also spends one day a week in Melbourne meeting with lawyers, investors and working on corporate and government deals for the business.

“Increasingly we’re having a lot more interaction with the government, they are becoming more interested in the sharing economy and how it can grow the economy,” he says.

Noone’s leisure time involves being by the water as much as possible.

“If it’s a good weekend, I’ll be down at the beach living the sharing economy philosophy,” he says.

By this Noone is referring to racing “other people’s yachts”, which he cites as a frequent pastime.

“I don’t feel it’s necessary to own my own yacht,” he says.

Noone firmly believes his future is intertwined with that of Collaborate Corporation and disruptive industries.

“The peer-to-peer market is still in its infancy, there are still a lot more categories ripe for disruption,” he says.

“We’re looking forward to taking our technology and our understanding of peer-to-peer into those different categories.

“I’m very focused on taking the existing business into the mass market.”

And Noone is confident he will achieve this goal.