“We’re better than all of them”: How Melbourne headphones startup nura is planning to be as big as Bose 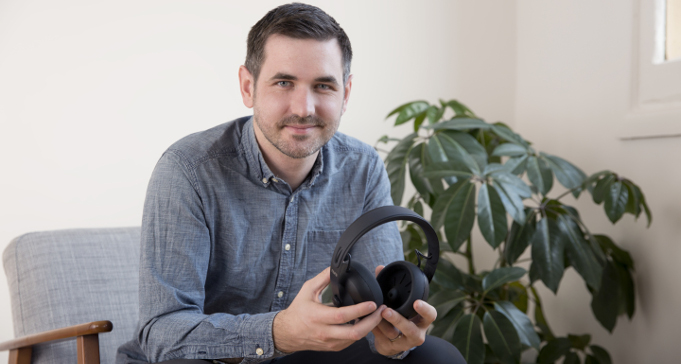 Above a busy street in Melbourne’s north is the headquarters of a three-year-old Aussie headphones company that, if all goes according to plan, will be as big as Bose or Sony in just a few years.

While comparing a 30-person company to a $5 billion behemoth might sound like classic startup hyperbole, the startup, nura, is the pioneer of a new and disruptive space in the headphones and audio market — with the goal of revolutionising how people everywhere listen to music.

Nura’s bright new tech is that of personalised sound, which aims to offer more than the usual listening experiences provided by everyday headphones and delve into what makes each person’s ears unique. Rather than hearing a song through the typical ‘flat’ profiles, users are treated to a carefully crafted and equalised profile, with the highs and lows all tuned to the exact level their ears will best receive them.

If it sounds all too good to be true, it’s not. Sitting in the nura offices in Brunswick, I was treated to a demonstration of nura’s pioneering (and only) product: the ‘nuraphone’.

Putting on a pair of nuraphones reveals the first point of difference to your standard pair of headphones, as nestled within each ear cup is an in-ear bud similar to what you’d find in a standard pair of earbuds. The buds reach into your ears and provides the highs, while the outer ear cups wrap around your ears to provide the lows and — most importantly — the bass. 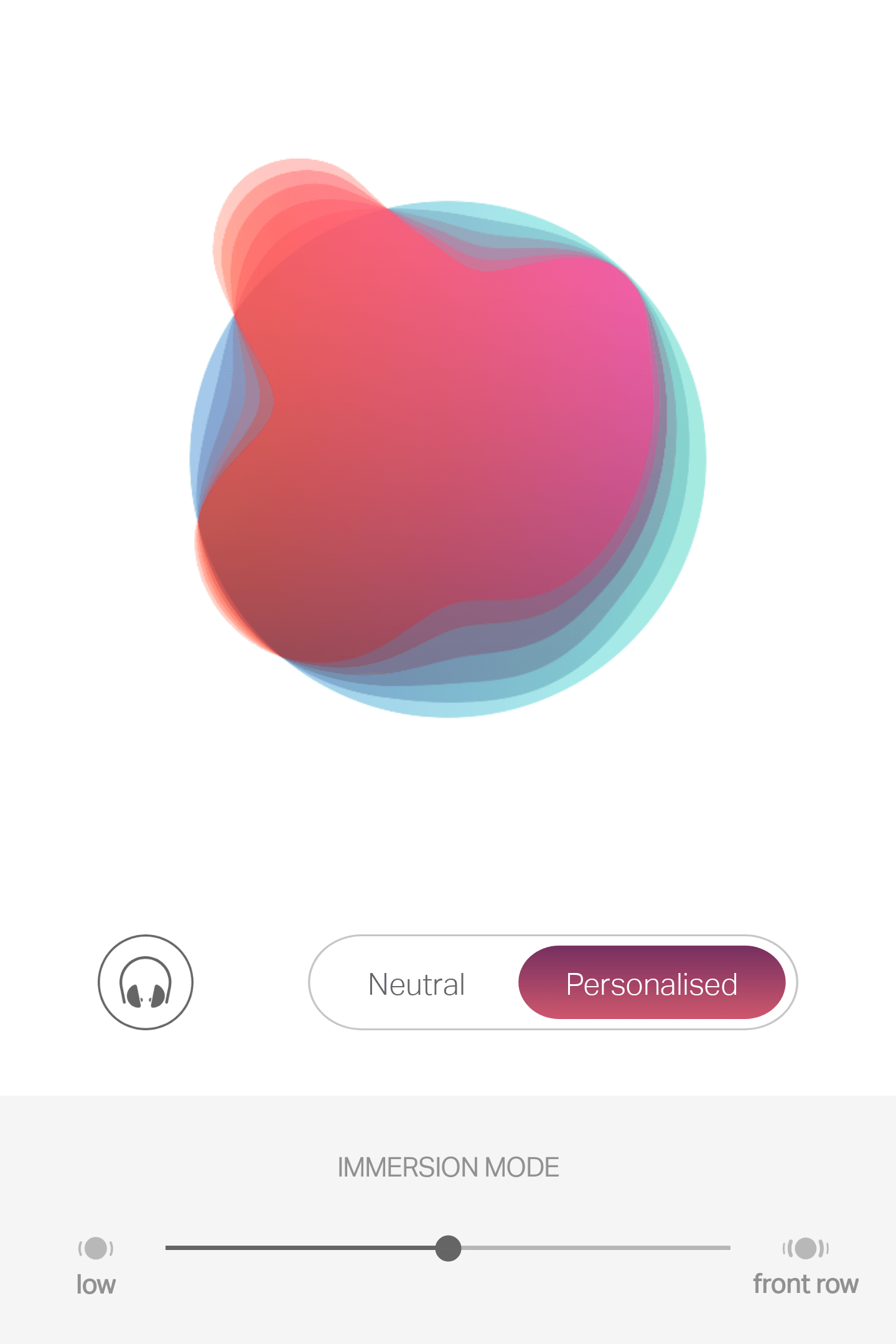 The app then plays you a demo: a spacey techno song first on a flat profile, and then with your personal profile switched on. You notice the difference immediately, and it’s seriously impressive. It feels like the song’s full range and depth are suddenly unlocked, though I suspect the demo song itself is carefully chosen just for this reason.

Prior to arriving at nura’s headquarters, I was asked to pick my favourite song to play through the headphones to get a sense of just how stark the difference is. Already suitably impressed with the demo, I scrolled far past my top tunes on Spotify, settling for something further down the list, lest I ruin the sound of the song through all other headphones for the rest of my life.

Just like the demo, my chosen song was markedly different through the nuraphones. Never has We Like To Party by the Vengaboys ever sounded so good.

“Five percent of people cry on their first listen”

After my demonstration, nura co-founder Luke Campbell explained to me how the headphones function, showing me the tiny microphones at the end of the inner earbuds that detect the ear’s otoacoustic emissions — tiny signals created by the inner ear (cochlea), which the microphone picks up, processes, and turns into each user’s unique hearing profile.

Soft-spoken, and a medical doctor by trade, Campbell is a refreshing change from many startup founders; he’s clearly fuelled by a love for his product and its complex science rather than any of the usual glory associated with startups. He started the company back in 2015 alongside Dragan Petrovic and Kyle Slater, who has since left the business.

Before nura, headphone companies would use rubber heads to help tune their headphones, with Campbell saying it was possible to get a perfectly flat frequency response on a rubber head that was “somewhat” statistically average.

But what he and his co-founders realised was that no-one equals the average.

The founders’ believed headphones tuned to a rubber head would never convey all the information contained within a piece of music. So, supported by $20,000 in seed funding from the Melbourne Accelerator Program, they began to cook up some prototypes.

Although they approached the product with a firm physics and biology lens, after running the initial demos, Campbell says the team realised they were onto much more than a neat piece of tech.

“What we were seeing is that we were really letting people connect to the music in an emotionally deep way,” he says.

“We’ve demoed this for thousands of people, and maybe 5% of people cry on their first listen. Seeing people react like that, and how people appreciated that, really drove us to push the idea forward.” 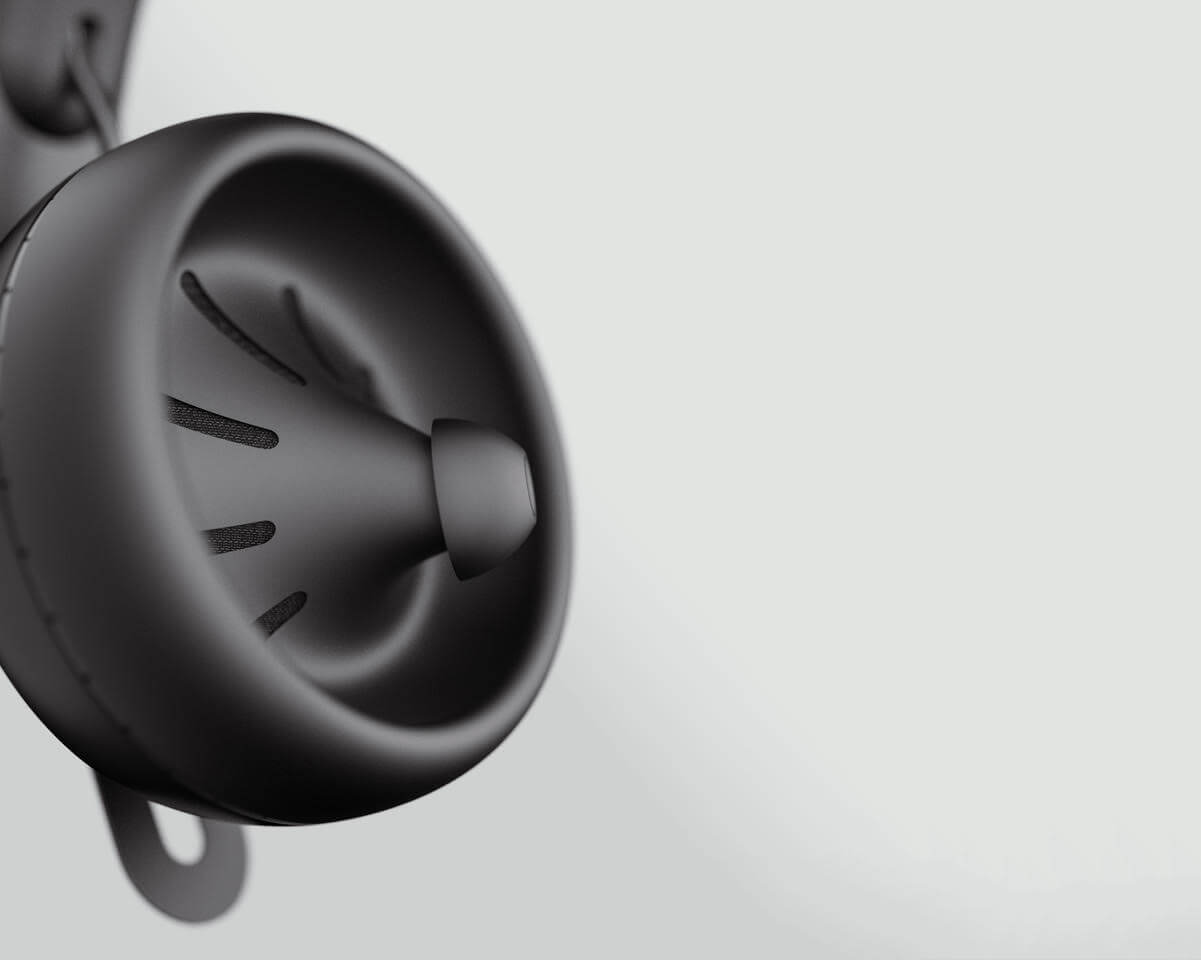 The insides of the nuraphone.

A $2.5 million Kickstarter and running out of money

It was early 2016, and the team of three were armed with a concept, a prototype, and a tonne of positive reception. The only thing lacking was money.

The original funding for the nuraphone had come from the aforementioned Melbourne Accelerator Program and the Hax Accelerator, but there was only a few tens of thousands — nothing like the money needed to mass produce a consumer-ready piece of high-end audio tech.

Struggling to get seed funding without a proven product-market fit, the team set about making Australian crowdfunding history instead. They raising the highest ever amount on for an Aussie Kickstarter project in mid-2016  — $US1.8 million ($2.5 million) from nearly 8,000 backers.

“A lot of people told us ‘don’t bother, not enough people care about quality sound. They just want headphones for fashion and noise cancelling, not just for good audio’,” Campbell says.

“We didn’t believe that — we thought we were onto something. The number of people that backed us on Kickstarter showed there were people out there who agreed.”

It was a big moment for the nura team, and the completed Kickstarter campaign landed the team a lot of press and hype around the product. But behind the scenes, the three founders were concerned.

They didn’t have enough money.

“People don’t realise,” says Campbell “that even with $2.5 million dollars we still had to complete the development of the product, pay everyone’s wages and manufacture the first 10,000 headphones.”

“That’s not enough money to do that, not by a long shot.”

“People don’t realise,” says Campbell “that even with $2.5 million dollars we still had to complete the development of the product, pay everyone’s wages, and manufacture the first 10,000 headphones.” “That’s not enough money to do that, not by a long shot.”

It wasn’t the founders fault. At the time of their Kickstarter, they believed the amount they were charging for each nuraphone would suffice, and if they had gone through with what was initially promised, $2.5 million probably would have cut it.

But that would have meant headphones with no wireless capability, no noise cancelling and lower quality components all round. Not wanting to skimp on quality, the three founders went searching for funding and found it in the form of a $6 million series A round led by Aussie investing powerhouse Blackbird Ventures.

Having the thousands of backers as proven product-market fit and demand, the process of finding the additional wasn’t “too bad”, says Campbell.

“After seeing the Kickstarter community behind the nuraphones, they were very on board,” he says.

The company shipped the last of its Kickstarter headphones in January this year after almost two years of development. But that was just the beginning.

Asked if the company has ever had times where it struggled to keep up with demand, a slightly tired-looking Campbell laughed and said those times were ongoing.

“That point is continuous, it never actually quite finished,” he says.

After the Kickstarter models shipped, the reviews from customers and journalists started to roll in. Four stars from Wired, TechRadar and PCWorld, along with videos upon videos of YouTubers calling the product “the perfect headphones”.

True to his subdued form, Campbell says the team were “pleasantly surprised” by the demand, which began to shoot through the roof. They hired rapidly, growing from fewer than 10 staff to more than 30, with boots on the ground in four different countries.

Today, around 86,000 people have made hearing profiles through the nura app. While many people create profiles more than once, it’s safe to say the company has likely sold well over 50,000 units.

The joys of a hardware startup

The nura team have just rolled out the nuraphones’ ‘G2’ update, which introduced new features to the devices, such as noise cancelling, offline mode, and a ‘social’ mode that allows uses to hear their surroundings while the headphones are on.

These features weren’t available in the release headphones, and Campbell says the team intentionally made the nuraphones’ tech highly adaptive, effectively allowing them to make hardware-level changes through just software updates.

Introducing the capability to do this was just one of the many challenges the team have faced while running a local hardware startup, given there’s “not a great deal” of experience in the Australian ecosystem for startups wanting to make physical tech, according to Campbell.

“In the end we did find some connections through the Hax accelerator and via our VC partners. It’s definitely been important to learn how other people have done it,” he says.

“Some of the unique challenges are ones you simply cannot change, like after you’ve made the hardware you can’t easily fix it with a patch. If the headband force is wrong, it’s wrong.

“That means you have to make all your decisions and get things right the first time, which usually means getting them right a year before the product’s sold.” 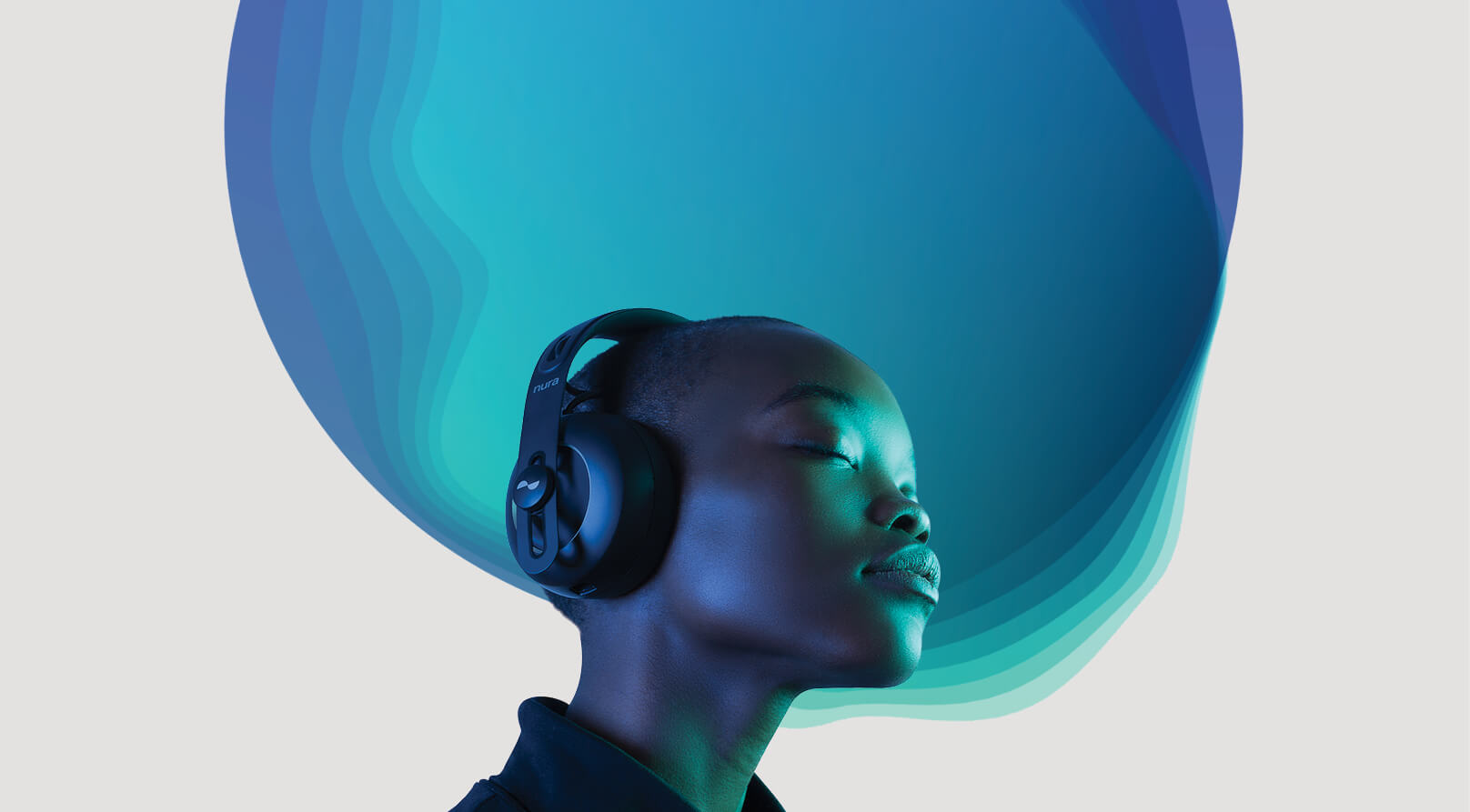 On the flip side, Campbell says there’s something uniquely rewarding about being able to hold his product in his hands, and stand at the end of the production line and watch them being stacked up — let alone seeing someone wearing them “in the wild”, as he puts it.

“We’re better than all of them”

Looking to the future, Campbell says the priorities for him and his team revolve around continuing to improve the nuraphones’ hardware and software through future firmware updates.

He also is keen to dive deeper into some of the hearing science behind the tech, saying nura is aiming to build a “world-leading” understanding of the space.

The founder also quickly mentions that new products are in the works, but remains tight-lipped on exactly what and when they might be released. A similar ‘no comment’ is given to questions around further funding rounds, with Campbell saying “you can probably guess what that means”.

“For really long-term stuff, we want to be up there with companies like Bose and Sony in much less than ten years,” he says.

“We think the concept of personalised sound is huge, and we think the techniques we use to do it are unrivalled.

“When we started our Kickstarter, there were zero companies doing personalised sound. Now there’s at least ten, and we’re better than all of them.”

NOW READ: How we did it: Eight entrepreneurs on the emotional rollercoaster of crowdfunding