Mobile millions: How Cafe2U is growing in leaps and bounds under Derek Black’s guidance 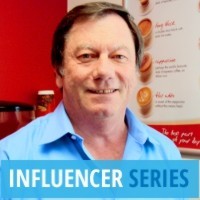 Derek Black knows franchising. The 62-year-old Sydneysider has owned his own franchises, developed and then sold a multi-site franchise business, and is now the managing director of the world’s largest mobile coffee franchise, Cafe2U.

Since starting out as a single coffee van in Sydney in 2000, Cafe2U has grown to 230 franchises in Australia, New Zealand, the United Kingdom, United States and South Africa. The company was recently acquired by Retail Food Group and turns over more than $48 million annually.

Cafe2U started in 2000 by on Sydney’s Northern Beaches as a single mobile coffee business.

In 2004, the business was sold to an the owner and operator of roasting company Belaroma Coffee, Andy Simpkin, who together with one of his employees Alan Biddle, transformed what was a licensed business into a franchise organisation.

I joined Cafe2U in 2008 and I worked with the rest of the team to develop the business to its current state.

My background is in convenience retail in service stations with Shell. I created a multi-site franchise system with Shell in Queensland and later in NSW. The business was sold to Coles Myer, which was later sold to Wesfarmers.

I had franchises with Shell for 25 years so convenience retail was always my focus.

I’ve had franchises with Shell, Hungry Jacks, KFC and Australia Post and I had them all at the same time. I’ve seen very different ways of franchisors dealing with people.

To run a successful franchise network the franchise agreement must be fair and applied fairly. There must be a system which is clearly identifiable to franchisees.

As a franchise partner you must be open and honest and act in a caring matter. It has to be a mutually beneficial relationship. If it is one-sided either way, it won’t work. It builds a degree of distrust.

If you searched online for bad things being said about Cafe2U it would be hard to find anything. The reason for that is we have focused on ensuring we provide a focused service to our franchisees.

A whole range of people sign on to be Cafe2U franchisees. We’re seeing greater interest from female operators, who now make up 40% of our franchisees. I think it is because Cafe2U is a mobile business and you are required to go out to people, female franchisees tend to have more successful franchises. They listen to what the customers say.

Being a Cafe2U franchisee is a lifestyle choice. They are choosing to work long hours or short hours depending on their lifestyle. Many of them are looking to make a big career change, they are in their mid-40s or early 50s and they want to take control of their lives.

We provide franchisees with a system of exclusive territory, which is mapped out using science.

This business is about relationships. It’s not big B2C, it’s little B2C. Each franchisee has a territory with around 100-150 customers they see on a regular basis. Facebook is an excellent marketing tool for that.

We spend the first two weeks with new franchisees and get them to a sustainable level in two weeks. From then, they must keep that trust with customers.

We’ve launched new businesses in competition with five or six other brands and we’ve managed to build a strong business in two weeks.

Our franchises must achieve a level of profit within the two weeks and we’ve never failed to achieve that. We guarantee them a target amount of money and if the business doesn’t achieve that, we will write them a cheque for the difference.

It gives our franchisees confidence. They can go home to their partner and say “here’s the baseline but we can make more money than this”.

A business plan is very important. Without a plan you don’t know where you’re going. If you fail to plan, you plan to fail.

We create a business plan with each new franchise partner and we walk them through it. We endeavour to contact each franchisee once a week, and once a quarter we are on board their vehicle with them. We also hold regional meetings once a quarter where we tell franchisees about new initiatives. It gives them the opportunity to network.

The best marketing activity we can do is sampling. We don’t discount our product.

We strongly believe we have a very high quality coffee blend and so we are competing in the cup with competitors.

In Melbourne you can have three or four really good coffee shops side by side and they will all be full.

Being part of a larger organisation such as Retail Food Group will provide more opportunities for our franchise partners.  Supply chain economics will be enhanced by the ownership of a larger organisation, which because of its scale, can provide additional expertise. For example, they have a full IT department, compared to the 15 people at Cafe2U.

The coffee market is very competitive. But it is a very good business to be in. People enjoy it.

Are we at the market’s peak or saturation? I don’t think so. I believe what I’m seeing is a shift from instant coffee to espresso coffee, a lot of which is driven by the capsule market.

You cannot give away bad coffee.