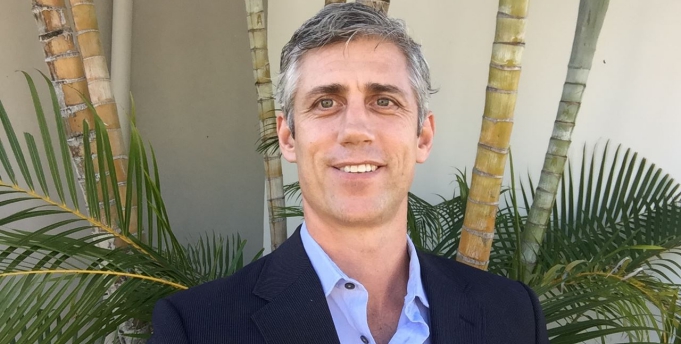 Coming from the world of corporate management, Tim McNamara always planned to run his own business, but wasn’t quite sure what form it would take. With smart devices becoming more and more prevalent, he identified a problem that needed solving and set out to establish powerbank vending machine company Powerpod back in 2012.

Four years later, Powerpod had annual revenue of $2.1 million and a three-year growth rate of 114.8%, landing it the number 31 position in SmartCompany‘s 2016 Smart50 Awards.

McNamara proved it’s possible to sell high-end products through a vending machine and set his sights on focusing his business on the technology aspect of automated retail, with the eventual goal of transforming Powerpod beyond retailing and into a technology and services company.

McNamara spoke to SmartCompany about the future of the automated retail space, as well as the difficulties of being a “one man band” when starting your own business.

I started Powerpod in late 2012, but the business didn’t exist in its current form until early 2013.

I saw a problem that needed to be solved, and I saw that others needed that problem to be solved. Everyone was running out of phone battery, and though there were a few charging stations here and there, there wasn’t a real solution.

My ideal solution was to have a battery pack handy whenever I was low on battery, so I researched it and saw there were packs you could get, but they weren’t in the places they were needed. Also, the products weren’t very good — either big bricks from JB Hi-Fi or plastic things you bought from the internet.

So I put together a quality product, and I got it to where people needed it the most. One of the early challenges was actually educating customers on what powerbanks were.

My background is in the corporate space. I was with NAB for five years in management there, and I spent a bit of time working at Telstra.

I had no prior experience in running my own business, but it was always the plan. I saw my work in the corporate space as an opportunity to develop the capability and skills to maximise the chances of success when it came to starting my business.

Powerpod hit $2 million in turnover in our second full year, and since then we’ve grown around 20% each year.

Now we’ve actually taken the foot off the pedal and put more focus on trying to build the business. We’re quite profitable now so we’re investing in getting the right people and focusing on building our own software system.

One of the problems I found with automated retail is that there’s no good software in place. So we decided to build our own.

We wanted to build a system that gives us the flexibility to move in other directions, and eventually becomes the core of our business.

As a business, our vision is more as a technology and services provider in automated retail, and part of that is leveraging our unique experience and position in Australia. We’re the only ones who have succeeded in automated retail at such a high price point.

In the states, it’s already moving towards where we think it’s going to move eventually. Like every bank has an ATM, every retailer should provide the opportunity to buy products whenever you need through shop windows.

Despite our focus on the services side, I don’t see the Powerpod operation falling away too much, it still has legs, and it’s still doing well.

We just signed a contract with Sydney Trains, which was a big growth opportunity. There’s still plenty of geographic growth in our retail operation, and there are new product categories and concepts we’ve got waiting in the wings.

One part of being a sole founder is that you have to do everything yourself, which was a struggle starting out.

That was also coupled with the nature of the business, which was a cross between a product business, a retailer, and a technology business.

I had to put a focus on the products side around sourcing and quality control, and a focus on retail via sourcing good locations. On top of that, we threw in a need to move our technology forward.

For any new business owner, this is one of the greatest challenges — going from specialised work to being the jack-of-all-trades.

I definitely agree with the phrase “behind every great man is a great woman”. My wife took on more than her fair share of parenting in the early days of the business, looking after our three boys.

I’ve seen the results where there’s not much support if one person in the partnership isn’t behind starting the business. Without support from my wife, starting Powerpod would have been really, really tough.

Compared to when I started out, the product has evolved, it is now ubiquitous. We’re now selling a wider variety of products, not just powerbanks.

In terms of the industry, not much has changed, [but] I think we’re on the verge of change.

Every man and his dog in the vending industry warned us, saying “no one can sell anything but snacks and drinks”. We’ve proven you can successfully do it.

Vending machines will soon not just be complementary to shopfronts, but they’ll come in all shapes and sizes, such as kiosks inside the store. This lets staff focus on higher value activities rather than just transacting with customers.

We’ve got a big announcement under wraps, so over the next six months we’re working on rolling that out. It’s a very exciting future, we have a great vision and we’ve been putting together all the pieces to move towards that vision. It’s all coming together now.

There’s huge potential in the deal we’re doing not just here in Australia, but overseas. I hope to be an international player in a few years.

It’s a big vision but it’s definitely within our grasp.

where can i buy a power pod, i am very interested live in north wales

With vending machines having the ability to take Cashless Payments… this now opens up the limitless amount of opportunities. Being able to no have to hold on to any cash in the vending machine means less of a target for thieves, remote monitoring ensures stock control, re ordering of stock as well as knowing when the machine needs to be refilled. We are in a great place to have all types of vending machines supply customers 24/7.