Rich Tales: Athletic women should play tennis to get rich, but it’s a wide open field for men 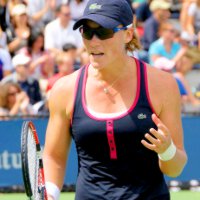 On the Rich 200, there isn’t a single one. If you consider the Young Rich, which only looks at Australians under 40, you get no fewer than eight.

But overall, for all but the best, sport is not the way to riches, and even then, it won’t get you that rich.

That’s especially the case if you’re a woman. Women’s sports worldwide are far less likely to see you earning the big money. On BRW’s last list of Australia’s 50 best-paid athletes, compiled in 2012, only two were women. Most champion women just weren’t paid enough to rank on the list.

But there is one sport where men and women are paid, at least at the elite level, more or less similar amounts, and that’s tennis.

This relative equality isn’t just the case in Australia. Globally, there are plenty of female tennis players reeling it in as well as the men. Forbes has just released its list of the world’s 10 best-paid tennis players in 2013 – counting prize winnings as well as endorsement deals.

That list has five men and five women on it. Highest-ranked Federer made $US68.2 million in 2013, of which only $US3.2 million came from his tour winnings – the rest came from sponsorships. That’s almost twice what the next best-paid Rafael Nadal made. The best-paid woman, Maria Sharapova, who was the third best paid overall, made $US3.5 million from tour winnings, and another $US26.5 million from endorsements.

If you consider men and women though, there are more basketball and American football stars among the best-paid athletes overall. Only Roger Federer, who with over $US70 million in earnings in 2013, makes the top ten.

If you look through the list of Australia’s best-paid athletes, there are more cricketers than anything else.

So, our cricket stars are paid pretty well. But they’re not alone. If you plan to get rich through professional sports, the precedent suggests that if you’re male, you’ve got a few to choose from. Women, however, would do well to focus on tennis, or get rich the way most people do, through starting a business.