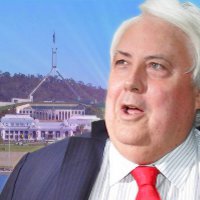 In 2013 the market rose 15%, buoying many of the fortunes of our Rich Listers.

But some have nailed their colours to the masts of more interesting companies or causes than most.

Here are the four Rich Listers SmartCompany thinks you should keep an eye on throughout 2014, and why:

We’ll be seeing plenty more of Clive Palmer, and you probably aren’t surprised.

The Queensland mining magnate’s electoral bid was far more successful than most expected, and now, he controls just under half the swing votes the government needs to get legislation passed in the Senate.

What he’ll do with those votes is anyone’s guess. He’s displayed some surprising priorities so far – such as wanting to inject $80 billion into the healthcare system, as well as allowing asylum seekers to fly into Australia on a $800 return ticket, no visa required (hearings to be given upon landing, with unsuccessful asylum seekers flown back) .

But this correspondent expects the most interesting things he does will have little to do with voting. Palmer has parliamentary privilege now, and a long history of scores to settle with the Liberals.

In the 1970s, when he was a student, Palmer was working his way up to being a lawyer in Brisbane. While working for the Supreme Court, he told biographer Sean Parnell he witnessed police coaxing self-incriminating testimony out of someone who was mentally handicapped. He told a junior state Liberal MP, and shortly thereafter saw himself demoted to delivering the mail. After receiving several threatening phone calls, he says he left the state in fear of his life.

He went to South Australia, where he became a leading figure in the breakaway Liberal Movement – a sort of DLP of the political right. But business beckoned, and he made his fortune, some of which he donated to the Liberal Party. But when Queensland Premier Campbell Newman sacked hundreds of public sector workers, Palmer revolted, donating $250,000 to a union fund for sacked public servants, vividly denouncing what he saw as the government’s “rape and pillage” of the state. These comments led to the suspension of Palmer’s lifetime membership of the Liberal Party. He resigned and founded Palmer’s United Party shortly afterward.

The point of the history lesson is this: Palmer has never engaged in politics quietly. Don’t be surprised if he uses his pulpit to hammer the government with more flair and passion than the opposition.

It’s been a few years since Craig Winkler left accounting software provider MYOB, the company he founded. And since then, he’s become heavily invested in Xero, MYOB’s leading competitor and the largest stock on the New Zealand Stock Exchange.

Xero was founded eight years ago, and is worth over $5 billion by market capitalisation.

So unusual is its position that Kiwi fund managers are asking for it to be stripped out of New Zealand’s leading stock indices – they say it distorts them too much!

In the year to June, the accounting software firm tripled its market capitalisation, and since then, its share price has doubled again. That made Winkler a very wealthy man, again.  After dropping off the Rich List a few years ago, he stormed back onto it, with a fortune of $275 million in June. Xero’s share price has gone up even further since the release of that list, and BRW thinks his stake in Xero alone is now worth $550 million.

That kind of growth has plenty of investors queasy. But the company’s executives are heavily invested themselves, so at least everyone has plenty of skin in the game.

Xero CEO Rod Drury said last year that he thinks his company is at “the beginning of a massive market shift as small businesses globally realise the benefits of connected cloud solutions”. If he’s right, Winkler’s fortune could rise even higher. Or the whole thing could come crashing down. After all – Xero has never made a profit. That doesn’t tell the whole story, but it sure does make you pause.