Rising like a star: How Kyle Lam brought the next big thing in fried chicken to Australia 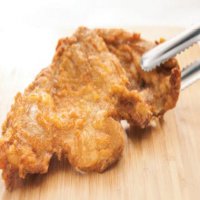 Kyle Lam was born into the food industry. His parents started their first restaurant in 1996 and Lam worked in the restaurant while he was growing up. In 2012, he decided to go into business for himself.

Lam, alongside entrepreneur Lili Shi and his siblings, decided to bring a popular Taiwanese bubble tea franchise called Gong Cha to Melbourne. Following its success last year, he decided the Hot Star Chicken franchise would also be a good fit for the Melbourne market.

“Bubble tea is a very summer oriented drink, so in the winter months business is quieter, but with Hot Star Chicken now it balances out,” Lam says.

Hot Star Chicken originally started in the Shilin night market in Taiwan. The first store was so successful two more opened up in the same market.

Lam’s biggest challenge when bringing the business to Australia was that he had to fly staff from Taiwan to teach the new Australian employees.

“That was the most important thing. We had to learn how to cut the chicken in the right way to ensure it makes 30cm long pieces,” he says.

“Adapting the concept to the Australian market was also a challenge, as we had to ensure the flavours we used would be popular here. Everything else was pretty easy. Finding sites and funding haven’t been big issues for us.”

Lam chooses locations for his stores which are “heavy foot traffic locations”, thus choosing to open in Swanston St in Melbourne and Liverpool St in Sydney.

Lam’s first job for the day is to drop his daughter at childcare and his wife at work between 8am and 9am.

“Then I come in and I don’t really have a set schedule,” he says. “I do whatever needs to be done as soon as I can. Even when my friends ask what I actually do it’s hard to answer. If someone isn’t in the kitchen I’ll go in and help out.”

Hot Star Chicken stores are currently all company owned; however, the intention is to eventually build it into a franchise.

“Our initial thought was to open five stores to prove to the market the stores generate good results,” he says.

“The format of the stores is quite small since the concept originated in Asia. Rent is also cheaper having smaller stores. It’s hard to find locations which are small enough for Hot Star Chicken, so when we do we’ll divide the space and have one Hot Star Chicken store and a Gong Cha bubble tea store next to it.”

Lam works takes a hands-on approach within the business, having discovered he prefers this method.

“I thought I wanted to work behind a desk and dictate the business from there, but I’ve found it’s not me,” he says. “I can’t help but get involved; I don’t know what it is.”

In managing his business relationship with Lili Shi, the pair have divided the rights to the stores between the states.

“Lili has the New South Wales and Queensland stores, while I have the Victoria and South Australian stores,” he says. “But if there is an event we’ll team up.”