“How hard could it be?”: How a neuroscientist became the owner of a caravan park on the Nullarbor

To check in at Robyn Tyson’s business, you have to go a little off the beaten path.

First, drive about eight hours from Adelaide to Ceduna, the start (or end, depending on how you look at it) of Australia’s famous Nullarbor Plain, and home to one of the world’s longest highways.

After about another hour down the road, just past Bookabie and kilometres of sprawling scrubland, catch a left onto Fowlers Bay Road, and continue for another 30 minutes. You’ll happen across a town, consisting of a few people and even fewer houses.

At the end of West Terrace, fronting onto a pier stretching out into the Great Australian Bight, you’ll find Fowlers Bay Caravan Park, owned and operated for the last two years by Robyn and her husband Simon.

What you won’t find, however, is a serviced electricity or gas supply, with the whole town powered by solar, and sustained by water collected from nearby sand dunes. You might also struggle to find well-maintained roads, public toilets, and adequate mobile phone coverage.

It’s far from the first place you’d think to start a business in your early 50s, but for the Tysons, the far-flung coastline was the ideal place to fulfil their lifelong dream.

“We always dreamed of moving and working by the beach, and we decided a good way to do that was to buy a small business on the coast,” Tyson told SmartCompany.

A geneticist and neuroscientist by background, Tyson says she’d always wanted to be a marine biologist and was drawn to the South Australian coastline due to its thriving whale population. But with her husband also from a non-business background, running the caravan park was more difficult than the two anticipated.

“We’d never owned a caravan or stayed in a caravan park in our life, and when we first had the idea we thought how hard could it be?” she says.

“It turns out it can be quite hard. Despite the caravan industry still showing strong growth, we ran into a lot of challenges when setting up the business.” 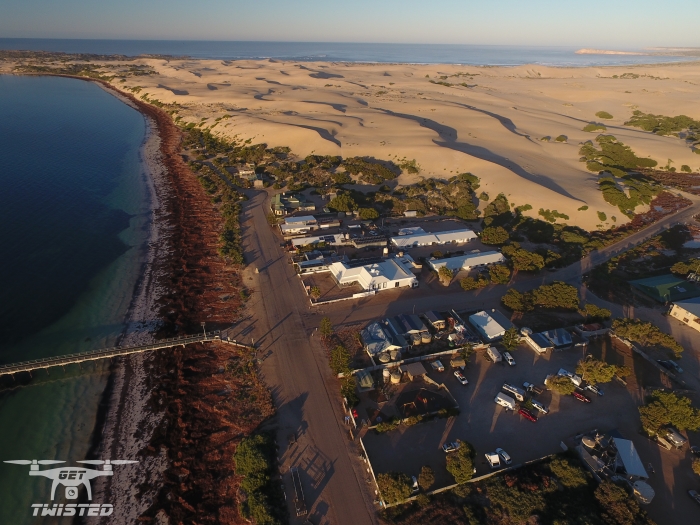 Taking over the business from its previous owners was quite a task, with Tyson struggling to find an accountant who would understand the business and its unique location. Similarly, getting a bank to understand just how remote the SME was proved difficult.

On top of this, Fowlers Bay has a population of just 20, and with the caravan park being one of the main attractions in the town, Tyson and her husband became more than just business owners, running everything from community cleanup days to the local arm of Australia Post.

“We never expected to be out here advocating for increased mobile phone coverage and road improvements,” she laughs.

The two have also struggled to find employees for the park and ran the business entirely by themselves for the first 12 months.

“While we managed that pretty well, I quickly realised balance was important and so was our quality of life. So we made the decision to give up a bit of profit to employ some people, and we’ve found we’re enjoying our lives more because of it,” she says.

“We’ve found some good workers, but out this way, we still rely a lot on backpacker-style employees.”

And while one might think that business would be slow hundreds of kilometres from a capital city, Tyson says she’s been very happy with how the business has been operating, though admits the caravan park relies heavily on word-of-mouth to nab customers.

Winter is also the town’s busiest season, with tourists attracted to the idyllic bay to fish and go on whale tours. Being an outback town, Tyson says Fowlers Bay doesn’t get “properly cold” in winter but says the town in “renowned” for being quite windy.

The struggles of being remote

Tyson says what she enjoys the most about running Fowlers Bay Caravan Park is the diversity of people she’s able to meet, with travellers from all around the world dropping in as they tackle the Nullarbor.

However, with those travellers can come criticism, and the business owner says she’s had to learn to have a thick skin when it comes to criticism of her business.

“Being so remote, we don’t have all the bells and whistles of a larger park, and some people aren’t so happy about that. I’ve learnt to not take negative comments to heart,” she says. 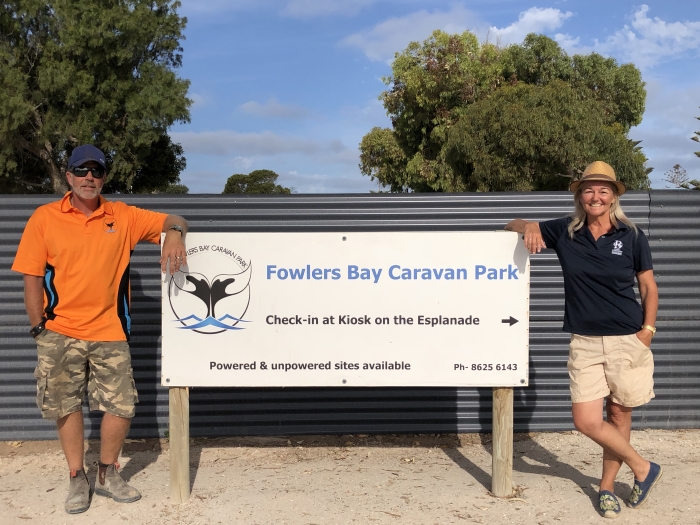 The two have grand aspirations to see the park grow, hoping to purchase some more land to put some cabins on, along with wanting to run their own tours of the area. These plans are currently being stunted by planning approval issues, however, as the local area isn’t represented by any city council.

“Our planning approval process is currently being updated, and it’s tricky because we’re a coastal business and there’s no local council. We’re currently pushing for some improvements to the road leading into the town, as you currently have to drive part on a gravel road that’s rarely maintained,” she says.

At times, the park has struggled with issues unfathomable to city or rural business owners, such as the time it ran out of water completely, or when the two had to nearly break out the defibrillator unit after a dicey medical situation.

After two busy years in Fowlers Bay, Tyson says she’s learnt to value balance above all else, saying it’s important for business owners to not work themselves into the ground.

“You may make more money, but your quality of life will become worse,” she says.

“I’ve also found the value of having a realistic business plan. We prepared a business plan when we first took over, and the other day I pulled it out and looked at it again and realised that we definitely should have been a bit more realistic.”

NOW READ: When is the ideal time for entrepreneurs to write a business plan?