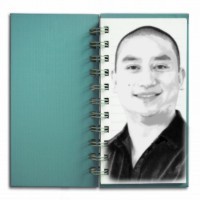 Bao Hoang and his two business partners have always been ambitious about their food venture, but not even they imagined how popular it would become in such a short amount of time.

Hoang started the Vietnamese food franchise Roll’d 18 months ago alongside his cousin Tim and primary school friend Ray. The trio wanted to create an alternative option to sushi, bringing Vietnamese food to the masses.

Very much a family business, his sister is a franchisee, his dad the delivery driver, his wife the brand manager and his mum and aunty the brains behind the recipes. Even though they’ve commercialised the business, Hoang hopes it will never lose this family touch as he believes it’s been the secret to the business’s success.

Aggressive growth has always been part of the team’s strategy. Currently there are 14 Roll’d stores, but Hoang intends to have close to 20 by the end of the year.

“We launched in the Melbourne CBD first because we thought the corporate market was really key for us since we require people to have our food two or three times a week to make it work because of our price point,” Hoang says.

“We didn’t have any major food and beverage backing, but we learnt very quickly although we didn’t make a lot of money in the first two months. We opened the first store in May 2012 and we didn’t open the next until September that year. We always knew if the first store went well we’d open another three to four in quick succession to test the market in a quick way.”

The group is now turning over $20 million. Hoang spoke to SmartCompany about the benefits of being a family business, managing aggressive growth, and squeezing a six day week into five days.

“It’s very unfortunate I don’t have a good routine at the moment. I have three kids and I fall asleep around 2-3am and get up around 6.30am.

“I get around four hours sleep at the moment. A couple of days a week I drop the kids at school when I’m not interstate and then I’ll go either into our Oakleigh office or to the Hardware Lane office in the city.”

Hoang spends most of his day working with the franchisees on business and strategy development.

“I focus on where we’re going next, what staff we need to bring on and how we’ll manage the growth and the business development. I like to do the meetings myself and follow up with the other franchisees. I’ll also check out other potential store locations.”

Roll’d has had hundreds of applicants to be franchisees, but 80% of them are turned away.

“It’s about selecting the right franchisees for what we’re looking for. For me, I’d love to have multi-unit franchisees. We’re aiming to have 40 stores in Melbourne, but I’d prefer to have eight franchisees,” he says.

“I want to develop a strong business portfolio which allows us to ensure we have franchises in the system for the long-term.”

Hoang’s knowledge of franchising stems from his previous career as a physiotherapist and franchisee of the Back in Motion business.

“We wanted to grow aggressively. We currently have 14 stores and half are franchises. To do that you have to either have a lot of money, be able to borrow a lot or adopt a franchise model,” he says.

“We grew very quickly and that took a fair bit of capital, so franchising was our best option.”

Because Roll’d is only 18 months old, Hoang says franchisees need to be flexible and willing to understand the business is still developing its processes as it grows.

“Passion for the brand and drive is also really important. Interestingly, seven out of eight of the franchisees are non-Asian, that’s just the way it happened, but they all had tremendous passion,” he says.

“The other key factor is management. We need people with good management skills. A lot of the stores will have up to 12-13 staff in the store who they need to take care of.”

In managing the fast growth of the company, the involvement of Hoang’s family has been crucial.

“We’ve had family members owning parts of each of the stores as we’ve developed the back-end processes with lots of trial and error, but because they’re family, they’re more lenient.

“If we’d done it any other way we’d have really struggled as lots of improvements and changes would have been hard to manage with store managers outside of the family.”