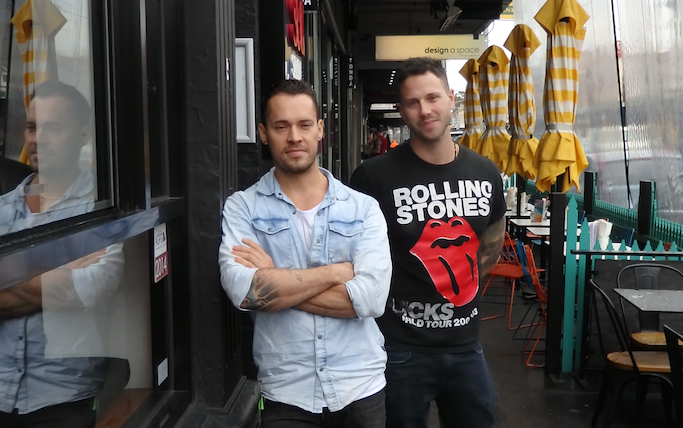 The founders of Sauced Pasta Bar say that they let the market, rather than passion, drive their decision to enter the hospitality industry. Their customers, on the other hand, seem to get pretty very fired up about food.

“We came in hungry. Absolutely famished to point of discomfort and pain,” one diner says in a review of the fast pasta business, while others praise the restaurants for “not taking itself too seriously” as it rolls out quick dishes after a customer inputs their desired base, sauce and size. People want food that’s consistent, fast and exactly to their tastes.

These are the needs that friends Sylvan Spatarel and Ben Thompson now aim to satisfy, after they traded their corporate day jobs to launch a pasta shopfront in the Melbourne suburb of Windsor three years ago.

The duo had never worked in the restaurant industry aside from in casual jobs as youngsters, but had their eye on expansion early and the business now generates $3 million in revenue a year. The goal is to double that revenue in the next 12 months, which Spatarel and Thompson think the business is on target to do.

SmartCompany spoke with Sylan Spatarel (pictured left, above) about how to spot up and coming areas when expanding a business.

We entered hospitality probably because we’re crazy, I think.

When we really came up with the concept, it was about offering a healthy and nutritional fast food dining. Everything is fresh product, it’s not a sloppy bain-marie afterthought.

We thought it was a really viable idea – it was a gap that was shouting out. You can get casual dining with Mexican and juices and everything, but not pasta.

We both love business. We’ve loved this journey and we have other ideas rattling round in our heads.

I’ve had to quit a corporate job that was paying me quite nicely [to do this], but there was a drive to do something different.

Without a doubt I think my corporate experience helped. When you run your own business, you’re everything, including relationship management, dealing with different suppliers, and no doubt that [corporate] experience helps.

I worked previously at Red Bull and I think Red Bull is unbelievable at their below the line stuff. Things like, “how do you grow a brand without a big marketing budget?”

We’re two young guys and we don’t have a huge marketing budget. So for things like how to use social media effectively, those kind of lessons were really [important].

My studies helped me as well; I’ve got a business degree and a Masters in marketing. I spent eight years studying, but the best education has been starting my own business. The reason I did the business course first was that I just loved business, and I knew in some way at some time it was something I wanted to do.

The thing those courses don’t teach you is getting a business off the ground.

Benny and I are the ones who drive each other. It works really well. We have some great backing with investors as well, and you get a lot of faith and a lot of drive from that.

In the first year-and-a-half, we were working 80 hours a week. Early on it was challenging – we were the founders and drivers of the brand and had two investors [come on board].

We were four guys with big personalities and big ideas. We’re three years into that now and we’ve developed a real friendship.

At the start, everything thinks they know better. Now, we have defined goals within the business.

We’ve just opened a store in St Kilda. The site was split into two separate businesses, we launched a café out of one side. The plan is to turn the coffee shop into a cocktail bar at night.

We’re also part of a new gourmet style food court at Chadstone Shopping Centre. Chadstone was that one opportunity that you’d be silly to say no to if all the numbers stack up, and we believe in the strength of the brand now.

We want to be in a high foot traffic location, and we’re kind of taking long-term, strategic looks. In St Kilda, you can see in St Kilda the council is making a really big effort [with improvements]. You work that sort of stuff out.

You don’t want to be where what’s hot right now, you want what’s hot for the next four years out of a five-year deal.

I left home when I was very young and I think moving out of home at a young age helps [with business]. Leaving at 16 means you have to live in the real world, figure out how to talk to people and get jobs.

I think preparation is the key to success, if you have time and a plan. If you go at it really willy nilly and don’t think about what you’re doing, you’re in a bit of trouble. People don’t understand how much goes into the background.

You have to understand that it’s really, really difficult – and my first thing is that it’s never always harmonious.

For other business owners, first of all, you have to be really objective.

You can fall in love with your own idea and you don’t see the flaws in it. You fall into the trap of thinking it’s a great idea – but is it?

Do your break-even analysis. How much is everything going to cost you? Ask, where are you going to get the capital and finances?

I had mentor once that said “throw up shit in the air and something will stick”. We all have those little babies [that don’t work out], and probably for me there are still a few. I’ll have to revisit them now and see.