The story of Scrub Daddy: How this sponge business became the most successful Shark Tank company ever

Like many entrepreneurs, Aaron Krause’s story is one of humble beginnings, starting in the 90s with a small car-washing business which grew into a sizeable US-based company selling car buffing pads all over the world.

“At one point, I knew every company in the world who produced foam,” Krause proudly tells SmartCompany.

And like many entrepreneurs, Krause thought his business days were over after his company was acquired by Fortune 500 manufacturing conglomerate 3M in 2008 as part of a “life-altering deal”.

But Krause’s life was soon to be altered even further, all thanks to a humble dish sponge called Scrub Daddy.

Strictly speaking, Scrub Daddy had existed for a number of years prior, with Krause saying he developed the idea for it in the early 2000s while in the middle of fixing his warehouse’s machinery.

“My hands were always dirty, and the lotions made for mechanics are awful and nail brushes were too small to clean your whole hand, so I was trying to figure out a way to make a material from urethane foam which could scrub your hands clean,” he says.

His encyclopedic knowledge of the world’s foam manufacturers came in handy, with a German company contacting him with details of a foam they’d developed years earlier to use as a filter that had ended up not being fit for purpose.

“It scrubbed my hands completely clean and also rinsed out clean, and I knew there was a way I could sell this,” he says.

But at the time, Krause had no luck. The niche market of engineers with dirty hands was too small, and no one else wanted to pay for an expensive piece of fancy foam.

Disappointed, he shelved the product and packed away the material. It wasn’t until 2011, after selling his business to 3M, that he happened across the box of samples after his wife asked him to clean some of their outdoor furniture.

“They worked so unbelievably well I took one inside to wash the dishes. It was then I realised the stiffeners in the foam changed with the temperature of the water, becoming soft in warm water and hard and scrubby in cold water,” he said.

“It was mind-altering, and I knew there was a way to market this amazing material.”

The most successful Shark Tank company

At first, Krause took to TV shopping channels such as QvC, which gave the product some notoriety and also provided the founder with TV experience. Krause then figured that experience could be better used elsewhere, and applied for season four of American reality business show Shark Tank.

“I felt like I could go on the show and get one of the sharks to invest and use all their experience in the retail world,” Krause says.

In 2012, Scrub Daddy appeared on Shark Tank and locked in a $200,000 deal from investor Lori Greiner. Today, the company is regarded as the most successful to have ever appeared on the show, with revenues over $US30 million ($41 million) and more than $US107 million in sales. 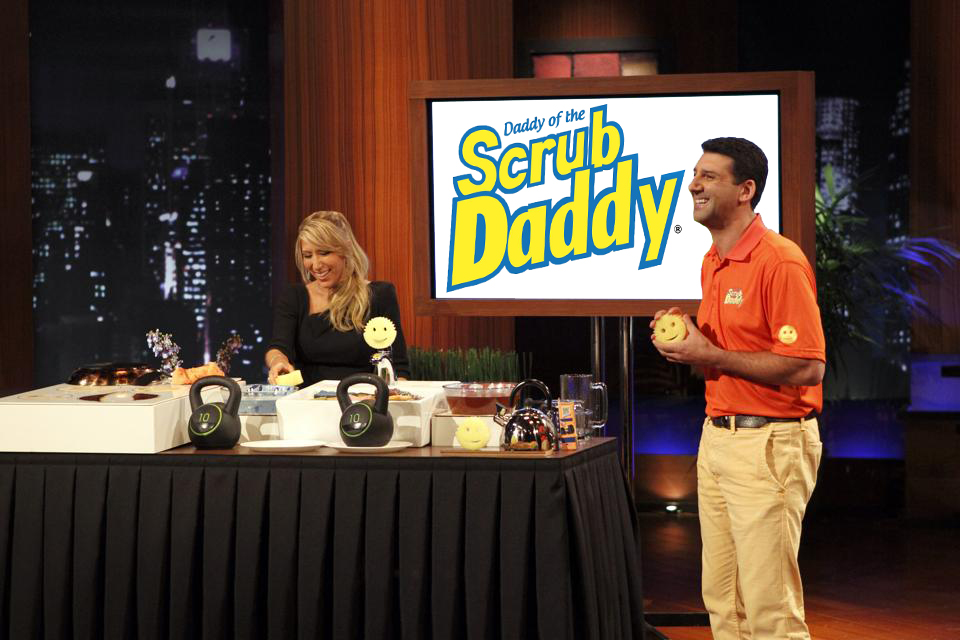 Krause is currently in Australia to kick off discussions with Coles, Woolworths and IGA to get the sponge stocked in local supermarkets. He has high hopes for the brand’s growth Down Under, saying Australia is both a sizable and sophisticated market for the Scrub Daddy.

“We’ve already done about 100,000 units on shopping television in Australia and we have a full-time distributor on the ground. We’re expecting it to be a multi-million-dollar market in a few years,” he says.

While the company’s flagship product is the Scrub Daddy himself — a round and ridged sponge with a smiling face — Krause says the Daddy isn’t the only scrubber on offer. Consumers can also purchase the Scrub Mommy, the Big Daddy, the Scrub Daisy, the Scrub Daddy Lemon Fresh, and the Daddy Caddy, among others.

“You can’t have just one product and expect to be a worldwide brand, you have to always be innovating,” he says.

A Daddy by any other name

Krause acknowledges a part of Scrub Daddy’s success is the product’s unusual and attention-grabbing name, which he explains originates from a few different places.

“In my family, the men always do the dishes, so the name plays into that a bit,” he says.

“But when we were discussing the name of the product, one of the guys said the face on the sponge looked a bit like a radical skateboard daddy, and then someone else in the office said it was a ‘scrub daddy’.”

“As soon as I heard that name, I knew it was instantly iconic, funny and memorable.”

However, not everyone was as keen on the name as Krause was, with a professor at one of America’s largest business schools telling the founder it was the “worst name he had ever heard of”.

“He told me to call it ‘magic sponge’, and I walked out of there knowing 100 per cent that I would name it Scrub Daddy,” he laughs.

For other business owners inspired by the Scrub Daddy story, Krause says companies should never be afraid to charge more for quality, saying that trying to compete on price almost led to his downfall numerous times.

“No one starts a business and says ‘I’m going to be the same as everyone else’. Don’t be afraid to be better,” he says.

“I did it the wrong way for years, trying to compete with everyone on price. I almost never made any money, and any time something unexpected went wrong I’d have to go and borrow money.”

“You just need to wait for someone who is willing to pay the right amount for a better job. Scrub Daddy doesn’t need to be a $1 sponge, it can be a $4 sponge because that’s going to help me grow my company.”

NOW READ: “It’s not cheap”: How each Shark Tank investor does their due diligence, and why deals sometimes fall through