A league of their own: How sisters Chloe and Olivia Brookman created global lifestyle brand Olli Ella without a business plan

Chloe Brookman remembers the time when a business advisor told her and her sister Olivia they didn’t have a business.

The Brookmans are the founders of popular lifestyle brand Olli Ella, known today for its modern, folk-inspired children’s products and home decor range. But back in 2010 when the pair were founding their brand in London, there was no business plan, let alone a proper budget.

“It was very much a million plates spinning,” Chloe Brookman tells SmartCompany.

“Looking back now, I can’t believe the things we did … We barely knew wholesaling at that point, but we really believed in what we did and what we were doing.”

This self-belief helped spur the sisters on, even when a business advisor looked at the margins on their first range of products and declared there was “absolutely no business here”.

Eight years on, the founders have proved him wrong and they now operate a business with offices in Australia, London and Los Angeles. Headquartered in Byron Bay, where Brookman has been based since 2012, Olli Ella employs 17 employees and has a seven-figure annual revenue.

The growth has been rapid, says Brookman, who reveals the business has doubled in size each year it has been operating. It’s also “highly profitable”, she says, a feat that has been achieved with using only fair trade practices and sustainably made products.

Olli Ella products are sold globally — everywhere except South America, says Brookman — and after starting out producing nursing chairs, the brand now also offers bedding for babies and children, as well as homewares, such as baskets and rugs.

Byron showroom full of sunshine today! What a happy space to spend our time! #olliella

It might sound counterintuitive, but Brookman says the inspiration for starting Olli Ella came about because of her’s and Olivia’s desire to find “a creative outlet” while running their own art gallery together in London.

“The art world is not always the most creative,” she explains.

The pair found an avenue for their creativity by designing a range of nursing chairs, which they then had made locally and exhibited at a local trade show. The response from their community in London was strong, says Brookman, so much so that retail heavyweight Harrods picked up the line.

The Brookmans had found a niche and they knew they could be the ones to grow it.

“It was almost like a seal of approval … [The chairs] were picked up by lots of stores and we had lots of orders; Australia was a big source of orders for us.”

The decision was made to open a satellite office in Australia, as the logistics of shipping individual orders such a long distance would not have been feasible for a new brand with little infrastructure.

It was also at this time that Chloe Brookman moved to Australia to head up the local operations in Byron Bay, while Olivia looked after the London and Los Angeles offices.

“We’re so close … we’ve really missed living in the same country,” she says.

“The challenge is always nurturing the relationship outside of the business one. Because it is something we love so much, it’s very easy to go on and on about it.”

“What we don’t have, but what I have seen in other cases, is you can have that natural competitiveness between siblings. We’ve been really fortunate not to have that.” 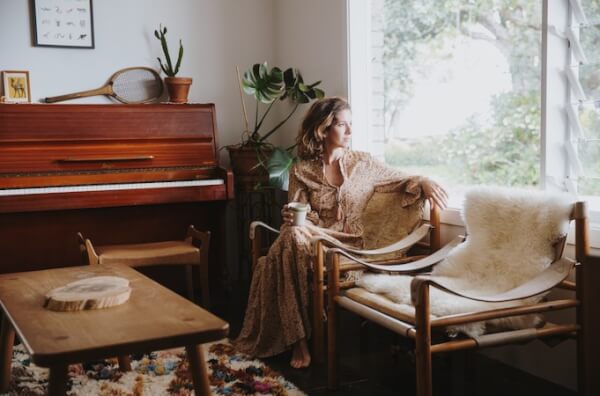 While Olli Ella’s growth up to this point has been rapid, Brookman says the business has, over the past two years, developed a more systematic approach to growing. The focus has been on bedding down the right budgets and forecasts and ensuring organisation is a top priority.

It’s a contrast to the early days, when Brookman admits forecasting and cash flow management were not at the top of the to-do list.

If she had the time again, Brookman says she would have budgeted better, to avoid those times when the bank account was “almost zero”.

But then again, she wonders if she and Olivia would have taken the same risks if they had been more focused on the numbers.

“We made so many decisions that were great decisions in the long-run,” she says.

Brookman says the company’s now more methodical approach will continue to extend to its factory and warehouse logistics over the coming year, as Olli Ella puts even more attention on growing into the US market in 2019.

“The US is a rapidly growing market for us,” she says. “We want to make sure we can service it properly.”

But growth will come in other forms too.

For one, Brookman says Olli Ella is planning to focus on, and increase, the social impact it can make.

“We’re putting a strong focus on it, starting in the international countries where we manufacture in 2019, 2020,” she says.

Approximately 95% of Olli Ella’s products are made in Vietnam and the business has been working with one of its key suppliers there since it was first starting out. The relationship is a close one; the Olli Ella team recently spent a month in Vietnam working alongside this supplier, and in turn, they visit Australia too.

“We were both really small companies when we started; they are in a poor rural village and they really care about their craft,” Brookman explains.

“We’ve grown up together.”

Customers today want more and more information about where, and how, the products they are buying are made, Brookman says, and this demand will undoubtedly increase.

“Five years ago, people were asking: ‘Is this organic?’ Now people are asking: ‘Where is this made?’

“It’s a really important question. There’s a reason why a basket from a department store costs $3,” she adds.

These demands may put pressure on retailers and other businesses, but Brookman says it’s pressure that should be welcomed.

“There’s so much competition right now, customers have the luxury to choose and really research.

“It’s good to put pressure on brands and companies and labels,” she says.

Run your own race

The market for children’s products has always been highly competitive, says Brookman, and it’s becoming more so in the areas of children’s fashion and interiors.

To stand out from the crowd, therefore, means having a defined identity and running your own race.

“Without sounding like we’re untouchable, because we’re not, I think with what we’re doing, we wouldn’t be able to identify a competitor,” says Brookman.

“What we’re doing is very Olli Ella; we have a very loyal customer base,” she adds.

Brookman endeavours to build on this customer loyalty on a daily basis; she still personally manages the Olli Ella Instagram account, which has more than 107,000 followers.

“It’s one of the main tools of communication with customers,” she explains.

The business has been using Instagram from almost day one, and as the founders have increasingly delegated roles like sales and customer service to other employees, the social platform has remained a source of direct customer feedback.

“I’m hearing what customers are saying,” says Brookman, who says Olli Ella is tagged in customer photos “hundreds and hundreds” of times every day.

“It’s absolutely vital to our business.”

NOW READ: How Olivia Carr is turning her luxury silk brand into a $50 million business (with the help of the Kardashians)

NOW READ: “We’re better than all of them”: How Melbourne headphones startup nura is planning to be as big as Bose