Thinking outside the box: How Ian Martin has given Noodle Box a spicy kick 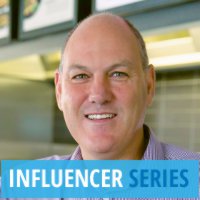 Ian Martin’s CV reads like a who’s who of the fast food industry. The 54-year-old has worked for the likes of Yum! Brands, Dunkin’ Brands and Baskin Robbins in a career which has taken him from Australia to Hong Kong, London, Singapore and the Middle East and back again. Martin has recently moved back to Melbourne, taking up the reins of Noodle Box, which turns over approximately $45 million each year.

I have worked in this industry for more than 20 years. I was in Hong Kong for seven years as the director of a food group; I went to Singapore with Yum! Brands and to London as senior vice president of international for Burger King. I worked for Baskin Robbins and I was chief executive of Gloria Jeans in Brisbane. But I was keen to get back to Melbourne.

I joined Noodle Box in March 2013. We have 74 stores domestically and five in Mauritius, and we will open our first two stores in Saudi Arabia in the new few weeks.

Previously, Noodle Box had both company-owned and franchise stores but when I joined we re-franchised the business as part of a new strategic direction. That’s now our focus.

One of the things we did when I was brought in was to bring clarity around the company’s vision and values. Our vision is very clear: we want to be the first choice restaurant for franchises and suppliers.

If you have a clear vision of success, any path will get you there.

We aim to be a world-class franchise chain and we’re very focused on that. When you have both company and franchise stores you can lose focus and often get caught in perceived or real conflicts of interest.

We’ve very pleased that of the 14 or 15 company restaurants we have franchised in the last 14 months or so, the vast majority have gone to existing franchisors or chefs within our system.

I’m a big supporter of the new Franchising Code of Conduct. I believe good franchise brands are already doing all of those things that the code is trying to bring into the industry. Where we are, there is no change to our operations. But it will take away some of the people who are behaving the way they should.

I’ve pulled off many big deals over the years in my different roles. Going way back, I acquired the Pizza Hut brand for south China for the company I was working for. At Yum, I renewed master franchise agreements, and at Burger King, we did a number of new country entries in China and Brazil. At Gloria Jeans, I acquired international rights and accelerated international growth.

Good franchising systems are based on a partnership relationship, where everyone is aligned for future success. It’s also about ensuring there is alignment and engagement with the internal team and the franchise partners. And consistent across all these things is great franchise member training and making sure all team members at store level are giving customers the same experience.

A business plan is critical. It has been essential to everything I’ve done in my working life.

We plan to grow Noodle Box by expanding internationally. The two stores in Saudi Arabia are part of a 65 restaurant deal over five years with a major partner in five countries. And we’re actively looking at one other international market to enter into in 2014-15.

But we think there are a lot of opportunities for profitable growth in Australia. Western Australia is a focus as we only have one restaurant there. We have a strong presence in Queensland, but we still see a lot of potential. We also don’t have any restaurants in Hobart, Tasmania.

We believe in profitable development, and not development for development’s sake. Whether it’s one unit in Australia or one in another country, it’s about finding the right franchise partner.

The one thing we’re striving to do is improve our franchise partners’ profitability. One of the things that really focuses your mind when you operate a franchise business as opposed to a company-owned business, is if your franchise partners are not profitable and not growing, you don’t have a business.

The market for good franchise partners in Australia is competitive so we need to be best in class.

Noodle Box has changed its approach to marketing. We’ve moved from what was, 14 or 15 months ago, solely brand-focused marketing to effectively marketing aimed at driving existing guests more frequently or attracting new users.

We’ve had a number of successful marketing campaigns. Some have been innovation-led, for example, introducing new stir fry products. But we’ve also moved to focus on value and families, which we hadn’t done previously. The Pandemonium family meal has been very successful. We have also broadened our menu to include yum cha items such as dumplings, buns and desserts.

These campaigns were based on feedback from customers. In a broad sense, our guests certainly loved Noodle Box and spoke highly of the products, but most of our transactions happen at dinner time. More than 70% of our transactions were occurring at dinner so what we were missing was that lunchtime trade.

This is a really exciting time for Noodle Box. We’re now 17 years old. We did go through a period where we stabilised and growth wasn’t coming, but we’ve changed focus.