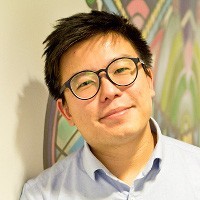 Tim Fung and Jonathan Lui have a network of 190,000 handymen and small business operators using their website.

Airtasker co-founder and serial entrepreneur Tim Fung says he knew he’d hit on a winning idea when he successfully pitched the online job marketplace to his disagreeable housemate.

“My roommate was working in the finance industry, so I’d pitch him ideas all the time and he’d always pan them,” says Fung.

“He’d say, ‘no you haven’t thought of this or you didn’t consider that’. But when I pitched him Airtasker he said, ‘that actually doesn’t sound too bad’, and I thought, well it passed that test,” he laughs.

It was 2011 and Fung had already been involved with several startups with varying degrees of success. The idea first struck when him and co-founder Jonathan Lui were packing up to move the house they shared.

“I was moving apartments at the time and calling all these people. There were so many jobs that needed to be done—packing up boxes, installing routers, building IKEA furniture. I realised people were outsourcing these jobs to cousins or friends and they were paying them with a case of beer,” says Fung.

Fung believed these transactions were not good for either party and saw the potential for an online marketplace to connect those needing a task done with those that could make some money from doing it.

Fast-forward three years and Fung and Lui, who have been mates since university, now have a network of 190,000 handymen and small business operators using the site. Airtasker helped complete 11.3 million ‘tasks’ last month – their strongest month yet – and turned over $3.5 million in November alone.

“We’ve done more revenue in the last month than we did in the first 18months,” says Fung, who is now chief executive of the company.

“It’s a really exciting time but it’s not something that’s happened overnight. It took us a while to make the transition.”

Fung sits down with SmartCompany to talk about how Airtasker is making the transition out of its startup phase, how he hopes to build the company’s culture and why he thinks Airtasker has the potential to be the next eBay.

Fung is an early riser, jumping out of bed by 5.30am. His sleeping habits perfectly complement business partner and chief operations officer Lui, who has the opposite schedule.

After getting through a round of emails while still tucked up in bed, Fung takes his newly adopted labradoodle Harvey for a walk. By 7am or 8am, he’s at the office with coffee in hand and ready to start the day.

Fung’s day typically kicks off with an external meeting, which he will try to schedule at the very start of the workday.

“I find you need to have a big block of time to do your real job,” he says.

Since going through its growth spurt, Airtasker has been busy building its team and Fung will spend a good proportion of his day working in a management role.

“When you’re an early stage startup, you do a lot more hands-on work. But as you grow, you have to take on more of an overview role and start setting in place the structures that will help people to do their work,” he says.

Fung says the company has made some exciting hires that have forced him and Lui to take a step back from the roles they once did themselves.

“What’s really great is [one hire] is proving me completely wrong on ideas I had before,” he says.

“Even Johnno [Lui], who is in a mission critical position and across all of our operations and everything technical, even at that level he’s now finding he has to give up responsibility to other guys and let them make mistakes every now and then. But most of the time they do a much better job than we can do.”

Fung says the types of hires the company is now making have also changed since its startup stage.

“In the early stage you just want competent people who can figure out a range of different things because you don’t know what you’ll be doing from one day to the next,” he says.

“But as you grow, you know what pieces of the puzzle need to be solved, so you hire a specialist in that area.”

Where it was once not as important, Fung says building a strong team culture is critical in this transition stage.

As a matter of importance, Airtasker staff now join in group activities like daily huddles, adventure sports and the all-important team-building game of Connect 4.

Fung admits growing the business has certainly put some pressure on relationships, particularly with his fiancée, who is also an entrepreneur.

“She has a business too, so at least there is a lot empathy there,” he says.

“I admit I’m still working on it. The past couple of years I haven’t had a good work-life balance, but there is a glimmer of hope yet, with all the great guys we’re hiring.”

When Fung and his fiancée do get a golden moment to themselves, they love to rock climb or head out for dinner. You will also find Fung out on the racetrack once a month with his car club.

“We blast around in street cars likes wannabe race car drivers,” he says.

Fung says Airtasker is looking at expanding further into the SME and enterprise market to capitalise on untapped potential.

“We noticed that, without any drive on our behalf, heaps of the posters on Airtasker were small businesses, posting anywhere up to $150,000 worth of jobs on the site in a couple of months,” says Fung.

Airtasker is also working with several large companies, although he could not name names, to create a “branded workforce” for them.

“For example, a business that sells furniture would need people with furniture assembly skills en masse. Right now it’s interesting because unlike other industries, services like this are not packaged up,” Fung says.

“In the world of plumbers and handymen, it’s super fragmented. So these big companies want to brand that service so that the expectations can be consistent.”

When asked if he has an exit plan, Fung admits it was something he had considered in the early stages of the business, but says it is now less appealing as Airtasker gains momentum.

“Less and less are we looking at exit an as opportunity. When we started, we had it in mind that big operators would want to acquire us, but it’s less and less of an issue as we see the opportunities that are still to come,” he says.

“We feel we can build a huge market place, in the vein of your eBays or your oDesks.”

Congrats on the progress to date…