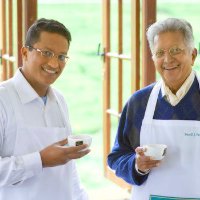 For Dilhan Fernando, the son of Dilmah Tea founder Merrill J. Fernando, there was never any question that he would go into the family business.

His father founded Dilmah 25 years ago, and named it after his sons (Dilhan donated the first syllable, while his brother Malik donated the second). Dilhan was just six when the company started, and he’s seen it grow to become Sri Lanka’s sole global brand.

Australia holds a special place in the Dilmah story. It was in Melbourne that the business was founded, and today, Australia contributes 25% of the company’s revenues.

Speaking to SmartCompany on a recent visit to Melbourne, Fernando said he’d been given a fantastic opportunity, and a responsibility, to lead the company.

He says two things drive him, both of them points of difference for his family’s tea company.

The first: Dilmah’s tea is single-origin and unprocessed, meaning the tea retains the tastes characteristic to where and how it was made.

In the world of tea, this matters more than it used to. The tea category globally is growing, but within that, speciality tea, like the type Dilmah produces, is growing in double digits.

“People say that tea is like wine,” Fernando says. “It’s always been like that. But people are starting to realise.”

Tea grown at different altitudes and at different soil has a different taste, as does tea grown in different weather conditions or in different times of the year. Most tea is sold as a commodity – where it’s all mixed together and processed into a homogenous blend. But Dilmah doesn’t do this, instead marketing and selling its tea pure.

“At the heart of it, we don’t make the tea,” Fernando says. “Nature does that. Our job is to harness that and bring it to the tea drinker.”

Dilmah’s marketing has traditionally been aimed at the mass market – think of those ads of Fernando’s father in the tea fields – but in recent years the company has changed tactics, instead pitching itself directly to mixologists and foodies.

One way it’s doing this is through its global Real High Tea Challenge, which tea connoisseurs compete in matching teas to particular meals.

Specialty tea isn’t Dilmah’s only point of difference, or Fernando’s only passion.

He says unlike many of its competitors, Dilmah is driven by far more than the chance to make a profit.

The elder Fernando started out in the bulk tea business, which, as is the case today, was controlled by what Dilhan describes as “our former colonial masters”.

“While Sri Lanka became independent in 1948, the colonial economic system continued because there was a stranglehold on tea.

“This was the essence of my father’s mission – he wanted to break that. In 1950, when he decided tea was what he wanted to do, he saw the inequity of the fact that we produce a finished product in Sri Lanka, export the product to London and the profit is made there. He wanted to change that.”

“And there are so many today, even in Australia,” Fernando says. “So much of your beautiful produce is exported in primary form. And even in the tea industry, this still exists.”

Merrill Fernando learnt the tea trade in London and then returned to Sri Lanka. He built up a business to become the country’s third largest exporter of tea. He always wanted to found his own tea brand, but it took him decades to be ready. And then, in 1988, nearly 30 years after the elder Fernando began his tea career, Dilmah was born.