‘Novelty and quirk’: How this engineer-turned-chocolatier is making her mark on an ancient art

We’re still more than two months out from Christmas, but for some small businesses, the rush has already begun.

It’s going to be an important Christmas season for the retail sector after less-than-stellar trading across a number of key categories throughout 2019, but businesses such as Just Bliss aren’t leaving things to chance.

Bateman is hard at work developing a new range of chocolate products to debut in the coming months, hoping, like many other business owners across the country, to stand out from the crowd.

“We’re trying to create that ‘wow’ moment with something different,” Bateman explains.

“When you give a gift to a family member or a friend its really important and needs to be special.”

Launched in 2008, Just Bliss began life as a wholesaler, supplying into David Jones. But in 2014, Bateman opened her own store in Adelaide’s CBD, recognising her business needed a new home to evolve into. 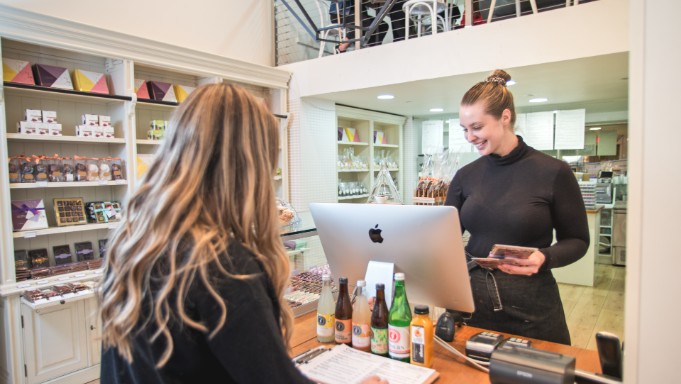 For more than a decade, Bateman was an engineer working in plastics manufacturing, but taking inspiration from her entrepreneurial parents, she decided to begin applying her talents to life as a chocolatier.

“I really enjoyed manufacturing and working in research and development, I also grew up with a certain background because my parents were small business owners.

“I wanted to be able to put the two together … chocolate is just another material,” Bateman says.

Chocolate production dates all the way back to the Aztec peoples of Central America, but even several thousand years later there’s plenty of room for new combinations, shapes and types of products.

For an engineer-turned-retailer, chocolate is a material to get creative with. Source: supplied.

Bateman’s passion for trying new things has won her business a loyal following, with office workers in Adelaide dropping in regularly to see what new creations are lining the shelves.

It’s come with national attention too. After opening her e-commerce store, offering overnight shipping nationwide, Bateman attracted an order from Hamilton Island, Queensland, more than 2,300 kilometres from her retail store.

Chocolate isn’t the easiest thing to ship either. Bateman works with a freight partner that understands her business’ special requirements and handles packages with care.

But having ironed out the kinks, e-commerce has quickly become one of the most important elements of Just Bliss’ business, supported by a growing social media presence.

“It’s about creating a bit of novelty and quirkiness around your product,” Bateman says of the evolving social media landscape.

“It’s not about traditional advertising anymore, you can think up a product in one day, put it on your Instagram account, get feedback, and then have those customers walking in tomorrow.”

E-commerce has been a winner for Just Bliss, but Facebook isn’t the gem it once was. Source: supplied.

“In the early days we were able to see more cut through [on Facebook], now it’s a lot harder and more expensive.

“It’s going back to finding different ways, we’re focusing more on our products now and trying to be different and clever.

“That should always come through, constantly giving that experience to the customer,” Bateman says.

Whether its Facebook, freight or point-of-sale and accounting software, running a small business in Australia is increasingly about choosing the right third parties to deliver technology solutions.

For food and beverage-focused businesses such as Just Bliss, the rise of on-demand platforms such as UberEats and Deliveroo has been the big third-party story in recent years.

“The economics of it just doesn’t make sense for us. We’re more into gift-giving and we have a logistics partner for that we’re working with at the moment,” Bateman says.

Bateman’s more immediate focus is ensuring her product range is keeping up with the significant shifts underway in the types of foods consumers are looking for.

As large corporations invest billions in plant-based foods, Bateman is betting her new range of dairy-free milk chocolate, made with coconut milk, will be a hit with customers looking to keep it vegan over the holidays.

“All the dairy alternatives are more popular these days. Traditionally, dark chocolate is dairy-free, but some customers want a different flavour experience.”

NOW READ: How local chocolate brand Darrell Lea went from collapse to being sold for $200 million

NOW READ: Inside the BugHerd saga: How this startup came back from the brink