Grugeon has today launched The Good Beer Company in Queensland, a social enterprise that will give 50% of its profits to the Australian Marine Conservation Society (AMCS) to help raise awareness about the dangers facing the world’s largest coral reef.

The “Great Barrier Beer” is a mid-strength pale ale that has even been given the tick of approval by Prime Minister Malcolm Turnbull himself.

“The Prime Minister and Barnaby Joyce had a taste test and they loved it. Turnbull even said: ‘How can you not smile when drinking this beer’. We’ve got it on tape,” Grugeon told SmartCompany.

Grugeon moved to Australia five years ago and began working for Powershop, a green energy company that has raised over $2 million for charities. Having hailed originally from the United Kingdom, Grugeon wondered why there were no social enterprise beer companies down under.

“My idea was not an original one, there are two great companies like ours that already exist, Finnegans in the US and Two Fingers Brewing Co in the UK,” he says.

“I contacted them to get advice on how to make it work in Australia, and the guys from those companies are now on our advisory board.”

Grugeon knew his first challenge was determining both a cause and a charity partner, along with a brewer to complete the contract work. He quickly identified the Great Barrier Reef as an issue close to many Australian’s hearts and sought support from the AMCS.

“I knew how challenging it was for [the AMCS] to raise money, and the director and the board were up for the idea and supportive from the get go, which was amazing,” Grugeon says.

Grugeon selected Queensland craft brewers Bargara Brewing Company to brew the Great Barrier Beer, saying the brewers are “environmentally responsible” and in touch with their community. 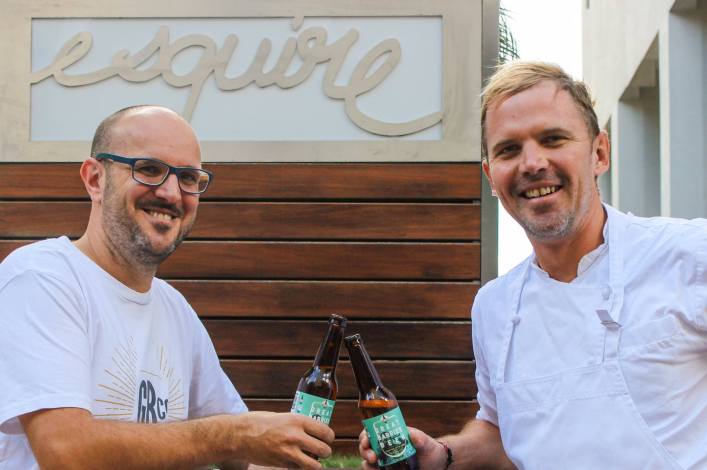 The difficulties of crowdfunding

A last minute decision lead to Grugeon funding the first batch of beer through a crowdfunding campaign on Indiegogo, which raised $37,000 for the company. This, coupled with $20,000 in pre-orders, provided enough capital to get the business up and running.

“The crowdfunding campaign went okay, and I think it was good because you learn a lot in the process. It’s intense and you’re doing something every day just to try to get across to people,” he says.

“You need to communicate with someone around eight times before they’ll back your project and make a contribution. We quickly found out how essential social media was, and telling the story through all our different channels.”

Despite never having run a business like The Good Beer Company before, Grugeon’s experience stems from a number of charity focused roles he held in the UK. Starting his career in government communications, he became the chief executive officer of Environmental Protection UK in 2010 before his move to Australia.

“It’s not just about the funds we raise”

Grugeon hopes to expand The Good Beer Company, with plans to introduce more brews for different charities across Australia. However, he stresses the business is “not just about the funds we raise”.

“We’re really looking to bring attention to charities that might find it hard to get noticed otherwise, and having their logo on the side of the beer goes a long way towards that,” he says.

“I received an email from the guy who runs AMCS, and he said it was the best exposure they had ever gotten.”

However, Grugeon recognises the business’ longevity also relies on more than supporting charities.

“For this to be a long-term proposition, we need to brew a good beer that funds good causes. We also need to sell beer in volume, so right now we’re trying to get into restaurant chains, bars, clubs, anywhere that will take us,” he says.

One place that was more than happy to take the Great Barrier Beer on board was national alcohol retailer Beer Wine and Spirits (BWS), which signed on to stock the beer in 100 stores across Queensland. Soon, Grugeon hopes to roll the beer out to both Victoria and New South Wales.

Conversations to lay the ground work for the deal took “several months”, but Grugeon praises the retailer for being both eager and cooperative.

“Our deal with BWS is really encouraging and exciting for us and sends the business a great positive message,” Grugeon says.

“We were also really lucky as not only were they up for being the first supplier, but they were able to give us favourable payment terms and price.”

“I’ve had some other brewers ask me how we managed to move so quickly, and without BWS’s support of us we wouldn’t have been able to do it.”

Grugeon is currently running another crowdfunding campaign through ING Direct’s Dreamstarter initiative, which will help the business fund the next type of beer to be brewed. To determine the type of beer and the labelling, Grugeon is putting it to a public vote.

By the end of the next financial year, Grugeon hopes to have five different beer types available and has lined up the support of four different major charities. Although he is choosing not reveal the specific charities at this time, he says the business will be expanding through the charities’ licensed venues, which Grugeon believes is an excellent way to ensure exposure for the beers.

Grugeon believes one of the hardest parts in launching a social enterprise business is the lack of public awareness of this type of business, but he believes staying transparent is the best avenue for success.

“Most consumers and the average Australian are not familiar with the term ‘social enterprise’,” he says.

“For us as an organisation that wants to sell beer and raise money for good causes, we have to do it in a way that’s sustainable. It’s about how to explain to people the additional value in operating in a way that benefits society.”

“What you’re doing has to be real and have transparency. We share our financials, and we’re clear with people with where money is going and what it’s funding.”

Great article no bull just straight to the point with relevant background. .

But the bubbles in beer are Carbon Dioxide. And Carbon Dioxide is evil. It allegedly is hurting the reef through climate change. Therefore his beer is assisting in killing the reef. How does he sleep at night?

Another Craft Beer (probably a Pale Ale what Else), this time ‘Brewed with Passion’ is the 50th one this month, it is getting hard to keep up..