Grigor Dimitrov of Bulgaria in action during his men's singles first round match at the Australian Open 2020. Photographer: Lynn Bo Bo.

Bulgarian tennis player Grigor Dimitrov has caused quite the stir at this year’s Australian Open thanks to his on-court outfit, but the Melbourne textile designer who created the look has been taking the debate over his navy spotted tracksuit in her stride.

Cassie Byrnes is already well known in Melbourne for her bold and bright, colourful designs, which she has been creating for the past eight years. She sells a range of clothing online and from her design studio Variety Hour, creates large scale murals, and has even designed packaging for ice-cream brand Haagen Daz.

But this is the first time she has designed outfits for tennis pros. She says it has been “fantastic” working with the Nike design team to create a mix-and-match range to be worn by the likes of Serena Williams, Australian Nick Kyrgios, Dimitrov and Ukrainian Elina Svitolina.

My print on @serenawilliams for @nikecourt ???? Where do you even go from here?!?! Stick a fork in me I’m done ???? #ausopen #serenawilliams #nikecourt #nike #tennis #australianopen

The designs are part of a complete range for NikeCourt, which the sports label commissioned Byrnes to create after seeking out a designer who could create a truly ‘Melbourne’ range of outfits. As well as being worn by Nike athletes at this year’s open, the items are also for sale via the Nike website.

In an interview with Oyster Magazine, Byrnes explained that the collaboration has been a two-year process.

“The [Nike] team from the US came out for the 2018 Australian Open, they walked around the streets of Fitzroy, and then their whole mood board was just full of super Melbourne-centric images — like of Gertrude, Smith, and Brunswick streets,” said Byrnes.

“They saw some of my products in shops and as they researched ‘Melbourne Design’ — my name came up a lot. I only found out recently that they all separately had me in mind as the person they wanted to work with, which was nice to know, because you often doubt yourself. They called me up and asked me what I thought, and I was down to do it.” 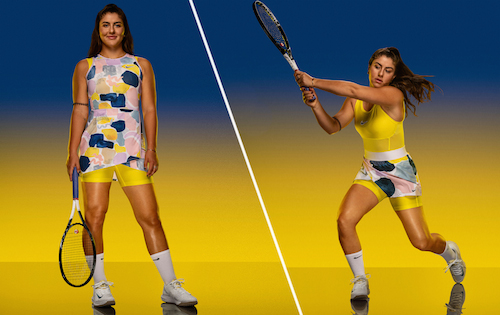 Some of Byrnes’ designs for NikeCourt. Source: Nike

Byrnes said her concept for the range was inspired by the Australian landscape during the prehistoric era, with landmasses and rock formations featuring heavily. She combined this imagery with abstract expressionist art to develop the final designs, with the Nike team asking her to produce something truly local.

“We worked so well together, especially as I got to work with their textile designers — which I don’t usually get to do through other projects — so we spoke the same language. They told me, ‘you do you — we want it to be Australian and really represent that part of the world in your style’,” she said.

It’s clear Byrnes is a name to continue to watch in the Australian fashion and textile world, and while some tennis fans have been divided over some of her Australian Open designs, Byrnes is using her Instagram account to see the lighter side of their remarks. Check out her Instagram stories to see for yourself.