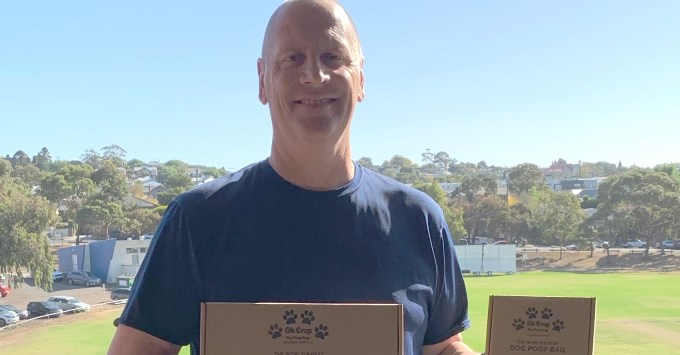 While they say you can’t polish a turd, an Aussie company is making sure you can at least dispose of it responsibly and sustainably.

Each day, the equivalent of a Volkswagen Golf’s worth of dog poo is put into landfill across the country, thanks to the 3.7 million crapping canines living in Australia.

“It all started when we had just gotten a new rescue dog, and I was getting sick of putting plastic bags into the bin, so I went to find a solution,” Hultgren told SmartCompany.

The appropriately titled ‘Chief Crapologist’ has a long history in the business world, having started as a professional basketballer in the NBL before starting several businesses in the sporting and gifting industries. However, he was shocked at how quickly Oh Crap got off the ground, expecting months of planning and product design before launch.

“I had a contact in China, and I emailed him about the idea. Two hours later, he got back to me with a solution. I was expecting to have a bit of time to work on it, but I had one of those ‘holy shit’ moments,” he says.

“We immediately started developing business plans, our brand, and looking into the market and how we could best position ourselves. I was registering business names, putting in minimum order quantities, all the stuff you sort of take for granted in business.”

The business name itself, Oh Crap, was picked simply because “it’s fun”, says Hultgren, which is a principle the founder bases much of his business around. Everything the company does is designed to “put a smile on your face”, he says, with salespeople and distribution managers often having a chuckle after being pitched the product.

The company is currently doubling in size every six weeks, with Oh Crap now starting to bring in shipping containers full of bags from China. The company has also hit a milestone of three million bags saved from landfill, and is fielding distribution requests from the Middle East and France. The bags are made entirely from cornstarch and break down completely in just three months. Hultgren says while the company was operating long before the supermarkets’ ban on plastic bags, the resulting discussion around sustainability following the ban has helped the company’s growth.

“We were already experiencing good growth, but the ban spurred awareness on the issues behind plastics. People are ready for this product now. I think we might need to send the supermarkets a Christmas card,” he jokes.

The team is currently in the process of negotiating a number of deals with local councils across Victoria, with Hultgren also putting together designs for vandal-proof dog-poo bag bollards for walking trails, which will stock Oh Crap poo bags.

Oh Crap’s future is bright (much unlike a turd), with the founder already planning ways he can sell his poo bags worldwide. He’s also planning to launch a new brand, appropriately named ‘No More Plastic Crap’, which will focus on eradicating plastic from all other areas of life.

And though Hultgren and his companies are fighting the good fight on reducing plastic waste, the founder says he doesn’t view himself as a pioneer of the sustainability movement. Rather, he says he’s just “doing what I can do”.

“We’re just really focusing on what we do, and doing it well. This is coming from the public, with a realisation we can’t wait for it to be done from the top down, it needs to come from the bottom up.”