“We needed to do something”: Why innovative wheelchair business Push Mobility expanded into the hand sanitiser market

Having experienced first-hand the challenges of living through a global pandemic with a disability, Aussie entrepreneur Shane Hryhorec made a quick business pivot in a bid to address an under-serviced need and help support his community.

Hryhorec launched his Wheely Hand and Wheely Surface products in the space of just four weeks, and sold “thousands” of units in the first week alone.

Sourced from New Zealand manufacturer Zoono, the products have been proven to protect against some coronavirus strains. According to Zoono, they can protect hands for up to 24 hours, and help keep surfaces clean for up to 30 days.

“My first wheelchair was horrid,” he tells SmartCompany.

“I was surprised that companies were providing equipment of the standard they were in 2007.”

The business now has two warehouses, one in Melbourne and one in Queensland, and has expanded into different types of wheelchairs, as well as sporting equipment and consumables.

Hryhorec has also been involved in beach access projects, helping make the Aussie outdoors more accessible to people with disabilities.

“We’ve managed to do quite well in the business over the years,” he adds.

“We haven’t relied on one sector or one income stream.”

Since the COVID-19 pandemic hit Australia in March this year, Push has moved to offer video appointments and support for clients, as well as shipping demo equipment for product trials.

But, while adapting everyday business operations is one thing, Hryhorec also found himself making and unplanned and unexpected move into a whole new sector.

“It started off with me not being able to get sanitiser for myself,” he explains.

During the first few weeks of the pandemic, shops were stripped bare of hand sanitisers. At the same time, the regular online providers that many people with disabilities use for their regular supplies were also run dry, with products being bought out by commercial stockists.

“It was really frustrating,” Hryhorec says.

A wheelchair user touches their wheels thousands of times a day, he explains, thereby transferring any germs from the ground onto their hands.

At the same time, germs on anything they touch, in the supermarket, for example, will also be transferred onto the wheels, where they will stay.

“You put that on top of having an underlying medical condition, and you’re too afraid to leave the house, full stop.”

Hryhorec himself isolated early, he says.

“Most people with disabilities I’ve spoken to had done exactly the same thing.”

He started researching sanitiser products that would be suitable for wheelchair users and discovered Zoono, a manufacturer of sanitiser that has been proven effective against other strains of coronavirus.

Rather than cleaning surfaces as a one-off, the product is designed to form a protective layer that kills germs as it encounters them.

According to Zoono, the hand sanitiser can protect skin for up to 24 hours, and the surface spray will repel germs for up to 30 days.

Initially, Hryhorec simply ordered the products for himself. Then, the entrepreneur in him kicked in.

“I was hearing a lot of stories about people with disabilities not being able to access sanitisers,” he explains.

“We needed to do something about it.”

He reached out to Zoono, explained the problem he had identified, and set out trying to find a way to get Zoono’s products to people in Australia.

“It was a great opportunity to work together and help the community that otherwise wouldn’t be able to access the products through normal channels.” 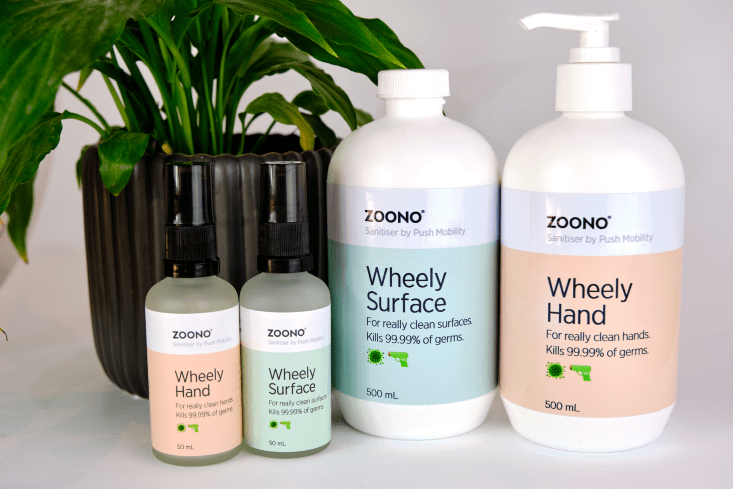 “Should we have done this?”

Having discovered Zoono and identified the resale opportunity, Hryhorec managed to turn his new business arm around in just four weeks.

He sourced bottles from a supplier in South Australia, got labels designed and printed, and went through the whole bottling process, all while learning and adhering to safety standards and providing PPE for his team.

It’s a completely different line of business than the entrepreneur is used to. And he admits it hasn’t been quite as simple as he first imagined.

“I thought it would be as easy as ordering the product, putting it in bottles and sending it out there,” he says.

“But there were a lot of other things we had to consider … then there were the safety practices about meeting the standards of filling, and having people in the building, making sure we were practising social distancing.

“There were a lot of things we had to consider that we otherwise hadn’t thought about.”

Also, like many of the COVID-19 pivots we’ve seen Aussie businesses make, everything was done in super-speed.

“We launch products all the time,” Hryhorec says.

“But we usually do it over several months.

To pretty much launch a sanitiser brand, end-to-end in a month, was definitely quite a bit of work.”

And, there was a moment — albeit a fleeting one — where he thought he might have bitten off more than he could chew.

About a week in, Hryhorec and his team had a lot of stock and a lot of bottles, and was faced with the task of the bottling process.

“The full extent of the work that was required hit me [and I thought], ‘damn — should we have done this?’”

But, this is a founder driven by mission. And he didn’t hesitate for long.

“It’s always been my thinking when it comes to opportunities like this, that if you have the ability to help it’s your obligation to do so,” he explains.

“This is something that is needed. We are in a position as a business to help support our community. We will do that without hesitation.”

And the effort paid off. The first week of sales for the Wheely Surface and Wheely Hand products was “pretty amazing”, Hryhorec says.

“We had a couple of thousand sales,” he adds.

Also, he saw a trend of people buying the ‘duo’ packs, so they could have bottles in several different places.

But, again, for Hryhorec the benefit here is not necessarily financial. His mission is to help people feel safer and more confident in leaving their homes.

“Especially when restrictions start to get lifted and people can start entering the community again, I think a lot of people with disabilities are going to be generally terrified about what that looks like for them,” he explains.

“They will be scared to take the first pushes outside their door.”

Wheelchair users were among the first to go into isolation, Hryhorec says. They will likely be among the last to come out.

“This won’t be the solution, but it’s a layer of resistance,” he adds.

“It’s something that will help in the gradual process of going back into the community and society.”

Everyone has had to make changes, and quickly, to adapt to life during the pandemic, but Hryhorec feels that in the rush people have not realised what it’s like to have a disability at this time.

“People are afraid to leave their front door to go around the block, let alone to the shop to get groceries,” he says.

“The stories of people with disabilities haven’t been told through the pandemic. And people don’t know what it’s like from the seat of a person with a disability,” he adds.

For example, while cafes have remained open for takeaway services, many have placed hand sanitiser in places where wheelchair users can’t reach them.

As they implement emergency measures, they’re making quick decisions, he notes. That means considerations around inclusivity are getting lost.

Hryhorec says considering accessibility at this time will go a long way.

“I want the general public to hear those stories and be aware of the struggles faced by people with disabilities during a pandemic,” he explains.

“It’s really hard for a lot of people to go out and do normal things like go out and go into shops and cafes that aren’t accessible.

“For the ones that are accessible, it would be great if their sanitiser dispensers are also accessible for people of all abilities.”

NOW READ: This Melbourne business owner is raising $10,000 to send care packages to nurses on the frontline, and support small businesses along the way