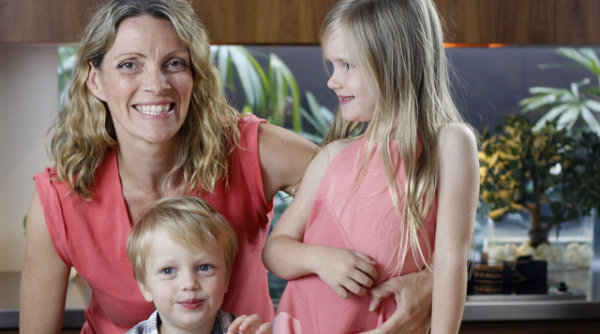 “It was supposed to be ‘fun’ but it was just a scream-fest,” Rachel Grantham recalls of the 90-minute window between 5.30pm and 7pm when she would attempt to bath, feed and play with her one-year-old daughter after work.

It was easily the most stressful part of her day. “There has to be a better way,” she kept thinking.

The engineer turned corporate risk analyst tried batch-cooking on the weekend to alleviate the pressure mid-week.

“But then I spent all this time on the weekend cooking preparing for the week ahead — not just enjoying my daughter,” she says.

“I still wasn’t winning. I had just traded off different time.”

Grantham started looking around for some healthy, and convenient, dinner options for younger children. When her search — four years ago — came up with nothing, it gave her the idea she’d been waiting her whole working life for.

“But there was nothing for kids. I thought if I’m feeling this pain, other parents must be too,” she says.

“For me it was always a matter of when not if [I would start a business] and this was it. It was my ‘aha’ moment.”

And so Little Bud, now a thriving business, was born to give kids genuinely healthy meals and parents some breathing space.

It began at the Bondi Markets in Sydney.

Rachel hired a chef to help develop recipes, which she tested on the families in her mother’s group; she drove around, dropping meals off as a dinner service and got valuable feedback. If kids don’t eat something, parents won’t continue to buy it.

“It was a quick and cost-effective way to test the product,” Grantham says.

She rented a restaurant kitchen on a Friday afternoon to make the meals and the first official day of trading was a disaster.

To start with they made too much food and she had underestimated how long it would take to fill the containers; she ended up worked through the night until 6am on the Saturday to have the meals ready. It then stormed so badly the markets were called off.

Rachel was heartbroken at the prospect of 100 meals with a four-day shelf life going to waste.

She hopped into her car and dropped them off to the various independent grocery stores in the area. “It accelerated our entry into stores,” she says.

The next week they traded at the markets and sold out very quickly.

“That was a good test of our first assumption that people will buy this product,” Grantham recalls.

Demand was so solid that they only traded at the markets for six weeks before being stocked in stores.

This was due, in some part, because of Rachel’s ‘neighbour’ at the markets who gave her the details for a buyer at the Norton Street Grocer.

Rachel was invited to do a live demonstration at their Bondi Junction store and she stood there, by this point pregnant with her second child, from 8am until 6pm for three full days.

“I didn’t want to miss a single customer,” she says.

“And it was a roaring success. We sold out.”

She quit her job at CBA and after six months, the business outgrew the sublet kitchen in the restaurant and rented their own in Alexandria.

At that point Katrina Hollis, a chef who has worked at Sydney restaurants Rockpool and Icebergs and mum of two, came on board to help set up the kitchen and develop really tasty food. Jess Killigrew a food technologist and mum of two, was another critical addition to the team.

Together they created a solution to the biggest problem with their food: they didn’t want preservatives in the meals but the short shelf life was a problem. Using a blast chiller and sealing technology they were able to maintain a “free from nasties” approach to the food and extend the shelf life.

Being stocked in Harris Farm was a big turning point that paved the way for entering the major retailers.

Today Little Bud is stocked in select Woolworths stores  in New South Wales and Victoria, Coles stores, and online, in NSW, Victoria, Queensland and the Australian Capital Territory, and a range of IGAs and other good independent grocers.

Breaking into the big supermarket chains has been a slow process. Both Woolworths and Coles expressed interest in the product more than a year before they began stocking it. In just two months the revenue has grown tenfold as a result.

In the lead up, Little Bud engaged a manufacturer in South Australia because the volume required exceeded its capacity in Alexandria. The business is now making 4,000 meals per week.

National distribution and expanding the product line into other nutritious food products for kids are the next priorities.

In hourly terms Grantham says there is little difference between the corporate hours she once worked and the hours she spends growing her business.

“But the difference is I am in control of my days,” she says.

“It was harder in the early days when it was just me, which wasn’t sustainable. But now I have a great team and my work environment is set up to make my life easier.”

It has taken four years but Grantham has delivered on solving the nightly problem that pained her and many other working parents.