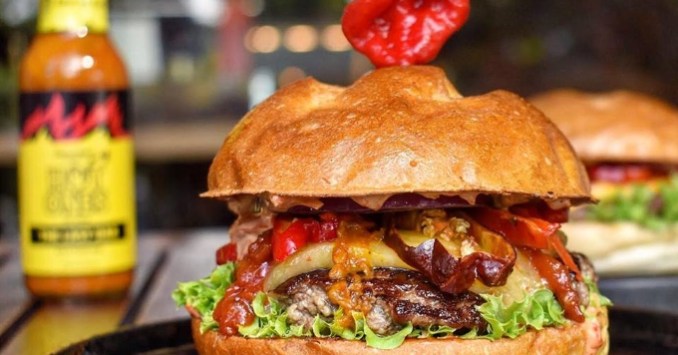 A single burger joint in regional Victoria has thrown down the gauntlet against one of Australia’s largest burger chains over claims it has the “hottest burger in Australia”.

Monroe’s Burgers & Beers, a small business located in Healesville, has challenged prominent burger chain Burger Urge to “put their money where their mouth is” over claims its “Double Deathwish” burger is the hottest in Australia.

Monroe’s claims its similarly named “Deathwish” burger conceived in May this year should claim the crown.

The business was founded two years ago by burger-loving best friends Gary Bright and Paul Stephens after a “crazy scheme” conceived over a couple of beers ended up becoming a reality.

“Our passion was for burgers. Gary and I would do burger road trips to try all the different burgers out there. We were definitely armchair critics,” Stephens tells SmartCompany.

“Gary moved to Healesville a little while ago, and while there were a million cafes, there was nowhere you could go and get a burger. We talked it out one night, and the next morning we woke up and couldn’t find a reason not to do it.”

With their burger expertise firmly on the eating side rather than the creation side, it took some time for the two friends to iron out the ‘perfect’ burger. But after opening in July 2016, the business surpassed expectations from day one, and the two began to offer a different burger special every week to “keep it fresh” for both them and the customers.

It was one of these specials that formed the base for their challenge to Burger Urge. After being ribbed by customers over the heat level of their standard menu burger ‘El Diablo’, Monroe’s founders decided to create the hottest burger they could.

“We said to the customers ‘come back in a few weeks, we’ll mess you up’,” Stephens laughs.

This lead to Monroe’s “Deathwish” burger being created in May. The burger contains four of the world’s spiciest chillies (determined by the Scoville scale, a universal spice-o-meter) including an entire fresh Carolina Reaper chilli, one of the world’s hottest chillies at 1,569,300 Scoville units.

Stephens says the business sold around 40 Deathwish burgers during the week of the promotion but received a massive amount of engagement on social media due to the burger’s unfathomable spice.

“About half a dozen people ate it like it was nothing, but on the other end of the spectrum we had crying, shaking, and even a few sneaky vomits,” he says.

“But every single person said it was the hottest thing they’d ever tasted.” After this effort, Stephens and Bright were understandably put-off when Burger Urge unveiled its recent Double Deathwish burger, which contains slightly less spicy ghost chillis (1,041,427 Scoville units) and requires customers to sign a waiver before eating.

Monroe’s challenge invites the founders of Burger Urge down to Victoria to have a one-on-one taste test challenge to see which burger has the highest level of spice, with the loser having to rename their burger to “Ok, maybe it’s not even that hot” for one week.

Stephens stresses the challenge is “tongue in cheek” and a bit of friendly competition, and says the similar names of the two burgers is likely a coincidence.

“We’ve contacted them, and it’s definitely in the spirit of friendly competition. We hope they’ve for a good sense of humour and a bit of fun in them, and they want to come eat two crazy spicy burgers,” he says.

As of yet, Burger Urge has not responded, and SmartCompany also did not receive a response from the company prior to publication.

Any food-eating Australian will have likely noticed that burger joints have started to gain near milkbar-level of prominence, with numerous different independent and chain stores located in every capital city in Australia. Regional business owners are getting in on the action too.

Stephens says the burger scene is very close to being a saturated market but maintains there’s still room in the market for those who want to do it “to the best of their ability”. He believes Monroe’s location out of the hustle and bustle of Melbourne has given the business an advantage but means the owners have to build a business people will travel for.

He also believes the strength of their weekly specials sets Monroe’s apart.

“The weekly special strategy has led to some crazy high engagement. It’s new and exciting, and customers love a challenge,” he says.

“At the same time, you have to be able to back it up. If it doesn’t taste as good as it looks, then it’s just a flash in the pan.”

NOW READ: Stoush between two ad agencies settled with hot sauce as owners say it was “just a bit of fun”