“It was never about the shoes”: How Rollie Nation founder Vince Lebon created a global brand

The coronavirus pandemic has “levelled the playing field” for local footwear brands, according to Vince Lebon, founder and CEO of cult brand Rollie Nation.

“Before we were competing against the big guys, but they are the ones getting hit by high rents and wages,” he tells SmartCompany.

“It’s harder to cut through, but if you have a good message and a good product, you can do it,” he adds.

Named one of the top 50 people in e-commerce in Australia last year, Lebon is using his online experience to continue crafting both Rollie’s message and product to unlock new growth for the footwear brand even amidst a global pandemic.

Founded in Melbourne by Lebon in 2012, Rollie Nation has developed a loyal following for its lightweight, yet fashionable derbys and boots. It recently added a new range of sneakers to the mix, and Lebon has more to unveil soon.

The company employs a team of 15, who have all been working remotely since mid-February, and its shoes are stocked by more than 500 retailers in Australia and New Zealand, as well as nine other countries including the US and the Netherlands.

Prior to the most recent financial year, Rollie Nation had a compound annual revenue growth rate of 62.8%, Lebon says, and for the past two years, 60% of the brand’s sales have come from online.

The founder admits he is “very used to high growth numbers”, but the 2019-2020 financial year will be the first year Rollie Nation has maintained, rather than grown, its sales levels compared to the previous year.

“The challenge for me is how do I keep a mindset that is realistic, but cautiously optimistic about the next financial year,” he says.

This cautious optimism comes, in part, from remaining laser-focused on the brand’s mission, and being prepared to rethink some of the ways the business works — as has been the case for many other Australians businesses. Lebon says the past few months have been an opportunity to take stock, look at processes, and ask: “What’s really needed?”

“I would always look at growth over cutting costs, so how do we continue to grow and find opportunities in the current market?”

As a leader, Lebon says his focus has been on “providing clarity” for his team and making sure everyone continues to be aligned with the company’s mission — which is less about selling a pair of shoes and more about how someone feels when they wear a pair of Rollies.

It’s an emotional time, Lebon says, and leaders need to be empathic. But, that doesn’t mean you can’t still see results.

When the coronavirus pandemic hit, Lebon says everyone in his team continued working full-time for as long as possible, before moving to four-day working weeks. But it didn’t make sense to expect the same output with fewer hours being worked, so the founder moved his team to 48-hour “team sprints” instead.

“The first sprint we did accounted for 93% of our sales for the next month,” he says.

“It’s about being super focused”.

A market stall and family inspiration

Lebon had worked in the footwear industry for eight years before taking the leap to launch his own brand.

He spent six months designing his first product, and says the concept was inspired by his wife Kat, who’s nickname is Rollie, and was working as a flight attendant at the time.

“I was really inspired by my wife and her travels,” Lebon says, who wanted to design a pair of shoes that Kat could travel in all day, but which were fashionable too.

The aim was to follow in the footsteps of other footwear brands that have been successful in Australia by keeping it simple.

“The footwear businesses in Australia that have done well, like Volley, or international brands like Havianas, are focused on single products,” he says.

“I wanted to build something around the derby.”

The Rollie brand made its debut at a pop-up market stall at South Melbourne Market, which Lebon had originally booked for six weeks. He sold out of the first run of 500 shoes within five weeks and then booked the same stall again three more times that year.

The buzz generated by the shoes set Rollie on a fast growth trajectory, with the brand then picking up the biggest footwear retailer in Dubai as its first wholesale account, Lebon says.

“The product was good, and I had been in the business for a while,” he explains.

Rollie shoes are designed to be super lightweight, and feature soles made from energy-returning EVA. While plenty of sports brands now promote the lightness of their shoes, back in 2012, Lebon says “lightweight was associated with cheap”.

“The biggest challenge was getting people to understand the value of lightweight shoes,” he says.

“People would try them on and wonder why they were so comfortable. They are comfortable because they are lightweight.”

As well as its signature derbys, Rollie also designs a range of boots, and last month added its first range of sneakers, which Lebon had been working on for some time.

Having spent the past three few years in the US, the designer witnessed the sneaker category take off, as sneakers become a regular feature of people’s day-to-day wardrobes. While in the US, he won two scholarships to the Pensole Design Academy and worked with Adidas as a Brooklyn Farm designer.

The launch of the Rollie sneaker range is the “first step of diversifying out of the classic derbys”, Lebon says, but it wasn’t a step he took lightly.

“We didn’t want to just jump into sneakers because it was trend-based,” he says.

“If we entered into the category, I wanted it to be genuine, to offer a point of difference and be true to the brand.” 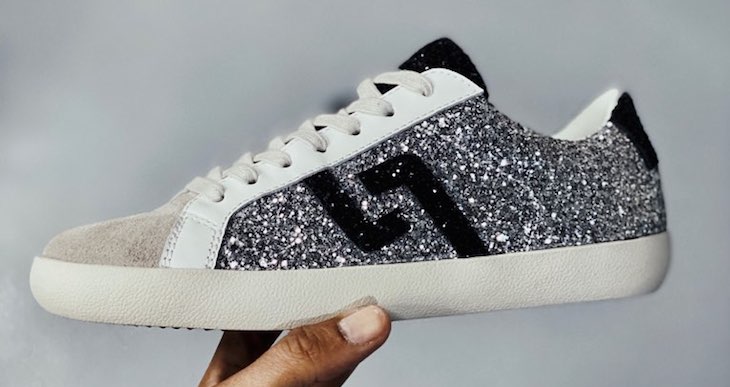 A pair of sneakers from the new Rollie Nation range. Source: supplied

“I wanted to build something special”

Reflecting on the Rollie journey, Lebon says the value in building a meaningful brand is clear. And he’s learnt that where you choose to put your focus, is what you will end up getting.

“It’s very easy to build a brand that is profitable, but if you only focus on being profitable, you can end up with a brand no one cares about,” he says.

So, it’s about finding the right balance between financial returns and longevity. And knowing that growth comes with costs.

“I had a pretty nice business two-and-a-half, three years after launching,” he recalls.

“We’d built a community, we were in Nordstrom, everyone thought we were killing it. But because we were growing so fast, it required a lot of capital.

Knowing what he does now, is there anything he would do differently? Yes, Lebon says.

“Something I think people don’t talk enough about is it is very easy to look to investors for money, but if I was doing it again, I would definitely look for a low-interest loan, rather than an investor,” he says.

Having investors means giving away some control of your business, says the founder, who, a few years after launching Rollie, took on investment from another independent Australian footwear company.

But two years later, Lebon bought the investors out as he felt they weren’t aligned with his goals.

“They wanted to sell shoes and I wanted to build a brand,” he says.

“They were also not willing to take the same risks as I was.

“I wanted to build something special.”

We’re going a bit dotty cooped up at home in Melbourne but our Derby Beige Black Spot is giving us good vibes on our #rolliearoundtheblock! #rollienation #enemiesofgravity #derby #shoes

Standing out from the crowd

Lebon says the Rollie team has spent the past 12 months documenting the brand’s purpose, as it prepares to roll out even more new products and continue telling the company’s story.

One of the brand’s strengths, he says, is its high rate of repeat purchases — many customers own between four and seven pairs of Rollies. This is an important part of the story the business wants to tell — that when people buy a pair of Rollie shoes, they want to buy another.

The Australian footwear retail industry is highly competitive, Lebon says, and high levels of imitation among brands has traditionally been a problem.

“The thing I don’t necessarily like about the local footwear industry is that once something takes off, people just copy it,” he says.

In the past, designs would often be copied from overseas creators, Lebon says, but he hopes that is starting to change as “everything’s more accessible now”.

It’s also why having a brand focused on “something bigger” is vital.

“It was never about the shoes,” he says of the motivation behind the Rollie brand.

“That’s been our north shining star, and why we’re not seeing the same drops [in sales] at other brands.”

When asked what advice he would give to other entrepreneurs who are starting out in their business journey, Lebon says it’s about “reading the market” and adapting when you need to, especially in the current economic climate.

You may need to cut costs, but “don’t just cut costs for the sake of cutting costs,” he says.

“You also need to look for opportunities.

“There are opportunities at all times.”

NOW READ: Staying at the top of the tree: How Sam Wood grew his home workout business by 40% over the past six months