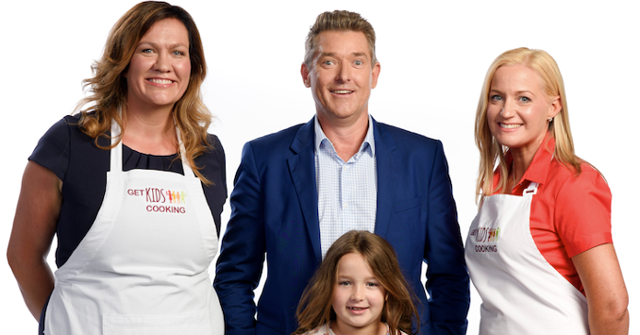 Glen Richards with Get Kids Cooking.

Another round of excited pitchers did their best to impress the sharks on last night’s episode of Channel Ten’s Shark Tank, with business ideas ranging from lice prevention kits to abusive alarm clocks.

Joanne Bowskill and Holly Boal are two entrepreneurs who swam with the sharks and left with a deal, coming away with a $150,000 investment from Glen Richards for 20% equity in their business.

Their business is Get Kids Cooking, a service that looks to provide hands-on cooking classes for primary school children around Australia.

The service also hopes to combat obesity in Australian youth, as they believe teaching kids healthy habits when they’re young is the most effective way to keep them healthy as adults.

These days, Get Kids Cooking is in more than 30 schools.

Boal told SmartCompany she has struggled with “keeping tight lips” about her experience in the tank.

“The pitch took place last November, and we went through all the due diligence with Glen and got the deal finalised in April,” Boal says.

“Since then it’s been full steam ahead.”

The service offers two different options for both schools and parents. The first is the ‘Cook in a Box’, which provides ingredients and instructions for recipes to be made in schools.

The other option is the Kitchen Kart, which is a full-size mobile teaching kitchen, which the duo displayed to the sharks in their pitch.

The Kart includes an oven, sink, and full equipment to get kids cooking, and the design is protected internationally.

“Glen actually gave us the idea to internationally trademark and IP protect the Kart,” Boal said.

“That’s been very handy, as we’ve started to get some overseas interest in the Kitchen Kart.”

The business idea came from Bowskill, the founder of the business, in late 2013 after her son’s cooking course was cancelled at his primary school.

Boal, a long time friend of Bowskill, came on board in 2014, and the two poured all their efforts into the business.

“We didn’t say no to anything during 2014, we wanted to get as much experience as we could,” Boal says.

“We started to gain traction in schools, and the NSW Agriculture Society approached us and asked us to do their Easter show.

“We cooked for over 4000 kids, and somehow I’m still alive after that.”

Boal says the events Get Kids Cooking has attended have been a great source of marketing, with the business having done many local council festivals, and some Westfield Kids classes.

She believes the business’s success so far has stemmed from kids’ interest in cooking, but says there is not enough encouragement from schools and parents.

“Kids love cooking, but some parents are a bit afraid,” Boal says.

“Cooking definitely skipped a generation there at some point, it’s offered in high schools but there’s no real course for primary schools.”

Boal and Bowskill met with the Department of Education to link Get Kids Cooking with health curriculum in schools.

When it came to the pitch itself, Boal says both she and Bowskill were very well prepared.

“We’re surrounded by people who also work in business, and Jo [Bowskill] ran her own small businesses for many years,” she said.

“We’ve also been very fortunate to have supportive husbands who keep the bank account topped up.

“We’ve been able to live and breathe it, and we were both so passionate about making it succeed.”

Get Kids Cooking is aiming to be in 10% of the 7,500 primary schools across Australia, though Boal says that’s a long-term goal.

For other entrepreneurs, Boal says one of Get Kids Cooking’s greatest strengths has been having two people at the helm.

“Having a good partner or friend there with you is a great way to split tasks, and also have a great sounding board for ideas,” Boal says.

“It’s also very important to be smart in your business, especially early on.

“We haven’t wasted any money, we made sure we controlled our cash flow. My husband and I taught ourselves skills like web development, which was a great way to control costs in the early days.”

Also getting a deal on Shark Tank last night was wall-building system Pentablock, getting a $150,000 investment and $200,000 loan from Janine Allis, for 17% equity.