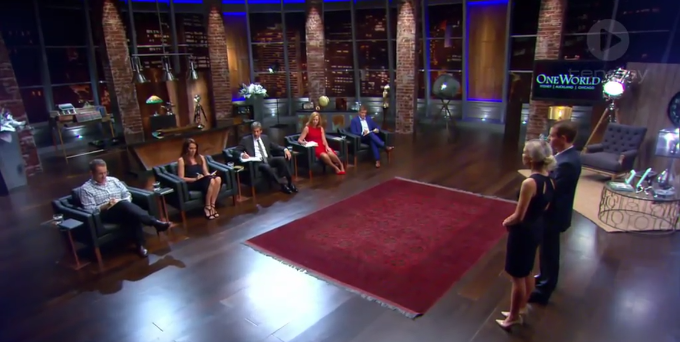 Last night’s episode of Shark Tank was the last of the season, and Channel Ten’s reality television program for entrepreneurs saved the best until last.

Numbers were flying left and right as four lucky entrepreneurs pitched to the sharks, and all four of them walked away with deals.

For the finale, many of the sharks decided to travel in packs, with three of the four deals made with multiple sharks.

First up in the tank was Lil’ Fairy Door, a children’s toy company which makes novelty ‘fairy doors’ – tiny doors that kids believe fairies come through. The doors also have an area for notes from the ‘fairy’, which allows parents to encourage positive behaviour in children, such as room cleaning.

Sally Copus, the founder of Lil Fairy Door, was seeking a $325,000 investment for a 20% equity in her business. In the last financial year, the company made $700,000 in revenue, and its products are currently sold by more than 1000 stockists.

Faced with a lucrative business opportunity, the sharks could smell blood in the water, and each shark offered a deal to Copus. After some deliberating with her fairies on hand, Copus requested the sharks team up.

Glen Richards and Naomi Simson paired together, while remaining sharks Steve Baxter, Andrew Banks and Janine Allis formed an alliance. Despite the group of three sharks offering $486,000 investment for 30% of the company, Copus decided to go with Richards and Simson’s offer of $325,000 for 20%, and the option of a $325,000 loan.

“I can’t believe I got all five sharks!” said Copus on the episode.

“I definitely think we made the right choice, they’re going to be a huge part of how we take Lil Fairy Door to the world.”

Next up was Sydneysider Matt Harris with Vegepod, a self-contained vegetable and herb planter. He was seeking a $75,000 investment for a 10% stake in his business, along with a $150,000 loan to help him expand into the US.

Baxter started with his trademark “G’day mate, where ya from?”, before questioning Vegepod’s sales. Harris revealed the company had sold 4200 units and was in over 100 retail outlets, and the business had turned over $200,000 in the last four months.

The sharks were concerned with Harris’s stock coming in from China, on which he pays Chinese interest rates of 6-7%. However, the profit margins from the product itself were enough to entice the sharks back for another bite.

Simson agreed to a deal with Vegepod, although Harris didn’t make the agreement himself, bringing in “the boss”, his daughter. The boss agreed to Simson’s deal of $75,000 for 10% of the company, along with the $150,000 loan.

In her post-show blog, shark Janine Allis said that “the margins were actually quite good and [Harris] had a strong vision.”

“A vision for the business is really important as without that, you are basically driving blind,” Allis said.

The penultimate deal was done with Luke and Vanessa Gosden from Torque Safe, a business that manufactures and sells safety switches for dangerous hydraulic torque tools. The business was valued at $2 million, and the entrepreneurial duo were seeking a $300,000 investment in exchange for 15% equity.

The idea for the product came about after Luke’s workmate had his hand crushed by a hydraulic tool. He hopes that his invention will become industry standard.

“If you’re out on a remote mining site, there’s no medical attention apart from the EMO on-site,” Gosden told the sharks.

“They have to get a flying doctor flown in, and there’s huge medical bills, and it can be a slow process.”

Despite Baxter offering a ‘hand’ to show the dangers of the tool, the duo displayed the devastating effects on a tomato. After seeing the safety potential of the tool, and hearing the positive sales margins, the three male sharks lined up a deal.

The Gosden duo walked out of the tank with a $500,000 investment, for 50% equity in the business, split between Baxter, Richards, and Banks.

“It’s exciting to have three of those guys just to be able to help and mentor us, and see where it takes us,” Gosden said.

Finally, the sharks set their sights on Greg Ollerhead and Kate Fuller, who pitched the sharks their biggest deal yet with furniture producer and designer OneWorld. Ollerhead and Fuller were seeking a $700,000 investment for a 20% stake in the business.

In 2010 OneWorld made the BRW Fast 100 list of fast growing businesses in Australia, and projects revenue of $27 million by 2020. Currently, the business is valued at $3.5 million.

Glen Richards revealed that his wife was “absolutely a customer” of OneWorld’s Noosa store, but was baffled at why the business was seeking investment from the sharks.

The two revealed that they were looking for a mentor to help the business expand, and would use the investment to increase international inventory and do more trade shows.

After much deliberation, sharks Glen Richards and Janine Allis teamed up to offer $700,000 investment for a third of the business at 33% equity split between them. This was not without some criticism from Baxter, who said the two sharks for “sitting there and trying to rob them”.

However, one of the biggest deals of the season was made and the two walked away, saying that they “couldn’t be happier”.

This was the final episode of Shark Tank’s second season. The show is set to return for another season, and hopeful businesses can now apply to pitch to the sharks on the show’s casting website.