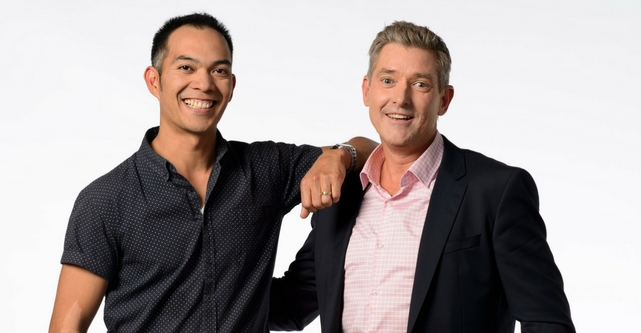 Emotions were running high during the season finale of Shark Tank on Tuesday night, as one entrepreneur Jaypee Abraham secured crucial support from Glen Richards for his family-run coconut health food business Jimalie.

But while the sharks were receptive to Abraham’s pitch, he received a grilling for not knowing his numbers.

Abraham concedes his emotions may have got the better of him, because of the “unnatural” and “uncomfortable” nature of the tank, and says he was “thinking too much about that, as opposed to being with them”.

“While I had my figures it could have been [delivered] a lot better,” he tells SmartCompany.

“I think definitely we were scared, and definitely out of our comfort zone”

On last night’s episode of Shark Tank, Abraham entered the tank seeking $85,000 in return for a 20% stake in Jimalie, which he and his wife created after their son was diagnosed with autism.

Since using the products, which are free of preservatives and over-processing, Abraham says he has seen a 70% improvement in his son’s behaviour.

The sharks were receptive to the pitch, which valued the company at $425,000 and outlined how the products are stocked in 450 stores nationwide.

The business has generated $600,000 in revenue since launching in 2014, but when questioned by the sharks about yearly revenue results and profit margins, Abraham quickly became unstuck.

Abraham admitted that we was “horrible at figures” and needed to “work out” the right margins to be charging.

“There’s no get out of jail free card on not knowing your numbers in business,” Baxter told the entrepreneur.

“No one will ever succeed in business if they leave it [numbers] to someone else. When you read numbers, it’s like reading a book about your business,” Boost Juice founder Janine Allis added.

Fellow shark Andrew Banks similarly had stern words for Abraham: “See that large dark patch: you’re digging a hole for yourself,” he warned.

Glen Richards was the only shark who didn’t see a red flag, instead telling Abraham: “I see this as an opportunity not a problem”.

“They’re beating you up about being a bad businessman, but you just didn’t know your numbers,” he said.

After deliberation with his wife, Abraham issued a counter-offer of a 45% stake for $85,000, but the pair finally settled on a deal that will see Richards claiming a 55% stake in the business three years from the time of closing the deal.

For Abraham, the funding comes at a crucial time for the business: Jimalie had already wound down its operations for a number of months because it had no cash to fulfil its orders, after Abraham and his family moved from Cairns to coastal New South Wales to access autism care facilities for their son.

“In June last year we ran out of cash — we were growing substantially [in Cairns] and … had other forms of income,” he explains.

“When we moved here [to NSW] we had no jobs, and were using the income for the business which was only a year-and-a-half old, which was a mistake,” he admits.

“We looked at the bank account and realised we had no more cash left, and close to $50,000 backorders we couldn’t fulfil.”

Despite these business woes, the deal with Richards passed due diligence in April this year, Abraham says, and the business has brought in its first container of goods, moving 20 pallets of stock in four months.

The company is also set to launch charitable operations from Abraham’s family farm in the Philipines, where the company grows its coconut products.

“Glen came in at a perfect stage where we could give back [through] our charity and grow our business plan,” he says.

Abraham says the plans are “already finalised” and will including building a school for the poor, a Jimalie manufacturing facility, as well as dorms and gym facilities for the nearby villagers employed to work on the plantation.

He says giving back to the local community is “something we’ve always believed in and something my dad always really wanted to start”.

“There was never just a point to do a business and make a lot of money — it’s always been based on something we believe in. That’s what keeps us going,” he says.

“We’re thankful we get paid for doing something we love.”