Shark Tank recap: How the show’s youngest ever entrepreneur Isabella Dymalovski captured the hearts (and help) of every shark 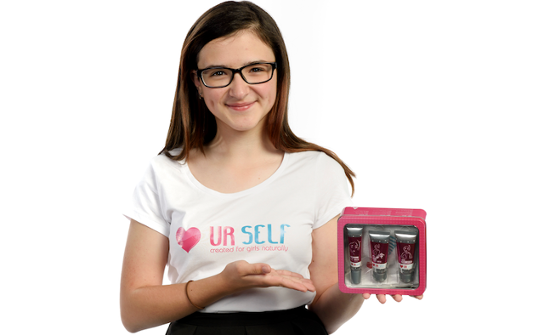 The sharks on last night’s episode of Channel Ten’s Shark Tank were presented with their youngest pitcher yet, 13-year-old entrepreneur Isabella Dymalovski.

And while Dymalovski didn’t manage to land an investment deal in the tank, all of the sharks offered to mentor and help her achieve her business dreams.

Dymalovski’s brand Luv Ur Self is a range of naturally made cosmetics and beauty products, designed to be safe on all skin types.

The sharks loved Dymalovski’s pitch, which was complete with products to try on and a detailed booklet for Luv Ur Self’s financial details.

However, the high-profile investors were ultimately concerned with Dymalovski’s ability to balance school and the business.

“If you were 18 years old and just finished grade 12, I would offer you an investment in a heartbeat, because you are very impressive,” said shark Steve Baxter.

“The problem is that you’ve got four exceptionally important years ahead of you.”

Dymalovski told SmartCompany she believes the pitch went well and says she “wouldn’t change a thing about it”.

“I was pretty pleased with myself, but also extremely nervous,” Dymalovski says.

“I wanted to get investment from Andrew [Banks], as he’s the one with the most connections overseas.”

“These school holidays Izzi is coming into our head office for work experience,” Allis wrote.

Although Dymalovski was a bit disappointed to leave the tank empty-handed, she says she understood why the sharks did not invest in Luv Ur Self.

“I definitely understood, they made some fair points,” she says.

After trying some of Luv Ur Self’s bright green nail polish on the day, shark Andrew Banks has made good on his promise to help Dymalovski, working to get Luv Ur Self products into retail stores across Australia.

The brand is now sold in more than 370 Priceline stores across Australia.

The sharks have also helped Luv Ur Self’s marketing efforts, setting up a marketing team so Dymalovski can devote more time to school, although Dymalovski’s plans for overseas expansion to both the US and Europe will likely keep her busy. .

Following last night’s pitch, Dymalovski says both her and her products have recived a huge amount of interest, though she did try to keep her Shark Tank appearance “on the down low”.

Luv Ur Self has been Dymalovski’s project for the past five years, after she came up with the idea thanks to her weekly dance classes.

“I used to do a lot of dance concerts, and they required us to use makeup,” Dymalovski says.

“Mum told me I couldn’t use her makeup removal products because they contained too many chemicals, and she told me to go make my own.

“I don’t think she realised how seriously I took that.”

Thanks to her mother’s chemist friends, Dymalovski was able to create an early prototype of her product, which she says made her school friends envious.

“I showed it to people at school and they were all like ‘This is so cool, where can I buy this?’” Dymalovski says.

“I told them that you couldn’t buy it anywhere, and that’s where the business idea came from.”

Luv Ur Self’s early products were made from the same ingredients they are today: natural ingredients including herbal extract Plantolin.

The range is also one of the few cosmetics and skin care product ranges in the world designed specifically for ‘tweens’ or youths between the age of 8 and 14.

Luv Ur Self also produces a range of accessories, such as brightly coloured shoelaces and glow-in-the-dark nail polish.

Despite her experience in running Luv Ur Self, Dymalovski is unsure if she wants to study business in year 11 and 12.

“I’m not really sure, it’s a pretty long time until I have to think about that,” she says.

For entrepreneurs of any age, Dymalovski has some advice for starting your own business.

“In our meetings, people would usually direct the questions to my mum, who’d say ‘I have no idea, ask her’” she says.

“I had to prove that I knew all about the business, so it was hard trying to get over that barrier.

“The whole thing has been a challenge and an experience, and the key thing was to keep trying and persevere.”

Catering company YouChews also walked out of the tank with a deal, securing a $125,000 investment from Steve Baxter for a 12.5% equity stake.