Landing a coveted spot on an episode of Channel Ten’s Shark Tank can open businesses up to hordes of hungry customers, who keen to check out whatever product entrepreneurs are spruiking for investment.

This prospect may daunt some SME owners but co-founder of clothing brand Kaf.Tanned Jade Castle is fully prepared, telling customers to “bring it on”.

Castle and her business agreed to a $50,000 investment on last night’s episode of Shark Tank, handing over 25% of her business to shark Steve Baxter, who also offered her the potential for a $100,000 loan.

Kaf.Tanned is a manufacturer and retailer of garments designed to be worn after getting a fake tan, with Castle telling SmartCompany her years working in a tanning salon meant she had seen too many customers come in “inappropriate or daggy” clothes, and their tans had suffered because of it.

“At the time no one was offering a stylish tanning dress, so I created my own design, worked on it for a couple of years, and then launched it in 2013,” Castle says.

“We provide salons with these garments for customers to wear post tan, and they’re both fashionable and affordable.”

While seasoned tech investor Baxter might not be the obvious choice for a business like Castle’s, the shark was the last one left after his four fellow investors opted out. Castle initially sought a $150,000 investment for 10% of the business, valuing it at $1.5 million. However, the sharks thought the valuation was too high and suggested the proposed growth of 50% each year was unrealistic.

“You’re impressive, but you’re not that impressive,” Baxter said in the episode.

Despite some fiery back and forth, Baxter ended up making an offer for a stake in Castle’s business, coming in a good deal lower than her initial proposition. The deal is still in the final stages of due diligence, but Castle says working with the Brisbane investor has been “awesome”.

“We’re still talking about a few things and getting all the paperwork done, but Steve’s just down the road if we ever need to pop in and have a chat,” Castle says. 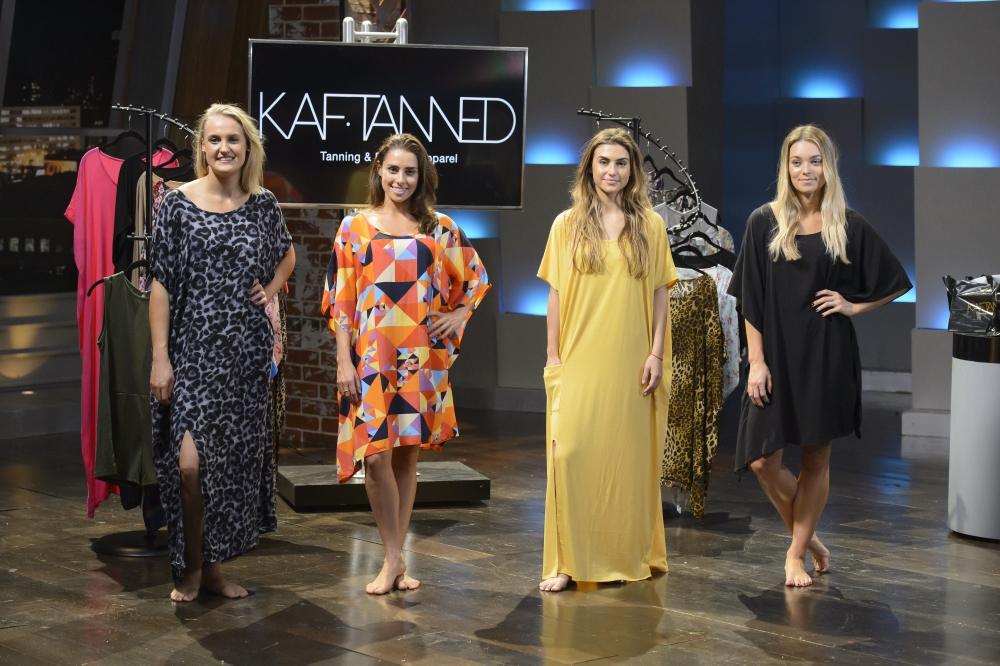 The entrepreneur only just made the cut for this season of Shark Tank, having sat on the fence about applying until the very last day applications were open. On the day of filming, she was “so nervous” being the last one to enter the tank, but says the entire experience was a fantastic way to bolster her entrepreneurial skills.

“It was a great experience both work wise and personally, but it was also the biggest thing I’ve ever had to do. I had to step up and complete it, and through that, I’ve gained loads of confidence and entrepreneurial skills,” she says.

Castle was surprised to land a deal with Baxter, though admits she would have been happy to do a deal with any of the sharks, and says she believes it was more about her as a person, rather than her business.

“It’s not always about the business, as the sharks want to get to know you as well, and they ask a lot of questions,” she says.

“They see you and they read you. It’s about you as well as the business.”

Kaf.Tanned’s products can be offered anywhere in the world where there are tanning salons, and Castle’s plan is to get international expansion underway. The brand already has a handful of stockists in the UK and is “in the middle” of setting up a number of distribution deals, along with plans to attend a number of expos.

As the business waits for the deal with Baxter to be signed off on soon, Castle reflects the experience has been a boon to her development as an entrepreneur, recommending any other aspiring business owners “dive in”.

“Take all the advice you can get, good or bad, and use it to the best of your potential,” she says.

“You’ve got to give it a go because otherwise, you won’t learn.”

Have you done a story on Cellarwraps, Great story and product?