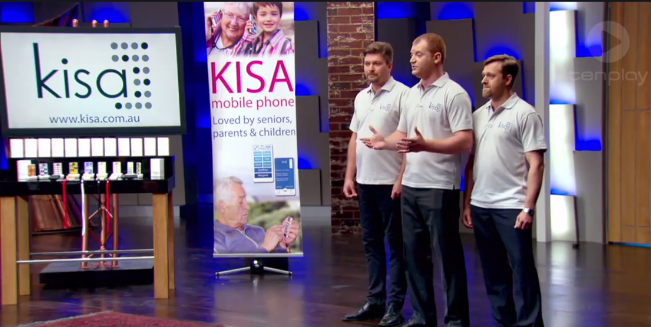 Two Ukrainians and a Russian walk into a room.

No, it’s not the beginning of a bad joke, but the reality on last night’s episode of Channel Ten’s Shark Tank.

Dmitry Levin, Dennis Volodomanov and Leon Kosher are the founders of KISA, an easy to use phone aimed at the elderly and young children.

They appeared in the tank last night, seeking an investment of $200,000 for a 5% equity stake in the business. The trio told the sharks the business had recorded $310,000 in revenue over the previous 12 months, with cost of goods sold coming in at approximately $130,000.

After also receiving offers from Janine Allis and Andrew Banks, the team accepted an offer from Naomi Simson for $100,000 investment for 10% of the business, plus a $100,000 loan.

KISA is a phone that eschews the typically touchscreen interface of a modern phone, instead opting for an entirely tactile, button-based interface.

The product is primarily aimed at older users, who want simplicity, and might find touch screens confusing and hard to use.

On ordering the product, the consumer can pre-select up to 10 contacts to be displayed on each button, either with a name or a photo.

Speaking to SmartCompany, Levin said the inspiration for the phone came years ago, when his wife’s grandfather got lost on a walk and was uncontactable.

“In 2009, my wife’s grandfather went for a walk and got lost. Even through he had a smartphone, he was unable to properly use it and there was nothing we could do,” Levin says.

“Thankfully a good Samaritan found him and gave him a lift home.”

After finding no phones on the market that did what Levin wanted, he teamed up with Volodomanov and Kosher to create the KISA phone, which they launched four years later.

“Starting up, it was a very steep learning curve, we were doing something no one had really done before,” Levin says.

“People didn’t understand what ‘simple’ really meant, and we had a lot of people asking us why we didn’t just put a screen on the phone.” 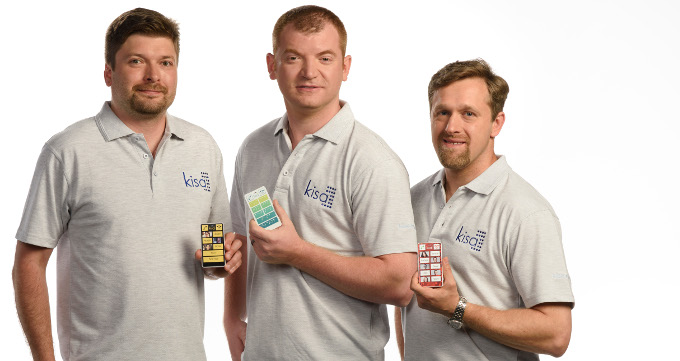 The team appeared on Shark Tank with the first edition of the phone, and in the time since, KISA has rolled out a second edition with more features.

Levin says the second edition is “massively improved” with GPS functions and the ability for it to be controlled by family members remotely.

“Say if your grandparent has turned the volume all the way up and can’t turn it down, you can now log in on our website and turn it down for them, from anywhere in the world,” Levin says.

“The GPS can help if they get lost, or as a way to keep track of your kids during the day.”

Although the KISA phone may look simple, Levin assures its looks are deceiving, as under the simple exterior, the guts of the product are “all smartphone”.

The team moved away from the basic chipset used in their first model, opting for an Android chipset instead.

“The new KISA is essentially just like any Android phone, except without a screen,” Levin says.

“We needed a chipset that was capable of doing everything we wanted it to do.”

The team of three are all split up into different roles, with Levin managing sales, Kosher the “numbers man”, and Volodomanov developing the device itself.

Levin says having the two other founders with him in the tank was essential, saying, “I would not have been successful by myself.”

“We prepared so much that when we walked in there was nothing that could go wrong, [Kosher] knows his figures,” Levin says.

“You have to have bright people around you to succeed.”

Levin says the starting point for their pitch was not what they expected to get from the sharks, saying businesses should “never expect to get what you ask for initially”.

Simson’s offer hit the nail right on the head, according to Levin, saying it was as if she knew exactly what the company was looking for.

The deal made is out of due diligence and is well underway, with Simson having a direct involvement with the business.

Levin says the second model of the phone is only possible because of Shark Tank, and working with Simson has been “incredible.”

“I can’t imagine how people do deals with multiple sharks, everyone has their own personality and agenda, I think I would have found it very difficult,” Levin says.

As for the future of KISA, Levin says overseas expansion is definitely on the cards.

“We’ve got a KISA phone in every continent bar Antarctica, and we’re working on that,” he says.

“The most obvious areas for expansion are the US and Europe, but we’re approaching that with caution.

“There’s a lot of complexity involved, and we want to make sure we’re providing a holistic solution.”

For other businesses hoping to swim with the sharks, Levin says you should always focus on what you know.

Also walking out of the tank with a deal last night was drinks brand Sofi Spritz, which made a split deal with Steve Baxter and Glen Richards of $130,000 for 10% equity.