Sneaky tactics and 6am starts: How the founder of Lonely Kids Club built a thriving ethical clothes brand 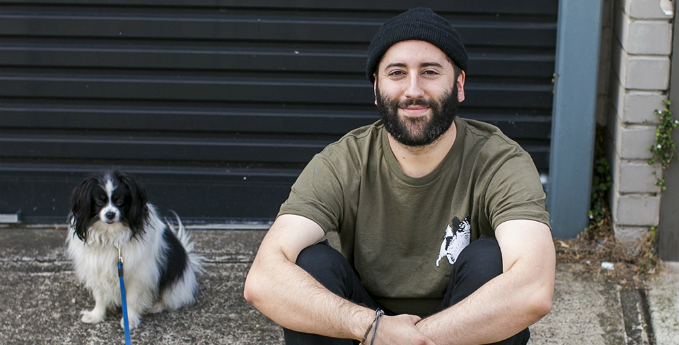 On his own admission, Warwick Levy did a lot of sneaky things to try and make his ethical clothing brand a success in the early days.

“I used to sneak into fashion shows I wasn’t invited to, or sit outside local gigs with big tupperware containers full of my clothes just so I could flog them at cost price,” the founder laughs.

Levy’s business is Lonely Kids Club, a mid-sized ethical fashion brand run out of Sydney, with a passionate caste of online followers drawn to the brand’s wellbeing-conscious and wholesome line of products.

But back in 2011, the brand was still in its infancy and the founder was struggling to gain notoriety. Deciding all he wanted to do was to “make t-shirts and sell them”, Levy dropped out of his construction degree and threw himself into the business despite scepticism from his friends and family.

“People told me a career in fashion wasn’t a possibility, but I decided to do it anyway. I dropped out, learned how to make t-shirts, and found an artist I really liked in Melbourne,” the founder says.

“I lived with him in a shed for a week, and during that time we made the first batch of Lonely Kids Club designs.”

Despite the name, Lonely Kids Club’s customers aren’t for the most part attention-deprived teens, and Levy says the name isn’t intended to invoke any feelings of desolation. It originated from a personal joke between him and a friend, and Levy just decided to roll with it.

“For me, the name also represents putting creativity and happiness above societal norms,” he says.

But despite his determination, persistence and guerilla marketing tactics, Levy says for the first two or so years, the brand was “more or less a failure”.

“I did everything I could, and I was very persistent and determined to make something work. And though everyone said to me it was never going to go anywhere, I kept hustling,” he says.

“That meant going to the markets at 6am and selling my clothes at cost-price literally just so I could make more.” Some of the Lonely Kids Club range.

With the constant hard work and hours being poured into Lonely Kids Club, it’s almost cruel the thing that kickstarted the brand’s success was something entirely out of Levy’s control.

About two years in, Levy started making jumpers with small cartoon sloths on them — a novel product at the time but now a mainstay of the clothing brand.

“Someone bought one of them independently, posted it on a Facebook group, and it went viral after that,” he says.

The rest, as they say, is history. Levy’s business continued to grow off the newfound attention the post had given the brand, and today the business has a physical store, 50% year-on-year sales growth, and even one employee.

The business is now Levy’s full-time job, something he’s only been able to do in the last couple of years, having had done freelance e-commerce and design work on the side before that.

“It’s been so fantastic and such a great opportunity for me. I still have people from seven years ago buying the clothes, and I think that’s because a lot of the growth for the business has been through word-of-mouth,” he says.

“It helps we’re making really good quality clothes ethically, which is something a lot of other clothing brands don’t do.”

Just this week, Lonely Kids Club dropped its latest range of t-shirts and sweatshirts, each with a focus on self-care and mental health, which Levy says has been a longstanding focus of the brand.

Lonely Kids Club has released a number of products with a strong focus on wellbeing, but this range is a bit different, as a cut of the profits is being donated to local mental health charities.

Levy says his own struggles with mental health issues over the years contributed to his desire to create clothing which could create change and says the first concepts for the products came together when he and an artist friend were sitting around talking about how they were feeling.

“We were talking about how we were feeling and how neither of us really felt okay at the time, but that was okay,” he says.

“We decided to make patches with mental health messages, so if you were sitting opposite someone on a train and you saw them with a patch that said ‘it’s okay to not be okay’, you could start a conversation about it.”

“Not only were they extremely popular, but I felt I was making a real difference when selling them. The more we did it, the more people messaged us and told us how much it meant to them.”

In the end, Levy says that’s his goal: to do something bigger than just make and sell t-shirts by making things that connect with people and make a positive difference. But before that happens, the founder says he needs to practice what he preaches and keep his own mental wellbeing in check.

At the time of speaking to SmartCompany, Levy was just days away from his first holiday in years and looking forward to being able to turn off for a while, a concept foreign for him in Lonely Kids Club’s formative years.

“Mental health has been a tough one for me, and that’s probably why it’s reflected so strongly in the brand. It’s really challenging working for yourself with no boss telling you what to do, and what you’re doing right and wrong,” he says. “I get very bogged down in monitoring sales, so it’s been a tough journey for me recently to take a step back from that and enjoy life a bit more. I want to look back on my 20s and say I enjoyed it, rather than think about that time I missed out on $1,000 of sales.”

Levy says the personal nature of the brand means he feels personally responsible if a line or release doesn’t go as successfully as planned. He says he’s planning to separate from the brand a bit, just to avoid being so “tightly ingrained” in the future.

But it’s that same integration on a personal level which allows Levy to respond so quickly to what customers want, such as a few weeks ago when he released a line of pyjamas seemingly on a whim after customers called for them on the brand’s Facebook page.

Looking to the future, Levy says he’d like to see the brand head international and start selling into places such as America and Canada. Along with that, he wants to see Lonely Kids Club get larger so he can hit the minimum orders for more niche product lines, such as backpacks.

“I’m very transparent and honest about what I’m doing, and I really believe in the messaging I’m pushing, so I hope people understand it comes from a place of sincerity,” he says.

NOW READ: A simple recipe for success: How Will Sked’s leather goods brand Status Anxiety carved out its own niche

NOW READ: How this entrepreneur created a $10 million clothing brand by targeting the “forgotten man”