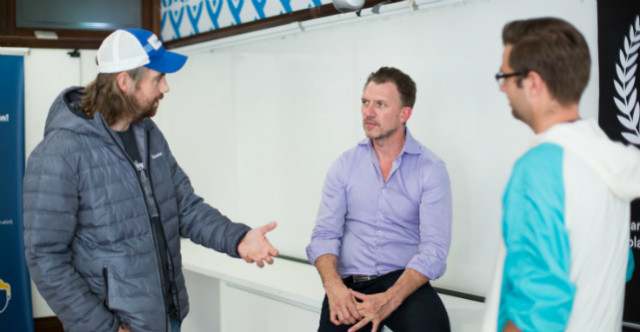 He got a call from his dad saying his grandfather had passed away. Distraught, McEvoy quickly jumped on a plane, but realised he couldn’t afford a return trip.

“I got home sad that my grandfather had passed and realising I was broke,” McEvoy says in a recent AMA run by Blackbird Ventures.

Booking Angel, the startup the founder was working on at the time, had also just “failed”.

“Even worse, a deal I had been working on for a year actually came through but I didn’t have a cent to my name to actually implement it,” McEvoy says.

This was when McEvoy hit rock bottom.

“I was sitting on a beach in the south coast at night not knowing what I was going to do,” he says.

“I hadn’t had a job in six years, didn’t know what I was good at and had to move back in with my parents at 32.”

It was his partner at the time that gave McEvoy a “little nudge” in the direction that brought him out of this rut.

“She kicked me in the butt and told me to stop feeling sorry for myself,” he says.

“That starts the momentum you need to get moving.”

The next day, he visited Pollenizer and discussed implementing the deal that had just closed, and moved into a friend’s spare room. Things were starting to pick up.

Two years later, Spreets would be sold to Yahoo7 for $40 million in one of the biggest Australian tech deals of all time.

“It taught me no matter how much it hurts getting punched in the face for the 20th time, just get up – no excuses,” McEvoy says.

After the hugely successful exit, the serial entrepreneur has now turned to a new and lofty goal: to transform Sydney into one of the top 10 tech ecosystems in the world.

To do this he helped launch TechSydney, a tech supergroup of sorts featuring some of the biggest names in startups.

It’s all about giving back to the community and helping to build a better quality of companies, McEvoy says.

“I have suffered through enormous difficulties as an entrepreneur since I launched my first business in 2001,” he says.

“It’s just human nature to not let others who walk behind you make those same mistakes. TechSydney is an extension of that.

“It’s helping entrepreneurs grow their companies and avoid the pitfalls.”

In the Q&A session, McEvoy also dished out a number of useful lessons and takeaways for other founders and entrepreneurs.

The importance of diversity

The launch of TechSydney was somewhat overshadowed by its stark lack of gender diversity, with only seven of its initial members being women.

But McEvoy says he learnt a valuable lesson from the criticism.

“I learnt my lesson that you have to proactively portray an inviting and inclusive environment so women feel comfortable participating,” he says.

“It wasn’t planned but the backlash was in a way good. The gentle kick in the butt I needed to make sure I think about how things are perceived in the future.”

He says that he has seen first-hand the importance of diversity in startups and the tech world.

“The reason that drives me to improve it the most is it will produce better companies with bigger impact if we get it right,” McEvoy says.

“I have seen in my own company when you get different perspectives on problems you get better results. There is also a certain kind of energy you get with a balanced gender group in a room.”

How to jump into the startup world

McEvoy says there is some required reading for hopeful startup founders, including The Lean Startup, fi.co and Sam Altman’s writing. But for the most part, you can only learn by doing.

“Learning about startups is like learning to dance,” he says.

“You can read about it, you can get strong and flexible but eventually you’ve gotta put the music on and startup moving.”

With a mission to put Sydney’s startup ecosystem on the world stage, McEvoy says there’s one big advantage: “The resilience of our founders”.

“We haven’t had the history of $1 million seed rounds to build an MVP [minimum viable product] – we have to save up, borrow, beg and scrape our MVPs together,” McEvoy says.

“My analogy is always that Australia for the last 10 years has been like trying to grow a plant in a dark cupboard. Many don’t try, many die, but those that survive have evolved to by much more resourceful.

“When we have a great VC industry, when we have support like TechSydney and at a time when global markets are capitulating, I think Australian startups are going to outshine the rest of the world in no time. It’s going to be awesome.”