Thankyou Group co-founder Daniel Flynn has been paying close attention to the price of nappies and it’s not just because the social entrepreneur is a new dad.

Flynn, along with co-founders Justine Flynn and Jarryd Burns, was on Wednesday night celebrating the launch of the Thankyou Group’s range of baby care products, which includes nappies, body wash and shampoos, which will fund child and maternal health care projects around the world.

The new range was made possible after the group raised $1.4 million by asking supporters to pay what they want for a book earlier this year, with some of those funds also going towards Thankyou’s expansion in New Zealand.

While Thankyou Group already has runs on the board when it comes to selling its water, food and adult body care products in major retail chains, Flynn said in Wednesday he was warned by numerous players in grocery sector that the chances of being able to successfully launch a new nappy brand in Australia are slim.

In fact, he was told of global corporations making multiple attempts to launch new nappy brands across the country and failing, and of the “billion-dollar companies” that would create tactical teams to respond to the launch of Thankyou Group’s range.

He was told these same companies would slash the prices of their nappies in the weeks prior to Thankyou’s launch to encourage shoppers to stock up on the specially priced products so that by the time the new brand hit the grocery shelves, they wouldn’t actually need to buy new nappies.

Armed with this knowledge, it’s not surprising then that Flynn and his team have been keeping an eye on any movements in nappy prices.

But despite admitting the launch of Thankyou’s baby range is a “huge risk”, Flynn says he is convinced the range will be a success, given its focus on high-quality products for families and the potential social impact it can create.

“When we started Thankyou, we realised that if the product isn’t awesome, I think most of us will buy it once or twice because of the good cause but then we’ll go back to what works for us, what we love,” he said.

“So at Thankyou, the key to success is … making sure the product is as good as competitors and it’s got to be better.” 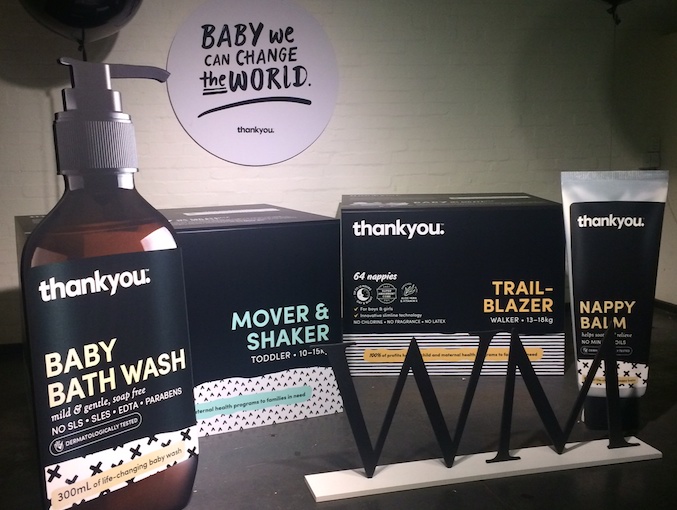 The 14-product Thankyou baby range is now available from major supermarkets Coles and Woolworths, as well as retailers such as Priceline, Baby Bunting and independent grocer La Manna. Representatives from Coles and Priceline attended the launch event on Wednesday and Flynn paid tribute to the support they have shown to Thankyou Group.

All the profits from the Thankyou baby range will go towards funding child and maternal health care programs for people in need.

“Right now, every 103 seconds a mother dies in pregnancy and childbirth, and globally 2.7 million babies don’t reach their first month of life because they don’t have access to basic health care,” Flynn said in a statement this morning.

“At Thankyou we believe it’s possible to lower that statistic and quite literally save the lives of mother and babies through this range.”

If the range is successfully, Flynn predicts it will help Thankyou more than double the amount of money it has given to projects around the world since 2008 from $4.7 million as of this month, to more than $10 million by the end of the 2018 financial year.

Not content with simply launching another range of consumer products, Thankyou Group unveiled plans on Wednesday to create an online community for parents looking for support and inspiration.

The social enterprise has acquired online magazine Wonderful Mama, which was founded by editor Emma Stewart just over a year ago.

Wonderful Mama is now ‘a Thankyou community” and as a social enterprise itself, all the profits from its advertising and commercial partnerships will also go towards funding child and maternal health programs.

Speaking about how the acquisition came about, Thankyou Group co-founder Justine Flynn said on Wednesday Thankyou was searching for a way to create a platform “so that we can encourage mums and parents to encourage one another and inspire one another”.

“I really do feel that in Australia there is this mindset that in order to get ahead, we need to pull down, that we need to find the faults in those ahead of us,” she said.

“But I believe that how we really get ahead is … by lifting others. We rise by getting along and championing others’ success.”

Flynn said as the Thankyou team was exploring ways to create this kind of online community, “we saw this other great woman who was doing this already,” she says, referring to Stewart.

“We realised we don’t want to compete with this, we actually want to get alongside and champion her.”

I have no need of the baby products, but I love their washes and hand creams. Good to see a social enterprise such as this doing well.