A founder of one of Australia’s most prominent startup success stories says the local entrepreneurship landscape is very different now to what it looked like eight years ago.

Justine Flynn is the co-founder of social enterprise retail startup Thankyou Group, and says a decade ago the business would have been called something completely different.

“When we started in 2007, a “social enterprise” wasn’t even a thing,” Flynn told SmartCompany.

Her decision to step out and start her own company was met with confusion from family and friends, a move that wouldn’t turn heads today.

“It was a really foreign thing to step out and start your own thing, I think a lot of people thought I had lost it a bit,” she says, reflecting on the journey of the company during Global Entrepreneur Week.

Read more: Thankyou Group’s Daniel Flynn wins emerging entrepreneur award: “I was just a kid who got an idea”

These days Thankyou stocks over 40 products in retailers across the country, and has contributed over $4.8 million to social enterprise projects in 16 different nations. Despite its rapid growth and widespread success, Flynn still considers the business a startup.

“In a lot of senses we still are a startup, but at the same time as we scale, we’re seeing growing pains. We’re experiencing a lot of common problems with such fast growth, like hiring the right talent,” Flynn says.

Support a key to success

Maintaining the social enterprise angle while growing so fast can be difficult, but Flynn notes that Thankyou’s business model lends itself to sticking to these goals.

“We’re a for-profit business but we’re owned 100% by a charitable trust, and we have commitments that we make to them. All of our hiring and marketing decisions are based on the core of what we do,” Flynn says.

“Even from the beginning we realised you don’t necessarily need $3 million to do a national marketing campaign, we just got creative and thought outside of the box,” she says.

“If we were just thinking about our budget, we never would have gotten any ideas, and then how would have we grown?”

Flynn’s role in the business has changed though, noting that she’s less “hands on”.

“I’ve stepped back a bit now, and now other people who have come on for the journey are stepping into new roles.”

Thankyou is powered by not just the entrepreneurship of the founders, but by the ongoing support from consumers and suppliers, which Flynn says have supported the business “in one way or other”.

“Thankyou is where it is today thanks to everyone who got on board, from our suppliers to our customers, they’ve jumped on and used their spheres of influence to see our idea become a reality.” 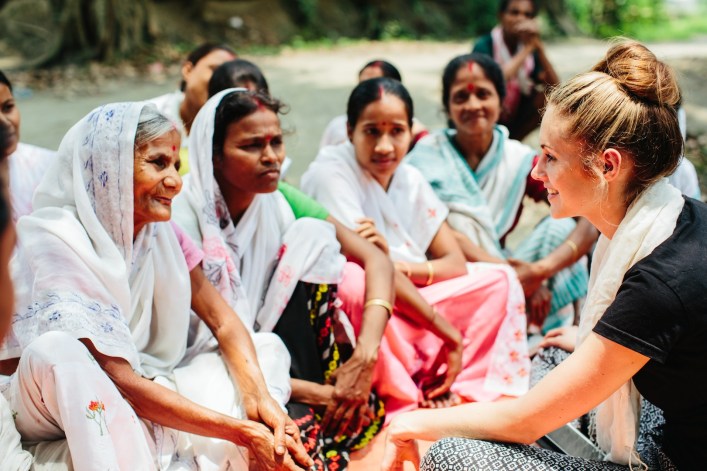 New Zealand a “graveyard” for Aussie brands, but entrepreneurship is booming

Thankyou’s influence with social enterprise projects may span across 16 different countries, but for now, the products have only been sold in Australia.

Flynn and her team have begun to launch in New Zealand, and despite many warning them about the risks, company has done its research.

“We’re currently launching in New Zealand, even though some have warned us against it, they say there are bigger markets to grow into,” Flynn says.

“We know it’s a huge risk, and New Zealand is known as the graveyard for Australian brands, but we’ve seen that the New Zealand community and culture will take Thankyou on board.”

“Something I’ve seen in Australia and New Zealand is that there’s a real thirst for more, clearly we love to bat above our weight as smaller countries because we’re always thinking bigger,” Flynn says.

“In my perspective, something I’ve seen a rise in is a number of workshops for entrepreneurs. Also, there’s a lot more empowering happening, especially for women.”

Early struggles happen to everyone

Thankyou’s founders started out with a vision and struggled early on to turn that vision into a successful social enterprise.

Co-founder Daniel Flynn told SmartCompany in August that the three would wear their parent’s suits, and take the P-plates off their cars to seem more professional, but Justine says the real story could be seen by looking at his shoes.

“Our first year we made $7000 in profit, and only because we weren’t taking any wages. The next year we made $200 more than that, and we wondered if it was even worth it,” she says.

“Our founder Daniel was walking around Melbourne with holes in his shoes.”

Flynn believes that difficulties facing entrepreneurs early on are not exaggerated and that she and her co-founders were optimistic, despite what people told her.

“When people were telling us the difficulties of starting a business we were really optimistic, so the realities hit us pretty hard. How hard it would be, how long it takes, I don’t think any of that stuff is exaggerated,” Flynn says.

“Everyone has different challenges, the level of difficulty is different for everyone. It took us 3-5 years to get off the ground properly, we were all still at uni and working part time jobs, so for us it was extremely difficult.”

The best thing entrepreneurs can do is to not compare your business to others, Flynn saying that if Thankyou had done that, they would have been discouraged very early on.

“For entrepreneurs, the best thing to do is not to compare yourself to others. You won’t get any benefits from comparing, just stick to the wins you have now,” she says.

“Stop looking at where you’re not, and look at where you are. It’s better if you can think about what you’ve achieved today and think, “that isn’t so bad”.”