Meet the founders of The Seltzer Store, a homegrown e-commerce platform taking advantage of a global alcohol trend

Christian Howard describes a “perfect storm” of events that created an opportunity to launch his new business with his wife Alex.

The New South Wales couple are the founders of The Seltzer Store, an online-only retailer that exclusively sells a new category of drinks taking off in Australia: hard seltzers.

Launched in mid-September, the e-commerce store is targeted firmly at social media savvy millennials who are taking to seltzer drinks in droves, spurred on by a rapid rise in popularity in North America.

In the US, the name ‘seltzer’ generally refers to sparking water, and ‘hard seltzers’ are those with alcohol added. This could be vodka, gin or tequila, with some seltzer brands using fermented grains or cane sugar as an alternative.

According to Nielsen research, drinkers in the US dramatically increased their spending on seltzers last year, with the category attracting US$2.7 billion ($3.7 billion) in sales.

Hard seltzers have been around for some time, but the category now accounts for 10% of the beer and cider market in the US, according to Neilsen, with newer brands such as White Claw and Truly making their market with fresh, summer-inspired marketing campaigns.

Businesses in Australia are now taking note — from small operators such as The Seltzer Store to big players including Dan Murphy’s and BWS.

Pitched as a lighter, healthier alternative to other drink categories such as wine and cider, seltzer brands are now finding space on bottleshop shelves around the country.

Speaking to the ABC, Andrew McCrae, category manager for pre-mix drinks at Dan Murphy’s, said the retailer is predicting hard seltzer consumption to take off in coming months.

“We have seen a 230 per cent increase in seltzer sales in September compared with August. With every week we beat the sales form the week before,” he said.

“I think the awareness around the category was low in the past and that is changing now as more products come to market.

The Seltzer Store currently stocks about 15 brands, and Howard expects to add to that number again next month.

The store specialises in Australian-made seltzers, from Tidal Seltzer made on Victoria’s Mornington Peninsula, to Delvi Alcoholic Sparkling Seltzer, which is made from locally sourced organic products near Byron Bay in New South Wales.

It’s a conscious decision by Howard, who says The Seltzer Store is “piggybacking” off the efforts by larger alcohol retailers to get in on the space, and on the content being produced by seltzer brands themselves.

“We’re in this perfect position with the big guys spending all this money on educating consumers,” he tells SmartCompany.

“It’s been really good in the sense that we’ve been able to support a lot of small, family-owned and independent little guys, a lot of which are not going to have the same exposure to the big guys,” he says.

The Seltzer Store is aiming to combat the larger players in the market and is using clever digital marketing tactics to do so, with Alex Howard managing the store’s e-commerce platform, SEO and social media advertising on Facebook and Instagram.

It looks to be paying off for the brand new business, with Christian Howard saying the first month’s sales have been “a lot higher than expected”.

“We probably expected about a quarter of the sales so far,” he adds.

The target market is 25–35-year-olds, Howard explains, and about 60-70% of seltzer drinkers are women, which is reflected in the store’s orders so far.

The Seltzer Store sells the drinks in four-packs, as well as larger quantities, and offers the abilities to order packs with an assortment of brands.

“It’s not cheap, so it doesn’t appeal to the really young guys who are just looking for cheap booze,” he says.

The most popular item in the store is a 24-can mix pack of different seltzer brands, currently priced at $129, which Howard says is “flying out the door”.

“People are willing to spend the money on it,” he adds.

On the one hand, it means shoppers who are looking for the “freshest, coolest brands” can lock in deliveries and trust The Seltzer Store to do the research, and then deliver on it, for them.

And on the other, if someone “falls in love with a brand”, it’s a convenient way to make sure they’ve got a regular supply arriving on their doorstep.

“It’s about having a platform that’s not stale,” he says. 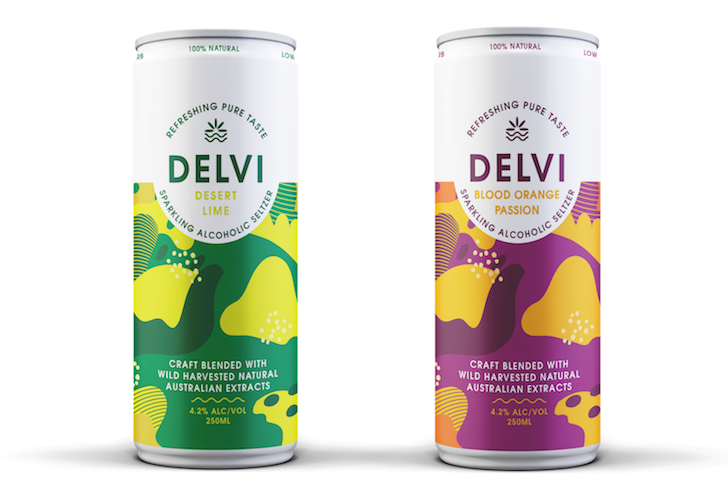 Delvi is one of the Australian seltzer brands sold by The Seltzer Store. Source: supplied.

But there’s more to this business opportunity than simply selling a new kind of alcoholic beverage, Howard says.

There are structural forces that make it a smart time to launch an e-commerce business, backed by social media marketing, he says.

“No one has ever spent as much time on social media, no one has ever been as comfortable having things delivered to their house, we’ve never had so many courier options,” he explains.

Based just south of Byron Bay, Howard says he and Alex had long wanted to start a business that combined his years of experience in the liquor industry with her digital know-how.

“I’ve always wanted to jump on board with something doing really well in America that hasn’t taken off here yet,” he says.

The pair was also looking for a product that didn’t need to be cold-shipped, and was light; seltzers generally come in 250ml cans, and therefore fit this bill.

And then there’s the associated health messaging around the drinks, which are billed as being low in sugars, calories and carbohydrates.

“I’ve watched the craft brewers trying to push low-carb, no sugar for years, and kind of failing it to be honest,” Howard says.

“We think we can really snap up that health-conscious market.”

The arrival of hard seltzers in the Australian alcohol retail market is exciting, says the business owner, who predicts other categories might fall by the wayside.

“It will kill cider sales. Cider is too sweet; no one is going to buy cider,” he says.

“I think it’s going to put a lot of pressure on those spots in bottleshops.”

Howard describes The Seltzer Store as a “culmination” of a few months trying and testing different models, and says “it’s been a wild ride” to get the business up and running.

But rather than hindering their plans, he says the coronavirus pandemic has helped create the opportunity to turn their business dreams into reality.

“I think it’s helped in the sense that, especially in Melbourne, a lot of people in lockdown can’t go out and try these things in bars, or pick up a case from their local bottleshop,” he says.

“Overall, people are spending more time on social media, which is definitely in our favour.

“It’s that perfect storm,” he adds.