ACCC to crack down on credit card surcharges from September, but SMEs will have 12 months’ breathing room 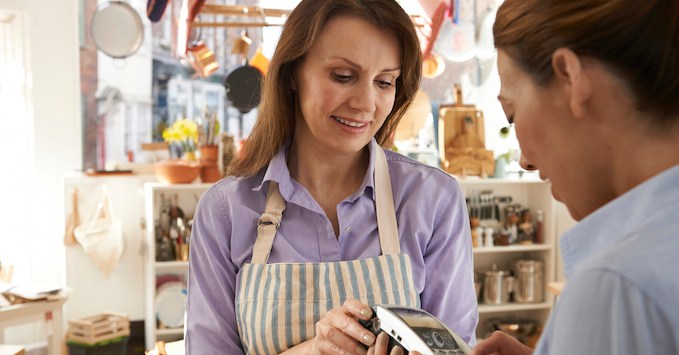 The Australian competition watchdog will crack down on big businesses passing on excessive credit card surcharges from September.

However, smaller businesses have an extra 12 months to make sure they are compliant with changes to how surcharges can be added to card transactions.

Under the new guidelines, unveiled by the Reserve Bank of Australia yesterday, retailers will not be able to charge customers for using eftpos, visa, debit and credit cards at a rate that is more than what it actually costs to process the payment.

“Merchants will not be able to impose high fixed-amount surcharges on low-value transactions, as has been typical for airlines,” the RBA said in a statement.

The Australian Competition and Consumer Commission will be in charge of enforcing the new rules.

It will start cracking down on excessive credit card surcharge practices from September, however there are exceptions.

Businesses that are not ‘large merchants’ will be exempt from the rules until September 2017.

A company is considered not to be a large merchant if it turns over less than $25 million, employs less than 50 people or its consolidated gross assets are worth less than $12.5 million.

ACCC chair Rob Sims said in a statement the changes will result in a fairer system for everyone.

“In short, the new provisions will limit the amount businesses can surcharge customers for use of payment methods such as most credit and debit cards,” Sims said.

“The limit will be linked to the direct costs of the payment method such as bank fees and terminal costs. We will focus on education and awareness in the early stages but won’t turn a blind eye to possible breaches, particularly for those large businesses clearly on notice of these changes.”

Excessive fees are not in the “business or consumer interest”

Christopher Zinn, spokesperson for the Surcharge Free campaign – a group of retailers and associations opposed to credit card surcharges – told SmartCompany yesterday’s announcement is a step in the right direction.

“It’s fair enough that businesses are free to surcharge to recover their costs,” Zinn says.

“But if surcharging were to become the norm and totally normalised, we don’t think that’s in the business or consumer interest. Even if it’s a small amount – we’re talking 1% or 1.5% – when it comes at the end of an experience at, say, a restaurant, there is real potential to leave a bitter taste in the mouth of consumers.”

Zinn hopes the updated guidelines will reward retailers who are already not passing on excessive credit card fees by creating an even playing field.

“You might get a small, instant return [with an excessive fee], but that might come at the cost of customer loyalty and experience,” he says.

The small businesses are not the culprits here, they need to go after the Airlines who charge ridiculously high surcharge fees, the TELCO’s who are also significantly higher than the small local restaurant trying to make ends meet.

Agree, small businesses don’t usually charge credit card surcharges. Airlines are notorious but will this ruling also affect “service charges” such as those charged by Webjet and Wofif etc. They seem to have moved to that model to avoid charging credit card fees and therefore avoid getting caught up in this ruling and will the others just call them “service charges”?

Cathryn B
Reply to  Mike

You can add parking facilities to the list, last week I paid an extra 54c cc surcharge on an $18 charge.

Interesting. Given that all the banks have varying merchant rates, how is the ACCC going to police the fact that Bank A’s merchant fee is 1% higher than Bank B? Merchants from Bank B would be above the threshold. Nice that they are focusing on Airlines as the CC surcharge issue is huge. We (www.Future.Travel) built our site on transparency so there are no credit card charges associated with a transaction for buying airline tickets online with Future.Travel regardless of your country of purchase.

We see no reason why airlines or other OTA’s would need to charge a fee for using a credit card if the business collection system is structured correctly. At the end of the day if a consumer is paying cash or using a credit card the funds end up with a merchant. Why ‘trick’ a customer with false hopes of something cheap (airlines: extra fees, baggage fee’s, credit card fees, choose a seat fee….etc…) when being upfront and honest pays long term dividends?

CabCharge is currently still imposing an exorbitant 5% surcharge in NSW after the ACCC forced it to stop charging 10%.

Will this ruling see it drop immediately to the actual cost, which is probably under 1% for such a behemoth, or will they pretend to be an SME and continue gouging passengers for another year?

You can just increase the price and do not charge credit card fees. And you get a higher margin if the customer pays in cash. Or offer a discount for paying in cash.

The issue with that approach is if they increased prices, then their tax payable also increases, right now labelling it as credit card surcharge they probably account for it as bank fees.

You can still deduct it as bank fees when you get charged the credit card costs from the service provider. The only difference is how you label it and how the customer sees it on the bill.