I have a love-hate relationship with Afterpay.

The patriotic version of me is proud to see an Aussie fintech unicorn taking on the world. A brand that is changing the way consumers use credit.

On the flip side, the fiscally responsible accountant in me despises it. A company that profits by promoting consumerism to instant gratification seeking millennials and Gen Z.

The same millennials who brunch on smashed avocado toast and whinge about housing affordability.

Part of this conflict is that I am technically a millennial.

So why aren’t I an Afterpay customer?

I’m not the type that sits on my iPhone 12 Pro, impulse buying Yeezys and Supreme crowbars that I can’t afford.

Perhaps the accountant in me overrides my ability to appreciate ‘culture’.

Okay, I’m boring — and Afterpay goes against everything I believe in when it comes to developing strong financial habits. This worldview has tainted any interest in this business.

For the same reason I don’t understand why people willingly spend thousands of dollars on sneakers, I haven’t invested any of my own money into Afterpay.

This ignorance has been at the opportunity cost of a great financial investment.

After several blog posts on why I don’t like Afterpay, I finally made time to dive into the economics of why the company is so successful.

To help me unpack Afterpay’s business model and dissect the financial levers of how it makes money.

BNPL companies like Afterpay earns their revenue in two ways:

It earns revenue from the customer and retailer — hence why it positions itself as a ‘platform’. 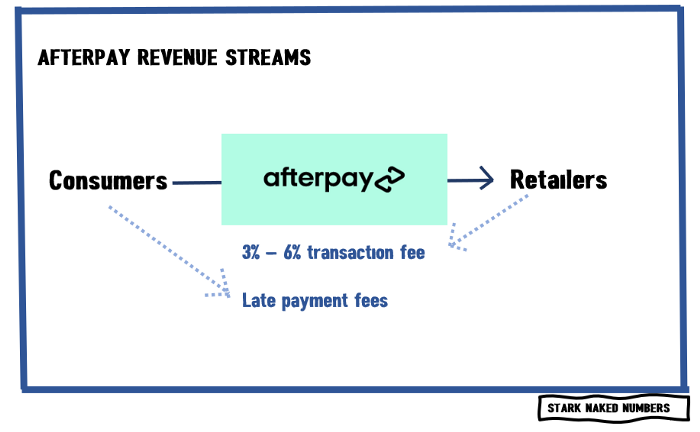 These transaction fees are the main revenue driver, representing 85% in FY20.

Merchants pay Afterpay a commission, referred to as Afterpay Income. This commission ranges between 3% to 6%. The more volume you do with them, the lower the rate I gather.

In FY20, the income as a percentage of underlying sales, or Gross Merchandise Value (GMV) transacted through the platform was 3.9%.

This indicates that there is a portion of retail partners that pay less than 4% of fees to Afterpay.

Hot Tip: If your retail business offers Afterpay and you’re paying more than 4%, then perhaps it’s time to get a price check.

There are costs of sales associated with earning Afterpay income.

Afterpay’s cost of sales include:

After deducting these variable cost of sales, Afterpay’s gross profit was 2.25%, referred to as Net Transaction Margin (NTM).

In other words, for every $100 that you spend using Afterpay, the company collects $2.25 of gross profit. 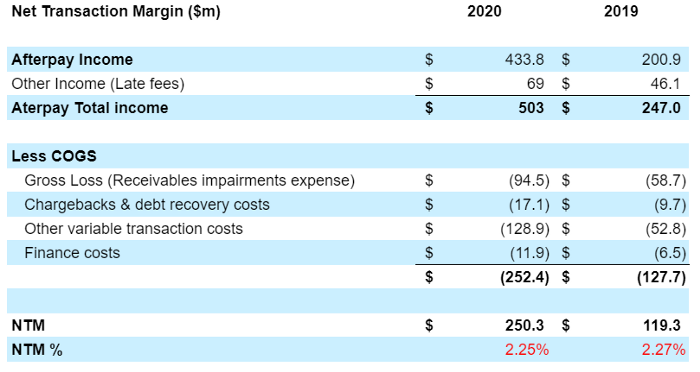 Is that good, or bad? Let’s uncover the sensitivity of these variable costs.

The entire premise of Afterpay and other BNPL platforms is that they provide consumers flexible financing. Want the Yeezys but no cash? No problem, get them now and pay over six weeks.

But what if the consumers can’t afford the repayments? Afterpay carries this risk. A cost of doing business. Because Afterpay doesn’t exactly know who may default on their payments, they guesstimate it and provision for these costs via a bad debts expense.

Other transaction costs comprised ~25% of Afterpay income, or 1.2% of underlying sales in FY20. These variable costs are processing fees. As Afterpay is not a bank, it leverages third-party payment infrastructure. Interestingly, the financial report doesn’t disclose who these providers are, however one could speculate it is Visa or Mastercard… the very competitors they are trying to disrupt? I’ll come back to this.

Like most businesses, a constraint to Afterpay’s growth is working capital. Afterpay needs cash to fund the gap from when funds are paid to its retailers to when it eventually receives the cash from consumers in six weeks.

Let’s break this down. Say you buy a $1,000 pair of Yeezys via Afterpay. The retailer will get paid $940 upfront, being $1,000 less a 6% commission. On the same day, Afterpay collects its first installment from the consumer of $250. Afterpay is out of pocket by a total of $690. Aftepay will collect the remaining $750 from the consumer over six weeks. 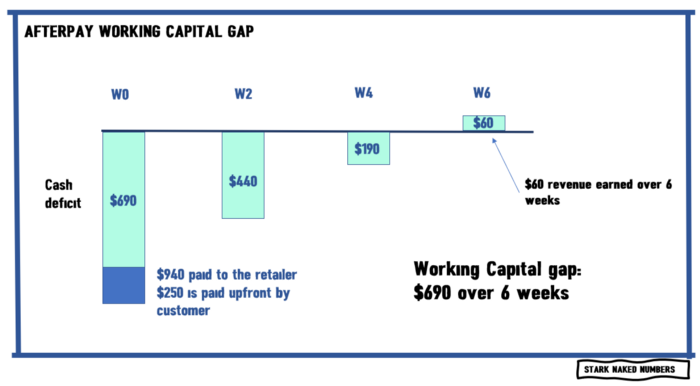 Afterpay needs capital to fund this $690 gap. It does so by borrowing from several Tier 1 lenders: Goldman Sachs, CitiBank, Bank of New Zealand and NAB. The average interest rates on these facilities ranged from 1.65% to 3.2% in FY20.

So summing up, after starting with a 4% merchant fee, Afterpay’s Net Transaction Margin drops to a mere 2.25% after paying transaction fees, interest and bad debts.

Doesn’t sound that special, does it?

But here comes the big reveal that gets investors salivating about the BNPL business model.

It boils down to the company’s velocity of recycling capital.

Traditional banks make money by earning the difference of interest between what they charge to borrowers (mortgage holders), versus what they pay to depositors (savers). Most banks make a net interest margin of ~2% per annum.

But what the banks earn in a year, Afterpay makes in six weeks. Customers are required to repay Afterpay over 42 days (six weeks), and Afterpay makes the same amount of commission even if they decide to pay it earlier.

In fact, it’s better for Afterpay if customers pay off their debt faster, because it means that Afterpay can redeploy the capital faster.

To put this in practical terms, let’s assume that a consumer spends on average $100 per transaction via Afterpay.

If this consumer only uses Afterpay once per year, Afterpay makes $2.25 per year of transaction margin and a 2.25% Return on Capital (ROC) before operating expenses.

But if the consumer uses it 10 times per year, Afterpay makes $22.50 per year. The initial $100 of capital that Afterpay borrowed is redeployed every time a new transaction is made. The return on capital is now 22.50% because the same $100 is now generating $22.50 of annual net transaction dollars.

In its FY20 report, Afterpay reported that its longest cohort of users are transacting up to 25x per annum — which implies that Afterpay could be generating a whopping 56% of ROC per annum on its oldest users. 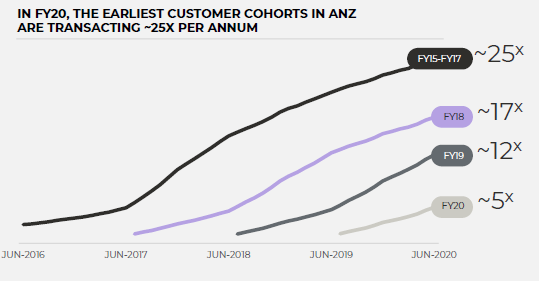 Coupled with explosive customer growth, you can start to paint a picture of why Afterpay has been one of ASX’s highest-performing growth stocks.

But is this sustainable?

The BNPL sector has been flooded with competition.

CB Insights reports there are over 50 BNPL globally. There are 10 listed on the ASX.

Apple announced it too will launch its own BNPL — a trillion-dollar megabrand that already has global distribution.

The ability to finance purchases is being commoditised.

BNPL is a feature, not a product. 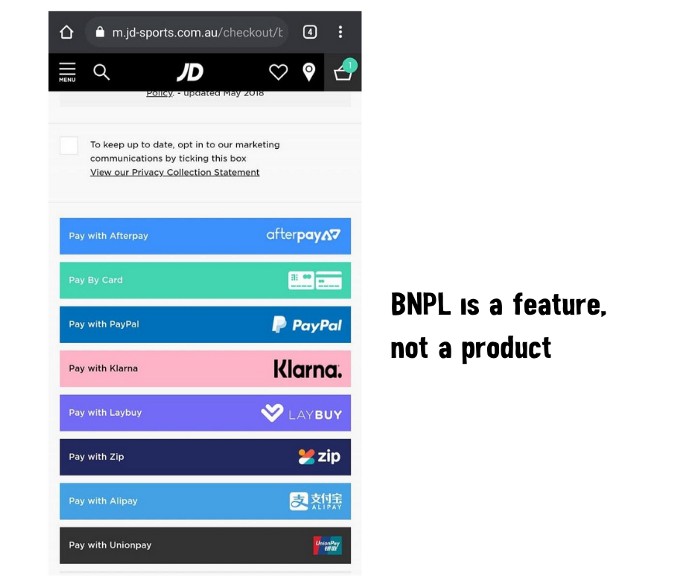 When assessing the risks of Afterpay’s business model, everyone points to the risk of higher bad debts and higher interest rates. These are valid, but the less obvious consideration is the threat of a slowdown in its recycling of capital.

With increasing BNPL options available to consumers, and a limited share of wallet, it’s not untenable to think that consumers would transact less with one platform over time.

As we noted, Afterpay’s earnings power is directly correlated to its customers’ transaction frequency.

The other impact of competition is pricing power.

I’ve been publicly critical of Afterpay’s commission structure and the financial impact to retailers and merchants. Increased BNPL options have retailers questioning which provider they should partner with. Price is always a primary consideration, especially in this environment where BNPL is being commoditised.

CBA’s latest offering is by far the friendliest option in the Australian market, with no additional costs to businesses above CBA’s standard merchant fees. That’s potentially 2%-4% cost savings for many retailers. Adding or removing a BNPL from a Shopify store is only a few clicks away.

The execs of Afterpay are aware of this and taking steps to diversify their products: their latest move is Money by Afterpay, a banking app targeting their Gen Z customers. It even has a savings account!

Whether you’re bullish or bearish on Afterpay, there’s no doubt it has been a great investment for shareholders.

I’m still not one, and I’ve made peace with the opportunity cost. Because I take solace in the fact that my narrative is consistent at least.

Delayed gratification for the win.

Australia’s financial counsellors have called the ad "disturbing" and "inappropriate", and have reported the campaign to Ad Standards in an attempt to have it removed.

Brilliant article Jason. As a CPA myself, a lot of your thoughts on the BNPL resonated with me.

They obviously already have customers using them multiple times per year for the 2020 report. Doesn’t that mean the real margin per transaction is much, much less than the 2.25 %?