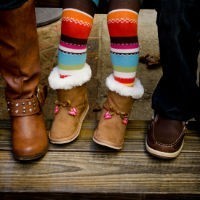 Fairfax reports Anchorage Capital will pay around $20 million for the retail chain, which operates 24 stores across the country.

News of the acquisition comes just four months after Anchorage picked up the Brand Collective business in November and six months after selling its remaining 20% stake in electronics retailer Dick Smith for $105 million.

Led by managing director Phil Cave, Anchorage is credited with the turnaround of Dick Smith, which it picked up from Woolworths in 2012 and floated 15 months later. Anchorage is estimated to have made a profit of $370 million from the turnaround.

According to Fairfax, Anchorage plans to bolt Shoes & Sox on to Brand Collective, which includes the Volley and Grosby shoe brands and licences for show brands Hush Puppies and Clarks and clothing brands Superdry and Mossimo.

Anchorage is also expected to add more stores to the Shoes & Sox network. According to Fairfax, the current owners and management team of Shoes & Sox will stay on with the business.

Shoes & Sox opened its first store in Westfield Chatswood in New South Wales in 1987 with the aim of offering the best-fitting children’s shoes at “family-friendly prices”.

The first Victorian store was opened in the Melbourne suburb of Malvern in 1996 and by 2010, the retailer had 20 stores operating on the east coast of Australia. In 2013, the company started selling shoes online.

The family-owned business employs more than 200 people and stocks prominent Australian shoe brands including Clarks, Harrison and Roc, along with its own brand Ciao. International brands found in Shoes & Sox stores include Converse, DC and Vans, as well as sports labels Nike, Adidas and New Balance.

Brian Walker, chief executive of the Retail Doctor Group, told SmartCompany Shoes & Sox has enjoyed success as a “niche player” in the Australian footwear retail sector, choosing to compete on customer service and shoe fittings in a similar way to Athlete’s Foot in the adult shoe market.

“The capital [from the sale] will provide growth but clearly it will need to be selective growth based on the company’s previous success,” Walker says.

“They would have learnt a lot of lessons,” he says.

But Walker says partnering with private equity usually means a “cultural change” for a family-run company like Shoes & Sox.

“Classically, private equity is about getting in and driving the business harder, making more returns and getting out,” Walker says.

“You have a family-run niche business being purchased by a private equity company, which by definition will want to expand and grow the business and grow the returns. It will be a delicate balance.”

SmartCompany contacted Anchorage Capital but did not receive a response prior to publication.

SmartCompany contacted Shoes & Sox but comment was not available prior to publication.