App helps entrepreneurs get tight with the in crowd 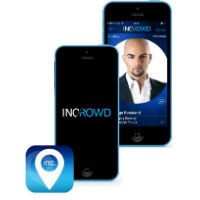 While George Konstand enjoyed meeting new people at startup conferences, he often left frustrated that he wasn’t meeting the right people, in the right industry.

So he did what all startup founders do, set out to solve the problem. Konstand created inCrowd Entrepreneur, a networking app for those in the startup industry to help facilitate better networking.

The app, which launched on the Apple App Store on Thursday, uses geolocation to allow users to find out more about nearby entrepreneurs. It will display all the entrepreneurs and investors signed up to the platform within a 50 kilometre radius. Users can narrow the list down via categories like business phase, industry and the type of relationship they’re looking for – whether it be mentors, investors, or just another founder to talk to. Introductions can also be made through the app’s chat feature.

“With InCrowd Entrepreneur, the overarching goal was to design an app that enables entrepreneurs to create the opportunities they seek. More often than not progress is stifled as they cannot find the relevant business partners or support networks to tap into – the ‘in crowd’. Which is where the name comes from.”

The app will be available worldwide and Konstand, who is based in Sydney, says he hopes that it will be a useful tool for entrepreneurs when overseas looking for networking opportunities

“We’re adding value to your networking, here’s where we differ from LinkedIn. You connect first chat, then meet if you chose to, as opposed to LinkedIn whereby you connect with contacts and get in touch with them when you need to,” he says.

“We’re all too often facing similar challenges so the ability to share them and workshop solutions will be a huge advantage.”