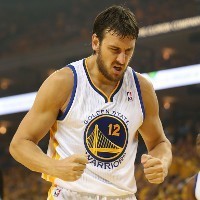 Andrew Bogut has taken the NBA by storm playing for Golden State Warriors.

Professional sport is a lucrative business in Australia but most of the money earned by Australia’s sporting elite comes from offshore.

The 50 sporting stars on the 2014 BRW Top 50 Sports Earners list raked in a combined $164 million from salaries, prize money and commercial endorsements last year, up from $158 million in 2013.

Leading the charge this year is basketballer Andrew Bogut, who has earned the top spot on the list for the fourth year in a row with yearly earnings of $16.2 million

Bogut plays for the Golden State Warriors in the US National Basketball Association and is in the second year of a three-year contract. The majority of Bogut’s income comes from his contract with the Warriors, which will earn him a minimum of $36 million over three years, plus incentives.

Bogut is one of 17 members of this year’s list to primarily earn the bulk of their income in international markets, with the top seven high-earning Australian sportspeople earning their millions in the US and benefiting from a strong US dollar.

The second highest-paid Australian sportsperson is golfer Adam Scott, whose win at the 2013 US Masters has given his $15.5 million bank balance a significant boost. But unlike Bogut, Scott makes most of his cash from global sponsorship deals with Japanese fast fashion giant Uniqlo, watchmaker Rolex and car maker Mercedes-Benz.

Fellow golfer Jason Day comes in at third place, earning an estimated $10.65 million in 2014. According to BRW, Day is ranked as the fourth best golfer in the world and finished in the top 10 of several major events in 2014.

Marcos Ambrose is the highest ranked motor racing driver, securing the fourth spot on the 2014 with his $5.65 million in income last year, while Socceroos star Tim Cahill rounds out the top five, earning $5.5 million last year, largely thanks to his contract with US club New York Red Bulls.

Shane Watson and Mitchell Johnson are the only cricketers to make the top 10, but they are joined by another 11 cricketers in the top 50. Watson earned $4.5 million last year, thanks in part to sponsorship deals with Asics and Tag Heuer, while Johnson’s income is estimated to top $4.1 million.

Just two women made this year’s list: surfer Stephanie Gilmore with income of $1.75 million and golfer Karrie Webb with $1.28 million in earnings.